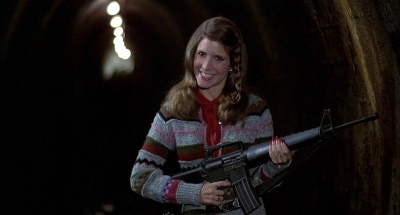 Carrie Fisher holds a Colt SP1 as Mystery Woman in The Blues Brothers (1980).

Carrie Fisher was an American actress/author who was best known for her role as Leia Organa in the Star Wars film franchise. In addition, she had appeared in such films as The Blues Brothers, The 'Burbs, and Sorority Row as well as becoming a best selling writer of such autobiographical novels as The Princess Diarist and Postcards from the Edge, the latter of which she adapted into a 1990 feature film that starred Meryl Streep and Shirley MacLaine. She also was the daughter of actress Debbie Reynolds and entertainer Eddie Fisher. She passed away on December 27, 2016 after suffering a heart attack on a plane returning to Los Angeles. In a sad turn of events, her mother Debbie Reynolds passed away less than 24 hours later.