From Internet Movie Firearms Database - Guns in Movies, TV and Video Games
Revision as of 16:07, 17 July 2022 by PyramidHead (talk | contribs) (While 15-round magazines are illegal in California, it's not completely impossible for a gun owner to possess them... there's grandfathered magazines, the mass buying of high-cap mags during "Freedom Week", among other methods.)
(diff) ← Older revision | Latest revision (diff) | Newer revision → (diff)
Jump to navigation Jump to search

Jessica Davis (Alisha Boe) shows off her father's Glock 19 to Bryce Walker (Justin Prentice) and pressures him into handling it in "Tape 5, Side B" (S1E10). She says it's a Glock 19 and it's her "favorite gun" and that it "holds 15 rounds" which she is correct about, but since the show takes place in California, 15-round mags are officially illegal due to California's strict laws regarding so-called "high-capacity" magazines. 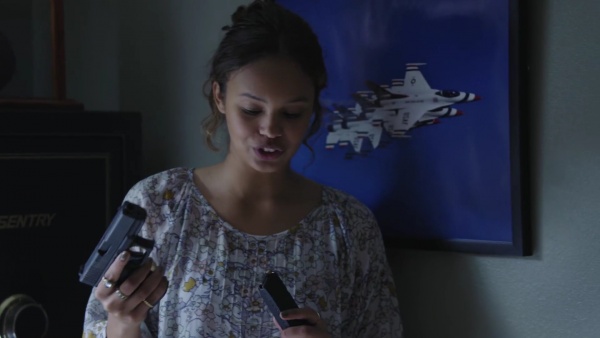 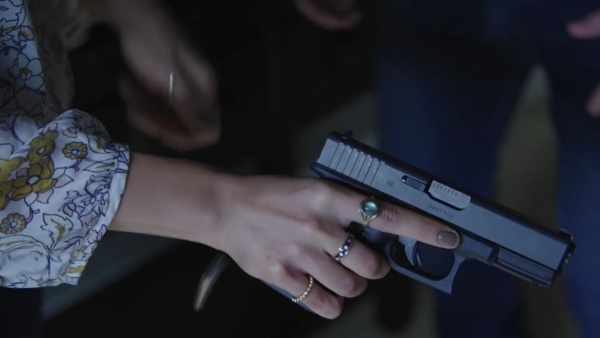 Jessica unchambers a round, providing a very clear shot of the Glock 19. 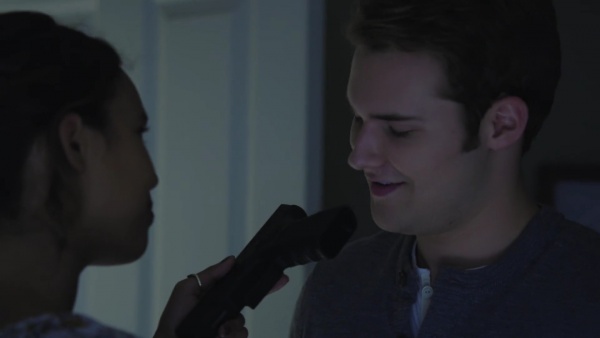 "Is there a KFC around? Because I smell chicken."
Jessica pressures Bryce into taking it. 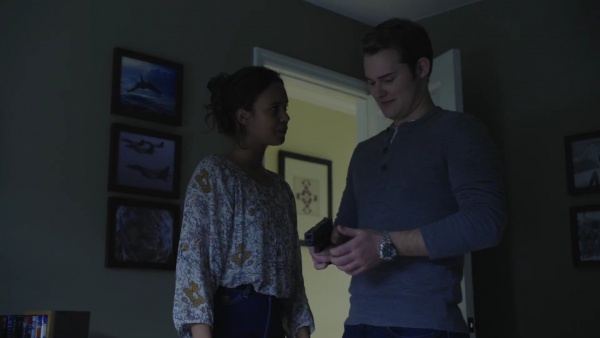 Bryce after taking it 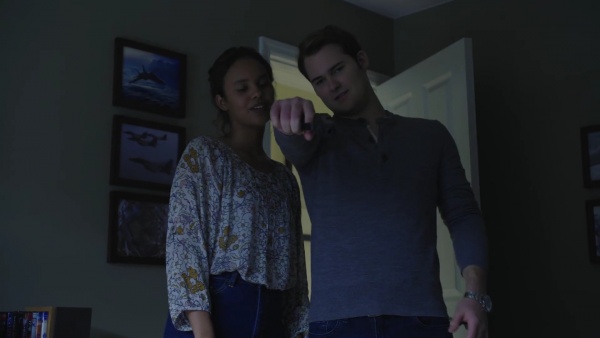 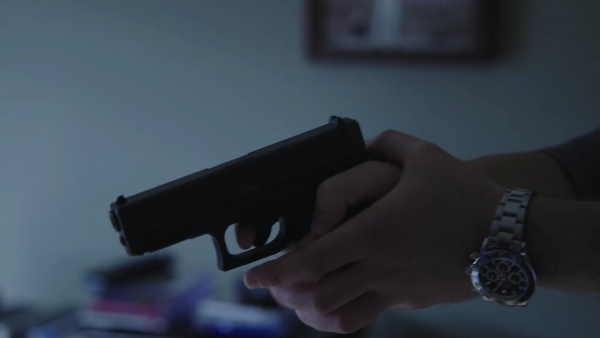 Jessica directs his hands to correctly hold the gun. 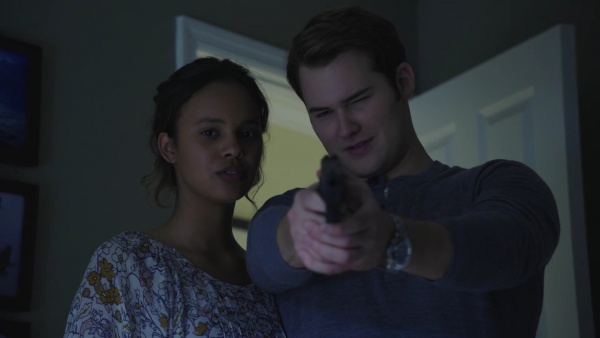 Before Justin Foley (Brandon Flynn) runs away from home, he steals Seth Massey's (Matthew Alan) Heckler & Koch USP from his stash in "Tape 6, Side B" (S1E12). 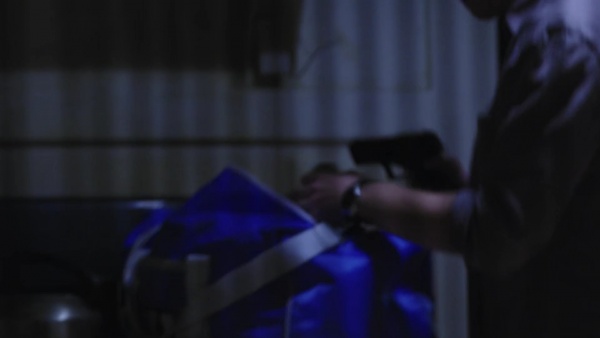 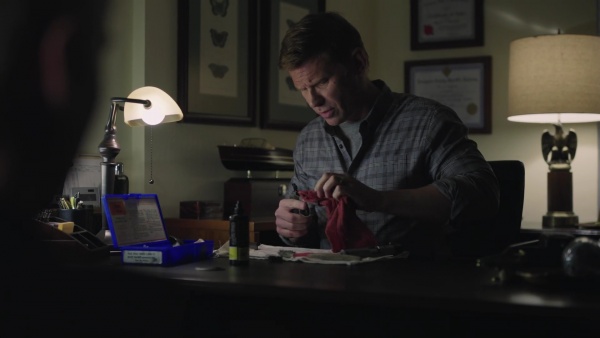 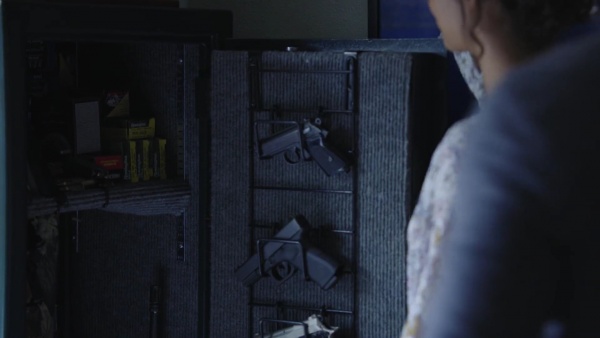 Jessica sneaks into her father's safe in "Tape C, Side 2" (S1E06). The guns being shown are as follows: an AR-15-type rifle, Walther PPK, and the Glock 19 she later handles. 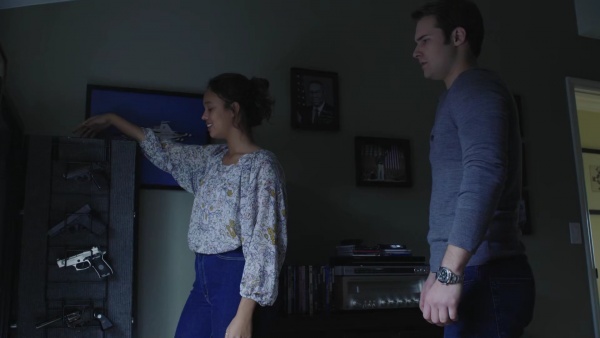 Another angle of the safe being shown. A Kimar Model 85 and Colt Official Police is seen.

In season 1's finale "Tape 7, Side A" (S1E13), Tyler Down (Devin Druid) adjusts his cache of illegally purchased firearms, ammunition, and homemade pipe bombs. Note: in "Tape 6, Side B" (S1E12), Tyler illegally purchased a handgun covered with a cloth (heavily implied to be the Kimber Ultra Raptor) and it is mentioned that it "has a bit of a kick". Since it is not clearly shown enough for an ID, it's not in one of entries above. 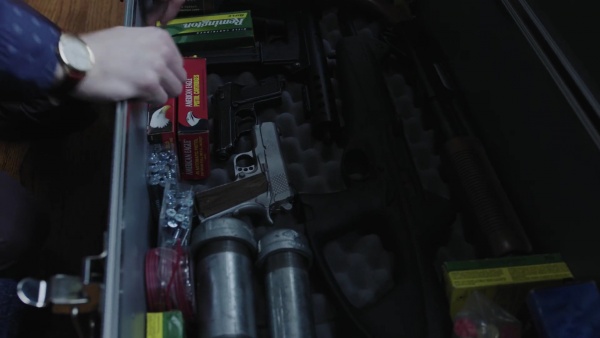 Tyler's cache in Season 1's finale "Tape 7, Side A" (S1E13). The following guns are seen: the aforementioned Kimber Ultra Raptor, Walther PPK (which appears to be the same prop shown in Jessica's father's gun safe), Intratec TEC-9, Beretta Cx4 Storm, sawed-off Remington 870, homemade pipe bombs, and Federal American Eagle branded .45 ACP ammunition along with Remington ammunition in an unknown rifle caliber, although none of the firearms seen in this cache chamber rifle ammunition. Note the filled-in hammer on the Kimber, meaning it's a rubber prop and the other guns appear to be rubber and/or airsoft replicas.
Retrieved from "https://www.imfdb.org/index.php?title=13_Reasons_Why_-_Season_1&oldid=1510260"
Categories: