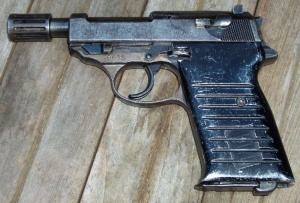 A reproduction of the P38-based custom pistol from the original TV series, made by TheUncleGun.com. 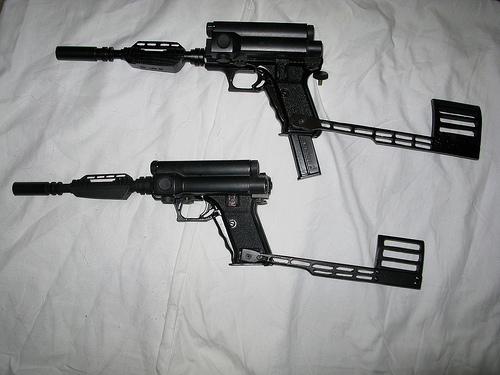 The customized pistol is the primary weapon used by the U.N.C.L.E. operatives in the 1960's television series The Man from U.N.C.L.E. that starred Robert Vaughn and David McCallum. The first version of the weapon was built off a 1934 Mauser Pocket Pistol, but the Mauser was too small for the extra accessories, and the .32 ACP blanks didn't cycle reliably, and thus was only used for one episode. The second, and most famous version, was a modified Walther P38 with a shortened barrel and a threaded muzzle. A number of accessories were built for the pistols by studio armorers including a shoulder stock, (non-functional) sight mount, extended magazine, silencer and barrel extension. A third version, built off of a Heckler & Koch P7M8, was introduced in the 1983 reunion film, with similar attachments. Yet another version, built off of a Walther GSP, was introduced in the 2015 feature film.

The P38-based version was also well-known a generation later as the alternate form of the Decepticon leader Megatron in the animated series and toy line Transformers. Originating in Takara's "Microman" toy line as the "MC-12 Gun Robo," the toy is a reasonably faithful replica of the P-38 special including the stock, barrel extension and scope accessories.

The UNCLE Special has appeared in the following: