The Thing is a 1982 horror film directed by John Carpenter and reunites him with his Escape from New York star Kurt Russell. The film is a remake of the 1951 classic The Thing from Another World and a prequel to this film was released in 2011.

Blair keeps his revolver in a desk drawer.

Blair takes his gun after reading that there's a 75 percent chance of someone being infected.

Blair with his revolver.

Garry (Donald Moffat) carries a Colt Trooper Mk III in a holster on his duty belt. Midway through the film MacReady (Kurt Russell) gets possession of Garry's revolver and carries it with him from then on.

Garry fires his Colt Trooper MkIII at the Norwegian

MacReady with the Trooper MkIII.

A Heckler & Koch HK93A2 semi-auto rifle with a scope and a 40 round magazine is used at the beginning of the film by the Norwegian with Rifle (Kurt Russell's brother-in-law at the time of filming Larry Franco) to try and kill the infected dog while flying in the helicopter. After the helicopter lands, the passenger hands it to the pilot (Norbert Weisser), who pursues the dog on foot. This scene has in part been reproduced for the prequel, and the passenger renamed Lars. Interestingly, any viewers who speak Norwegian would have the early reveal of the movie ruined in this very first scene, as the armed man explains the nature of the threat.

While Norway has never officially used the HK33 or HK93 in any role, most of the Norwegian defence force used a Norwegian clone of the G3 on license, called the AG3, as the primary issue rifle from 1962 to 2005. The use of the HK93 could therefore be a homage to the AG3, or possibly be used simply because a G3, AG3 or HK91 was not available to the film armorer.

The Norwegian passenger fires the H&K HK93 from the helicopter.

The Norwegian passenger with the H&K HK93.

The Norwegian pilot takes aim at the dog.

A close up of the rifle.

MacReady (Kurt Russell) carries a Ithaca 37 shotgun several times in the film. At one point Windows (Thomas G. Waites) manages to grab one before he is subdued by the others.

MacReady with the Ithaca Model 37 at the Norwegian base.

Closeup of the muzzle when at the Norwegian base.

MacReady right before shooting at The Thing. 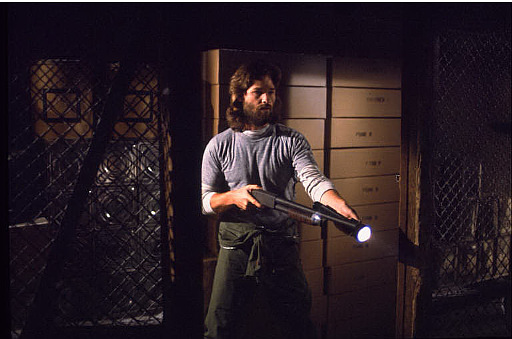 Closeup of the muzzle of the 37 when shooting at The Thing, which is an obvious blank.

Windows breaks the glass to the gun safe to get a shotgun, note also the HK93.

Windows with the Ithaca Model 37 from the gun locker, Garry points his revolver at him.

This flamethrower is used by several members of the team throughout the movie. Palmer uses a different flamethrower, apparently a propane powered model sold commercially, used for burning weeds, and removing ice from planes and other equipment; the flame on the propane model is very short, at most usually 7 feet. Even so, many scenes in the film use genuine, military-spec liquid-fueled flamethrowers, something of a rarity in movies. 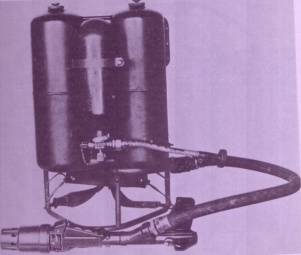 Childs and Palmer holding the flamethrowers.

MacReady with his M2A1-7 flamethrower.

MacReady fires the flamethrower at The Thing, notice the heat wave pinball machine beside him, ironic.

MacReady fires the flamethrower at The Thing.

The Norwegians use several AN/M14 incendiary grenades at the start of the film. 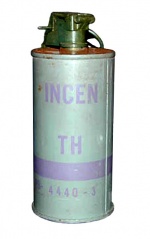 The Norwegian right before throwing the grenade.

The writing on the grenade looks like thermite.
Retrieved from "http://www.imfdb.org/index.php?title=Thing,_The_(1982)&oldid=1384765"
Categories: