War at Home, The

From Internet Movie Firearms Database - Guns in Movies, TV and Video Games
(Redirected from The War at Home)
Jump to: navigation, search 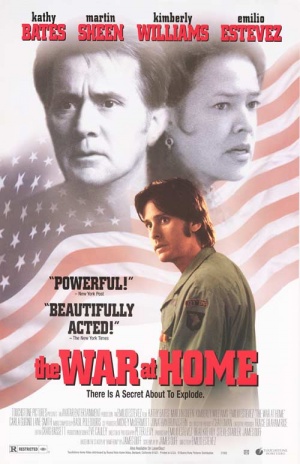 The War at Home is a 1996 drama directed by Emilio Estevez and written by James Duff (the creator of The Closer). Estevez stars in the film as a young Vietnam veteran who has difficulty adjusting to civilian life and his family, including his overbearing father (portrayed by Estevez's real-life father Martin Sheen). The War at Home marked the third feature film dealing with the Vietnam War that featured in the cast a member of the Sheen family (as his father Martin Sheen starred in 1979's Apocalypse Now and brother Charlie Sheen in 1986's Platoon).

The following weapons were used in the film The War at Home:

The M16 rifle is carried by US troops in Vietnam, including Jeremy Collier (Emilio Estevez).

The original M16, the first version, firing in a 20-round magazine, adopted in large numbers by the U.S. Army in Vietnam. It would later be replaced by the upgraded M16A1 - 5.56mm

US troops carry the M16 in Jeremy's flashback.

The M60E3 machine gun is carried by US troops when Jeremy experiences flashbacks to Vietnam. This is anachronistic as the E3 Model was not introduced until the 1980's.

The anachronistic M60E3 machine gun is carried by US troops when Jeremy experiences flashbacks to Vietnam.

The M1911A1 pistol is seen in the hands of some of the soldiers in the flashback to Vietnam.

Soldiers in the center appear to carry the M1911A1 in Jeremy's flashback.

A Colt MK IV Series 80 pistol is carried by the Lieutenant (Michael Wiseman), who later gives it to Jeremy Collier (Emilio Estevez). Jeremy is then seen holding the pistol to threaten his father Bob Collier (Martin Sheen). This pistol also is anachronistic.

Jeremy holds the pistol during a confrontation at home.

The M26 Hand Grenade is carried by US troops in the film.

The Lieutenant (Michael Wiseman) has the M26 grenade on his webgear.
Retrieved from "http://www.imfdb.org/index.php?title=War_at_Home,_The&oldid=1088840"
Categories: