From Internet Movie Firearms Database - Guns in Movies, TV and Video Games
(Redirected from The Relic)
Jump to: navigation, search 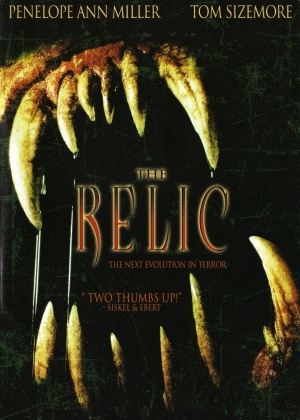 The Relic is a 1997 science fiction horror film directed by Peter Hyams and starring Tom Sizemore as Lt. Vincent D'Agosta, a Chicago police detective who together with evolutionary biologist Margo Green (Penelope Ann Miller) discover a deadly secret hidden in an ancient artifact sent to Chicago's Museum of Natural History.

The following weapons were used in the film The Relic:

Officer Bailey (Tico Wells) brings up the rear of the party escaping the museum through the sewer, with his Beretta drawn.

A Remington 870 is carried by Det. Hollingsworth (Clayton Rohner), notably when he's leading the museumgoers through the tunnel system.

A Remington 870 is carried by Det. Hollingsworth (Clayton Rohner).

After the museum is sealed following the Kothoga attack on the gala, Chicago HBT officers attempt to breach the museum, armed with what appear at first to be Heckler & Koch MP5A3 submachine guns. They are never seen using the weapons to fire upon the creature. Close examination suggests that weapons seen in the film are actually the partially-converted HK94A3 carbines seen often in action movies during the 1980s and 1990s.

A Heckler & Koch HK94A3 (9x19mm) converted to a resemble an MP5A3, with a chopped barrel and converted to auto, with a third firing position added to the lower receiver.

A Chicago HBT officer repels into the museum with an HK94A3 slung. The weapon is an HK94A3, as evident from the all-metal trigger group and lack of barrel lugs. Note that this HBT officer is not wearing a helmet, nor is he using a Surefire flashlight grip on his weapon, which would be expected for an operation in a darkened environment.

Vincent D'Agosta (Tom Sizemore) carries a bullet (which looks like a 9mm) around as a good-luck charm throughout the film. During the latter half of the film, he tells an anecdote that explains how he became so superstitious. While patrolling during his rookie year, he noticed a man who'd locked himself out of his car, and went over to help him out, when the man - an armed robber - turned around with a pistol and shot at D'Agosta at point-blank range, yet the weapon misfired. Later, the police lab examined the bullet and told him it was flawless and there was no reason - other than "plain, old fashioned good luck" - why it didn't fire.