From Internet Movie Firearms Database - Guns in Movies, TV and Video Games
(Redirected from The Notebook)
Jump to: navigation, search 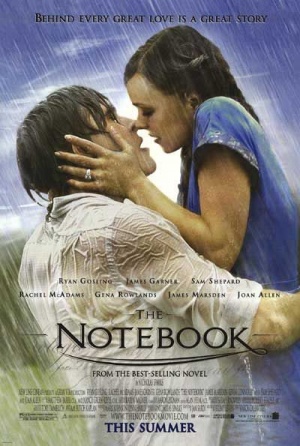 The Notebook is a 2004 romantic drama that was adapted from a book by Nicholas Sparks (the author of the similarly-themed books The Lucky One and Dear John). The film stars Ryan Gosling, Rachel McAdams, James Garner and Gena Rowlands (whose son Nick Cassavetes directed the film).

The following weapons were used in the film The Notebook:

When fighting in Europe as a soldier with Patton's Third Army, the young Noah Calhoun (Ryan Gosling) is armed with a M1928A1 Thompson.

Noah marches with his fellow soldiers during what is implied to be the Battle of the Bulge.

The M1 Carbine is seen carried by several soldiers of the Third Army during the German attack.

A soldier seen with the M1 Carbine.

On the left, a soldier runs with the M1 Carbine.

The M1 Garand is also another weapon seen carried by several soldiers of the Third Army during the German attack.

A soldier on the left with the Garand.

The young Noah is seen holding a Remington Model 10 shotgun when a couple offers a price for his mansion.

Noah (Ryan Gosling) racks his Model 10 to scare away the couple.
Retrieved from "http://www.imfdb.org/index.php?title=Notebook,_The&oldid=1442324"
Categories: