I remember picking this up from Hollywood Video after seeing a couple of small clips on Youtube and on the recommendation of a coworker and friend of mine. Jesus, did this movie bite. Too much dumb stuff, even for my relatively low standards when it comes to action movies. And John Cena couldn't act his way into the paper bag - never mind out of it. A couple of nice explosions, though - that's about all this movie has going for it. --Clutch 06:59, 20 March 2009 (UTC)

Yeah it sucked pretty bad but it was only $5 in the cheap bin at Wal-mart (I only go there for DVDs, I swear!) and saw some of it on FX and it had some nice close ups. Plus the video quality is nice. - Gunmaster45

Theres only 11 guns in this film? - Oliveira

There's a few more, but don't expect much. There is surprisingly little action in this movie - and what little there is to see is, for the most part, poorly constructed and requires a gargantuan level of suspension of disbelief. I'm talking more than Crank. --Clutch 20:07, 21 March 2009 (UTC)

There's more to come, I've just been busy with other stuff. I'm finishing it now. - Gunmaster45

IMDB.com says that John Cena trained with Real Marines prior to filming.

Clearly a load of shite because Cena was hardly believeable. Agree?

If memory serves correctly, the special features had a behind the scenes featurette about it. While Cena's acting obviously doesn't show it, I'm pretty sure it's actually true. Spartan198 15:39, 28 August 2010 (UTC)

I think it actually is a Valmet M78, as the bottom edge of the receiver changes angle and slopes upwards in front of the mag release in the typical Valmet fashion. Also, if it was an RPK variant it would have the front trunnion bulge, and if it was an AKM type variant (like the NHM-91) it would have the magazine well dimple, which pretty much only leaves the M78. Only sticking point is the furniture, is it possible to put standard wooden AK furniture on a Valmet? I guess it is, with the number of Vektors that are dressed up as AKs in films shot in South Africa. --commando552 05:56, 28 June 2012 (CDT)

While it would be correct, his uniform and rifle aren't correct, so why should we trust that his sidearm is? - Gunmaster45

It looks like a 1911 to me though. the barrel diameter is huge and it just has the shape to it. -The Winchester

At least one of the Al Qaeda is seen using a custom built Norinco MAK-90 with a homemade folding stock and a Galil receiver cover.

How do you know it's a MAK-90? If it doesn't have the thumbhole stock, then a clear shot of the front sight would help. The MAK-90s were forced to grind down the bottoms of the front sight to not allow attachment of the cleaning rod (Don't ask me what the bizarre rationale by ATF was for that piece of regulation). MPM2008 If it's not a MAK-90 then it's a Type 56 or Norinco AK customized.

On an original AK-47 type rifle (by that I mean the gas block and front sight) the bottom of the front sight base is what secures the bayonet (it isn't really a bayonet lug as it wasn't designed for this purpose, but when the decided they wanted a bayonet lug it was a convenient place for it to lock to). Was the MAK-90 a pure US import variant? If so then I think this would be an unlikely weapon as this film had the majority shot in Australia. Also, the top cover isn't from a Galil as the sight is too low profile. To add to the weirdness there is no sign of the original rear sight block which would be there if it was a MAK-90 or another more conventional AK variant, it has a bizarre handguard of a shape I have never seen before, and the pivot for the stock looks really odd. --commando552 (talk) 21:16, 21 January 2015 (EST) 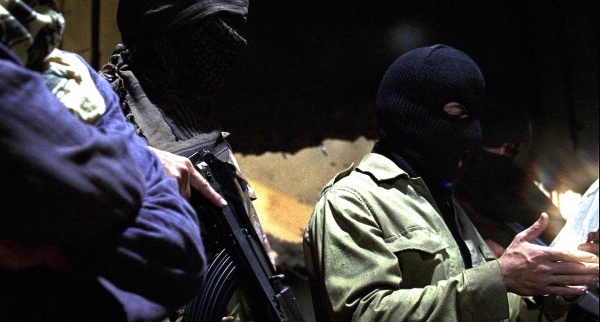 An Al Qaeda terrorist holding a custom built Norinco MAK-90. This guy looks like he actually knows how to use the gun he's holding. 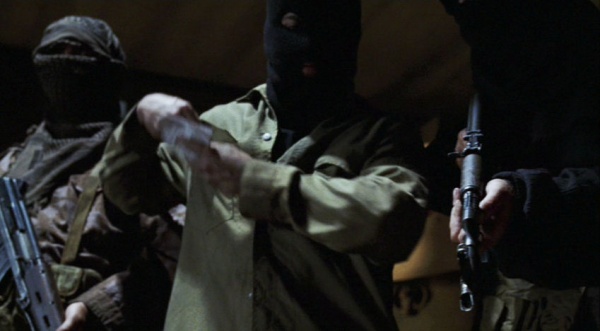 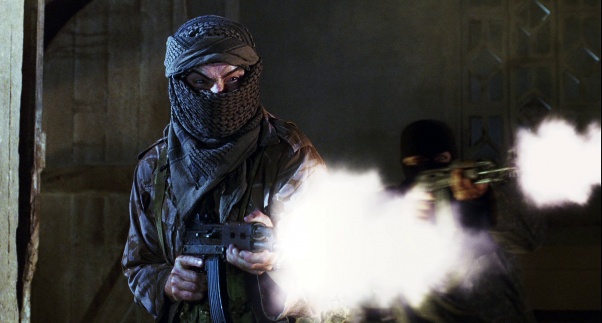 An Al Qaeda firing at Triton. 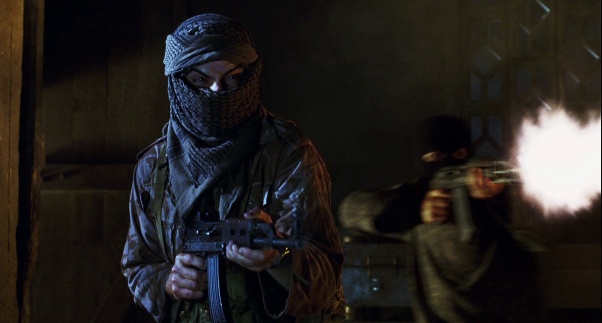 The fighter with the rifle.

One of the Al Qaeda shooting at a US chopper is using an unknown RPK variant. A US Marine is also seen using one taken off a dead Al Queda as he escapes with John Triton (John Cena). It appears to be a Valmet M78 based on the receiver but the muzzle is hard to see. 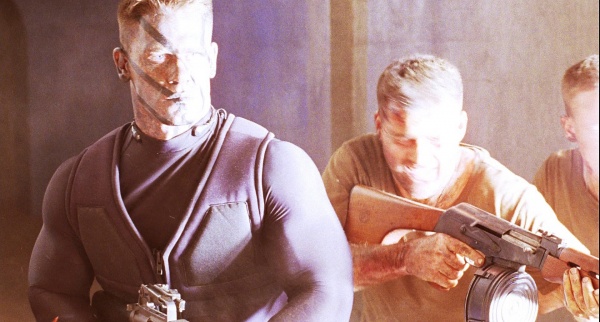 The Marine to the right holds a liberated RPK variant with a 75 round drum. Note "clubfoot" stock. Also note the ridiculous getup Cena is wearing, which is definitely not standard issue to Marines. 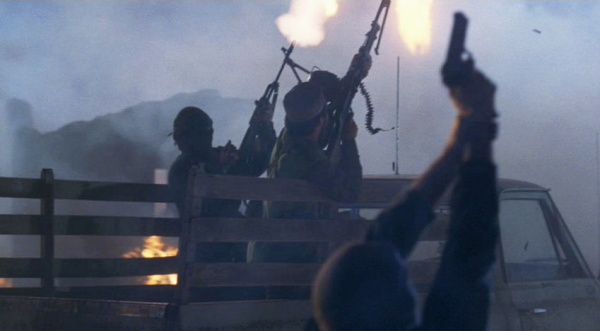