There are several weapons left out of this great movie, gentlemen, so thought I'd mention. There was the ubiquitous 1873 Winchester, a cut down double barrel shotgun that a cousin of the Younger brothers, also named Younger, uses when he and Bob Younger (Keith Carridine) are accosted in the woods by two Pinkertons and is killed and also kills one of the Pinkertons. Cole Younger (David Carridine) is shown in a scene early in the movie, when Jesse is wounded and Ed Miller is expelled from gang, sitting on a horse next to his brother Jim (Robert Carradine) holding a single barrel shotgun.

You need to start screencapping when you get your DVD's ouf storage.And of course make your own page so we know who you are. --Jcordell 16:43, 28 November 2009 (UTC)

Based on that screen-capture alone, I'm not entirely convinced that's a Dragoon. It looks too small in his hand. Not sure it's an 1851 Navy either, though. Would need some more screen-shots to be sure. -- Blokhed 3/30/11

Keith Carradine is clearly holding a Dragoon based on the hook holding the loading lever up under the barrel. The Walker did not have this feature and it's way too big a gun to be a 1851 Navy. Harleyguy 21:37, 9 August 2011

Looks like it is a Walker after all. I can see why you'd think it was a Dragoon, Harleyguy, but let's look at the rest of the details. First off, the barrel is too long for a Dragoon. Second, the barrel frame from the hinge of the loading lever to the cylinder is noticeably longer than a Dragoon or a '51 Navy. And finally, the loading lever screw on the frame is a still in the Walker configuration, being reversed on the later Dragoon and '51 Navy. Look at left-hand profile shots of all three guns -- the head of the screw is clearly visible on the Dragoon and Navy, but on the Walker only the tiny opposite end of the screw is visible on the left side. On the Walker profile page, you'll also notice that both profiles are right-side, and show the flat-head screw head. Sorry this is so long-winded -- I own a Walker and a '51 Navy, and took both out to examine and compare. I think this is simply a very odd Walker with a loading lever latch, either a custom job or a transitional model. But the majority of the evidence all points to a Walker. -- Blokhed 8/12/11

Frank James is seen with a repeater rifle in the barn right before the shootout. The problem is I can't tell if it is a Winchester or an earlier Henry rifle as Frank's rifle has characteristics of both. 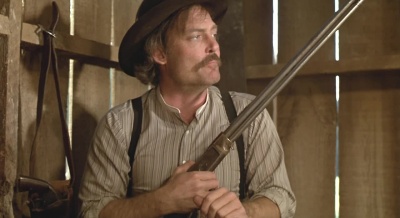 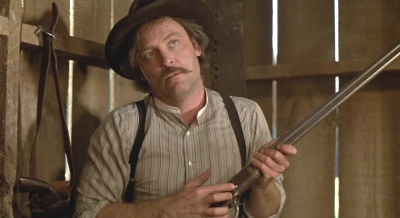 Here he is loading a round into the sideport which the classic Henry rifle did not have as far as I know. 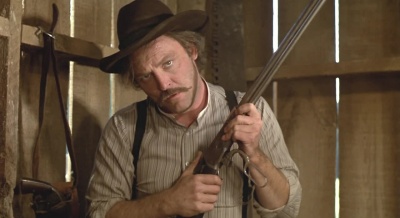 Another view of the sideport. 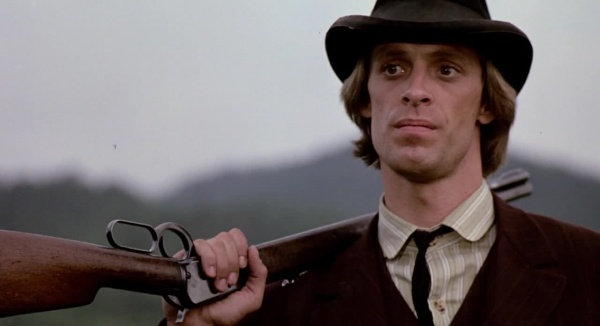 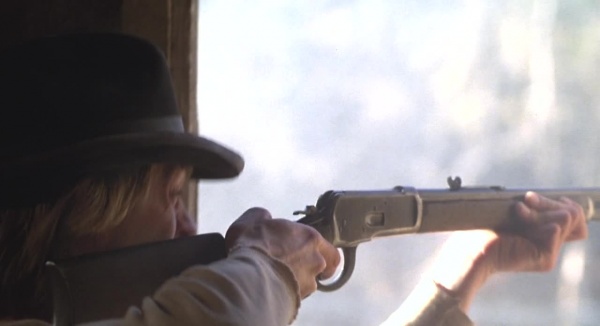 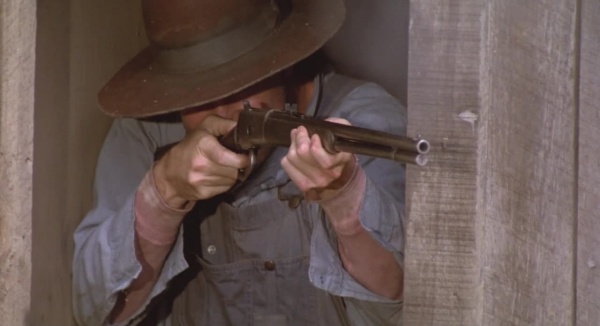 Are you asking or telling? I just updated the existing screencaps, I have no expertise regarding the Winchester models so I did not notice they were incorrect. Dudester32 (talk) 15:38, 7 April 2015 (EDT)

Oh :) Well, I only have what was written in the article: "The Winchester Model 1873 is used by several of the outlaws in the film. You can tell these are '73s and not '92s by the presence of the sliding dust covers on the top of the longer receivers. "
Beyond that I have no idea. Henry & Winchesters are beyond me. Dudester32 (talk) 15:43, 7 April 2015 (EDT)

The last two pics show a pair of Colt 1878 Revolvers with 5 1/2 inch barrels not the movie prop seen in the other pics. Possibly they weren't functioning for shooting scenes and had to be replaced with the prop for firing. I don't know though, I haven't seen this movie. Black Irish Paddy (talk) 08:14, 29 July 2019 (EDT)