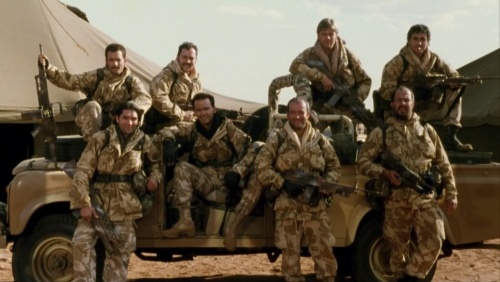 The team poses for a photo just before the mission. 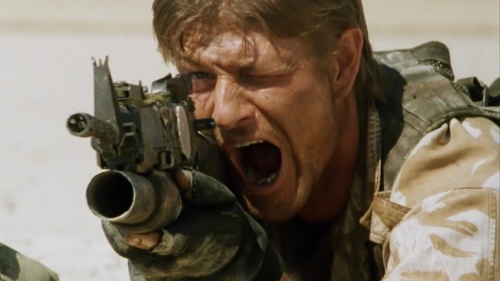 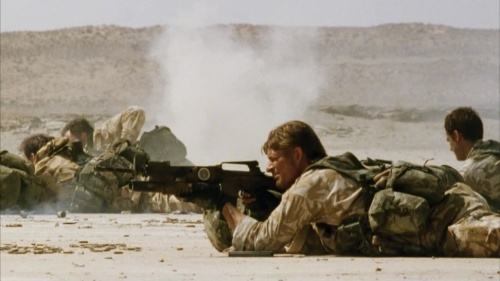 Note the compass attached to his rifle. 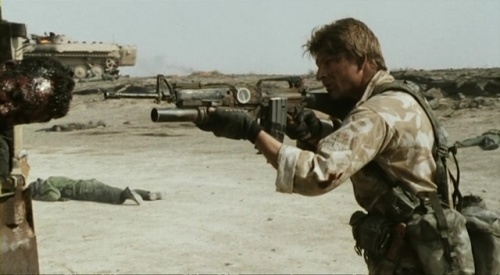 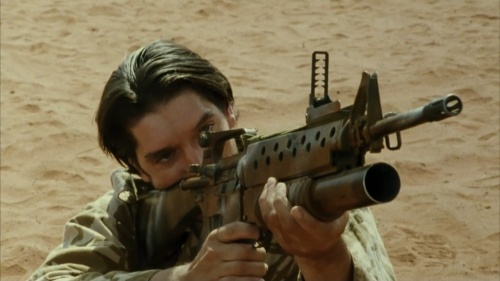 Chris Ryan takes aim with his M203 grenade launcher on the shooting range. 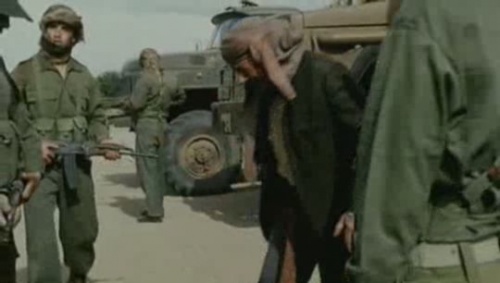 Some of the pictures are captioned wrong the guy with the Minimi and the sunglasses is Mark, the second guy with the minimi is Dinger and the soldier with the LAw is Bob Consigilio(called tony in the movie)

Think it is right now. Have also changed the aprt suggesting there was a 5:3 ration of M16 to Minimis, as unless I am mistaken, it was 50:50, with M16 being used by Andy, Chris, Baz and Ray, and Minimis carried by Dinger, Tony, Mark and Stan. This allotment can be clearly seen when they line up for the photo before the mission, and is the same as the real patrol. Not sure about the movie as I don't have the DVD to hand, but in real life each man carried a LAW 66, and the 2IC Phillips (I think Ray in the film) was the one man to carry a Browning HP, due to the shipment of pistols being lost. They also carried a number or Claymores and C3 Elsie mines in their bergans, along with PE4 and detonators. --Commando552 00:01, 27 November 2010 (UTC)

Just noticed that all of the Minimis used in this seem to have the open front sight of the Canadian C9. They also all seem to have conical flash hiders and Minimi type carry handles, but everything else is a mix. Some have the textured Minimi handguards whilst others have the grooved M249 ones, the sights are a mix of original early Minimi folding and a type I have never seen before (look a bit like an M249 one but there is only one nob on the side and the side shroud is smaller without a hole in it and doesn't cover the whole of the sight itself). It is hard to work out what features each of the 4 Minimis has though, as it is rare to see a clear shot of the whole weapon, and the characters switch weapons between shots so can't piece them together. 3 of the Minimis have tubular steel stocks, but the one most commonly seen being used by Dinger has a bizarre fully skeleton stock that slopes downwards slightly which looks like a bit like the one on an AKS-74 but with a shoulder rest (this gun is also fitted with an open front sight, but it is not the same as the C9 one). Will do some caps at some point as noticed a few missing weapons as well: saw M16A1s and AR-15 SP1s used alongside the M16A2s, a Webley revolver of some sort, a vehicle mounted RPD and few more guns in the stock footage. Will also tidy up the AKs, as I think they are actually converted R4s (or Galils but as it is filmed in SA would guess R4s would be much more likely). --commando552 06:39, 4 January 2012 (CST)