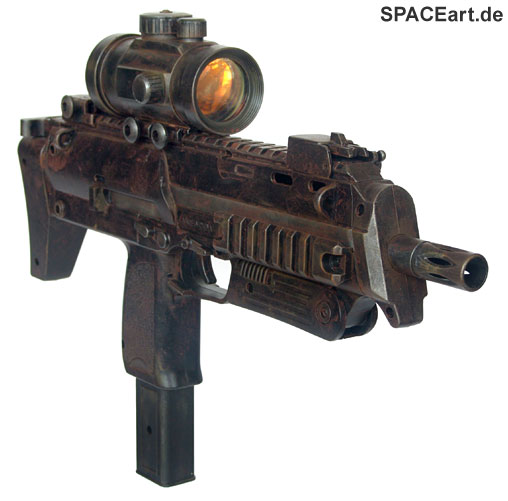 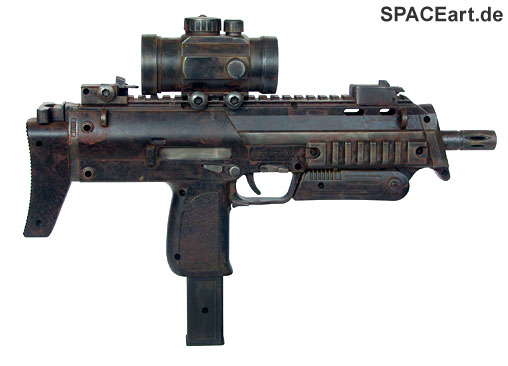 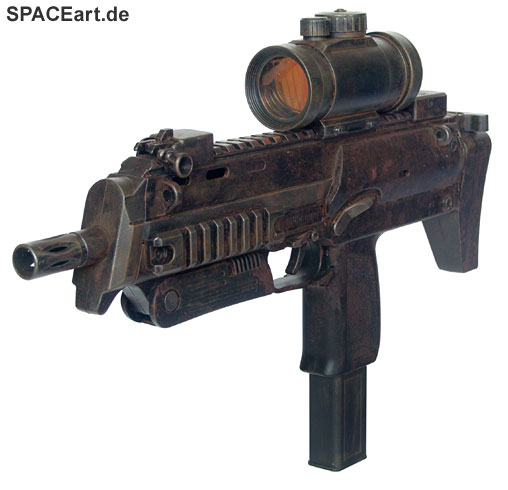 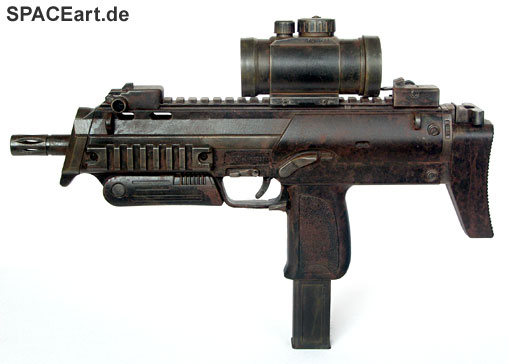 I guess it can be changed, but unlike most of the other cylons, except for caparca 6, Leobin is the name used for the guy anyway. Excalibur01

I was looking through some stuff on Wikipedia the other day and I stumbled across an article about the "Magpul PDR". When I looked at the article I was oddly surprised to see that the concept design for the weapon looks close to this fictional rifle's design.

Seburo MN-23 looks like a a SMG from Borderlands

Gun on a ship

It would not be a little dangerous to shoot firearms in a well-armored Battlestar? Couldn't bullets rebound and wound shooters? And, if they never saw Earth, why they carry some apparently Earth well-known guns like Kalašnikovs and Makarovs?

That's one thing that bothered me too, especially on New Caprica. We're talking about a previously uninhabited planet, and yet the guerrillas had plentiful assault rifles, submachine guns, etc. It'd be one thing if they were picking them off the enemy, but the skinjobs were lightly armed, with the centurions carrying anything heavier. The only explanation I can think of is that the arms came from one of the other vessels that landed, like the Prometheus (the black market ship.) --funkychinaman 17:13, 2 June 2010 (UTC)

Actually you get the impression that the weapons were all cached in and around the settlement "just in case". There are several mentions in the episodes on New Caprica of how things were planned out in case things went to hell. Specifically the Raptor which appears to listen for any broadcasts from the surface. --Charon68 21:07, 2 June 2010 (UTC)

The Raptor was only on station after the Cylons arrived though. And while it would make sense to hide some weapons caches in case the worst happens, we're talking about a group of people who are short on medical supplies and basically living in a glorified refugee camp, with practically no military or police force available to keep order. (There were few marines to start with, and I never saw any LEOs other than the president's bodyguards.) Giving those people access to a cache of automatic weapons seems to be a ticket to anarchy. --funkychinaman 23:33, 2 June 2010 (UTC)
That's what I am saying. The Raptor was only put on station after the Cylons arrived according to a prearranged plan between Adama and Tigh not on the random chance that the humans on New Caprica would be broadcasting some sort of SOS (look at this link http://en.battlestarwiki.org/wiki/Occupation) under "Act I" the 11th point I believe mentions that. It would go without saying then that the weapons were known only to a select few and, by the same point, trained or semi-trained personnel (most of the shooters on the ground were either former Galactica, Pegasus or Anders' people). --Charon68 00:13, 3 June 2010 (UTC)

Right, I forgot. But they had to figure out that the Cylons would have lists of former military personnel and keep close tabs on them if not neutralize them outright, and Anders couldn't have brought that many people back from Caprica. And if they had a plan, you'd think they wouldn't have let the military readiness on both ships fall so far behind. If the arms caches were placed there before the Cylons came however, it's strange that most of them are non-military weapons, like Soviet-bloc weapons. --funkychinaman 01:01, 3 June 2010 (UTC)

Well they never actually named any of the firearms used in the series. They just used them as props. It would be cost too much for "laser" gun special effects, and it would also cost a lot to invent prop guns or shells around existing guns anyway. But I've always wondered about the Cx4 and it is referred to as a "rifle". It fires a pistol round. It also seems that Galactica has a huge stockpile of guns and ammo. Excalibur01 03:09, 3 June 2010 (UTC)

The producers wanted to use "real world" technology, so they used kinetic weapons instead of lasers like in the original. That's why the Cylons used nukes to destroy the colonies, and not some death ray, or whatever the hell they did in the original. (They weren't really clear.) They also never wanted to be really specific with technical details, so they wouldn't be constrained later on. (Thus, no BSG technical manual.) As for ammo, they were able to draw ammo and munitions from a remote armory in the mini-series, and later on, it was shown that the Galactica (and presumably the Pegasus) had ammo production facilities on board. --funkychinaman 03:17, 3 June 2010 (UTC)

IN the original series (and canon books & fiction), the Cylons just shot the hell out of the planets with their standard weapons. Swarms of Cylon raiders scanned the entire surface of the planet with their life signs indicators and sent down troops to exterminate the humans. Really, really inefficient way to do things. In the original pilot (and recut theatrical movie of the pilot) Cylons are seen conveying the message that they are rounding up humans on the planet and exterminating them. The humans trying to barter for their lives is how the Cylons first discovered that a fleet of ships escaped the Genocide, led by the Galactica, but in the end are killed. And yes, the Galactica and Pegases had their own ammo production facilities on the ship. You figure a ship that huge would have a lot of storage space (not living space which requires more heat and breathable air and 'other facilities') in which to store vast quantities of materials to make stuff with). MoviePropMaster2008

I just remember shots of the Cylon raiders making strafing runs in the original. I thought it was a bit confusing because I didn't think strafing was the most effective way to commit genocide, especially on twelve colonies. I also saw the original after I saw the new one, and the new one had the cylons using nukes, which made much more sense. I never saw the theatrical cut, just whatever was on the DVD. As for ammo production, I don't think they brought that up until Season 3, so for two years, I just kept wondering, "they have run out of ammo sometime, right?" --funkychinaman 22:39, 20 July 2010 (UTC)

The only thing I can think was that Galactica's Marines did not engage in many all out firefights except on Cobol and the whole thing on New Caprica and, perhaps, the finale on the Cylon "Colony". In addition in the pilot the Galactica cleans out Ragnar station, a munitions depot leaving only the bare walls. It, possibly, could be similar to a U.S. Navy carrier cleaning out all the magazines at Norfolk. As well, on the "original" series, there is brief mention, in the two part Pegasus episode specifically, that Colonial capital ships could fire nuclear missiles so it would seem somewhat logical that Cylon ships could do so as well. Perhaps the Cylons used a combined strafing/missile attack? --Charon68 23:37, 20 July 2010 (UTC)

Well, I wasn't thinking about small arms ammo as much as ammo for the main battery and the AA guns, as well as the ammo for the Vipers' cannons, and they went through that stuff pretty almost every episode. --funkychinaman 00:24, 21 July 2010 (UTC)

It seems to imply at many points in the series that the Fleet mines asteroids and other planets and objects for raw materials to manufacture things with. In either season 2 or 3 there is a mention of the fleet starting to manufacture new Vipers. If they could refine materials to make spaceships it should have been rather easy to make ammunition of all calibers. -Anonymous

The Cylons are seen wiping entire cities out with cluster nuclear weapons (at least a dozen MIRVs per missle, a few missles per baseship), so yeah, strafing seems underpowered. Can't kill too many during a genocide, though.

Where did the "edit" button go?

Maybe it was a slug or explosive shotgun shells. They DO make those and also you can edit unless you are a registered member of this site and do research. The Striker has been used many times in TV and movies in place of a grenade launcher. The show's not saying that a real Striker can fire grenades but saying that it's a stand in for a grenade launcher Excalibur01 20:19, 3 March 2011 (UTC)

According to a prop maker that worked on the series, this is a completely fabricated, blank-firing weapon. It was created for the show, and only two were made. He mentioned this on a post on the RPF, about the new Colonial pistol that he made for Caprica, but was never used. It is now being used in the Blood and Chrome series --Krel (talk) 23:39, 9 December 2012 (EST)