Sorrel Flower (original title Fleur d'oseille) is a 1967 French comedy crime drama film directed by Georges Lautner. Before the robber Pierre died in a shootout with police, on unknown place he hid 400 millions francs of plunder. The widow Catherine, who gave birth to yet posthumous child, wants to find this money. After a short stay in a nursing home for unmarried mothers with new girlfriend Mary and their two children goes to the summer home high in the hills of Provence, because I think that anywhere else Pierre could not hide money. In their footsteps goes the gang of former accomplices of her husband. One of them go out from a gang and becomes her protector. Starring Mireille Darc and Henri Garcin.

The following weapons are seen in the movie Sorrel Flower (Fleur d'oseille):

Various characters are seen with a Colt Detective Special revolver.

Pierrot (Frédéric de Pasquale) aims his revolver at a police officer in the station hall.

The revolver picked up Marité (Anouk Ferjac) and handed it to Catherine (Mireille Darc).

She brought it back into the hands of Jo de Fréjus.

"The Biker" (Roger Mailles) (left) with his Bowning Hi-Power in a holster.

Chief of the gang, Albert Roza (André Pousse) (left) with his gun in hand.

Freddy "Philosopher" (in middle) holds his Walther PP in hand.

Freddy tries to stealthily get closer to Catherine (Mireille Darc).

"The Limping" (Marcel Gassouk) has gun fitted with a stock.

The French policemen and some thugs are armed with Gevarm Type D4 submachine guns.

A policeman fired at car with Roza's (André Pousse) men.

Freddy fired at the policemen from the car ...

... and in firefight with the defenders of the fortress.

The rifle lying between the other weapons in the trunk.

Jo de Fréjus has a sights of his sniper rifle on one of Roza's men.

Jo takes his weapon and goes into action ...

... he charging shotgun during firefight.

From the window shot at besiegers fortress.

Jo de Fréjus (Henri Garcin) cut a barrel one of shotguns and created a short weapon.

And teaches Catherine from it precisely shooting.

Catherine during the firefight replaced both weapons.

Also Marité (Anouk Ferjac) (left) is armed with a shotgun.

In defense of the fortress, however, Jo de Fréjus (Henri Garcin) uses a DF 37 hand grenade. 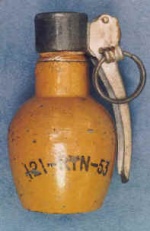 In addition to stocks of ammunition is on the table also a unknown hand grenade.

The next grenade holds in his hand Jo and is about to throw it out the window.
Retrieved from "http://www.imfdb.org/index.php?title=Sorrel_Flower_(Fleur_d%27oseille)&oldid=1387914"
Categories: