Saskatchewan is a 1954 adventure movie directed by Raoul Walsh and based on an original story by Gil Doud. The film stars Alan Ladd and Shelley Winters. The story is set in 1877 in northern Canada. North-West Mounted Police Inspector Thomas O'Rourke (Alan Ladd) and his Cree sworn brother Cajou (Jay Silverheels) encounter remains of wagon train, massacred and burned by some native tribe; Grace Markey (Shelley Winters) is a sole survivor. Incompetent Superintendent Benton (Robert Douglas) believes that attackers were Cree and orders to disarm the tribe. O'Rourke has to find the truth not only about the attack but also about the shady past of Grace with whom he falls in love.

The following weapons were used in the film Saskatchewan: 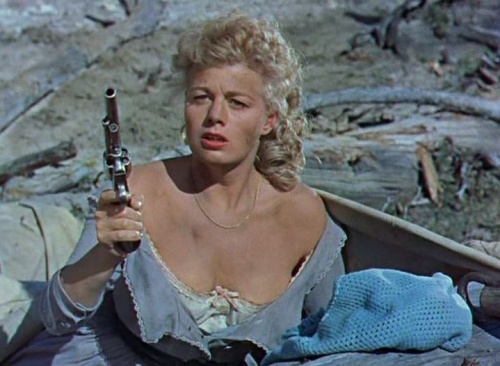 Grace Markey holds a revolver when O'Rourke finds the remains of wagon train. 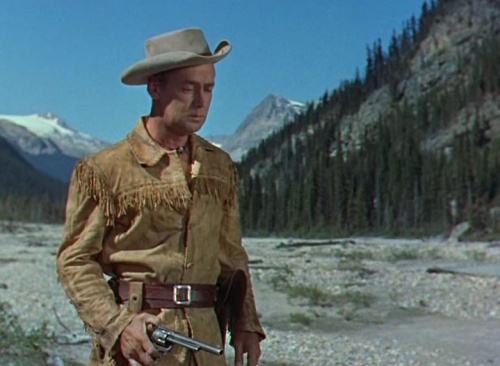 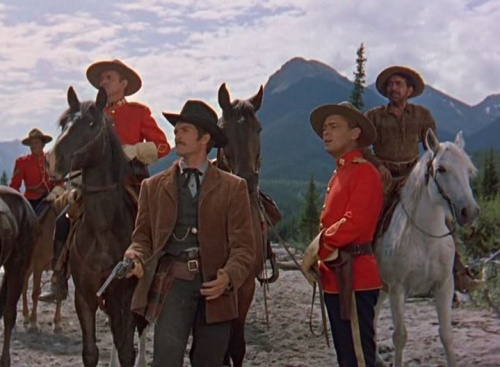 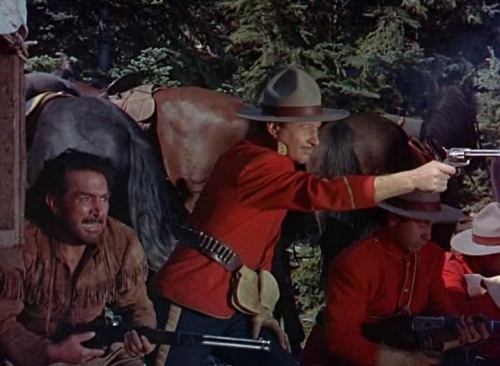 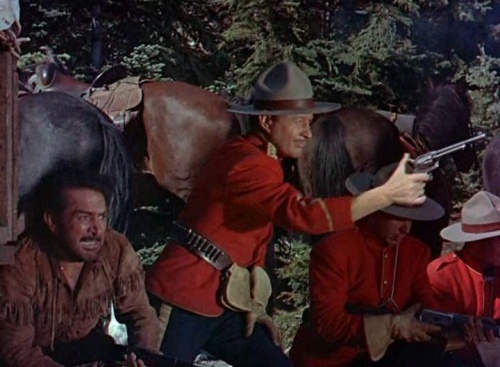 Benton fires his revolver at Sioux warriors who attack the NWMP unit that transports guns, confiscated from Cree tribe. 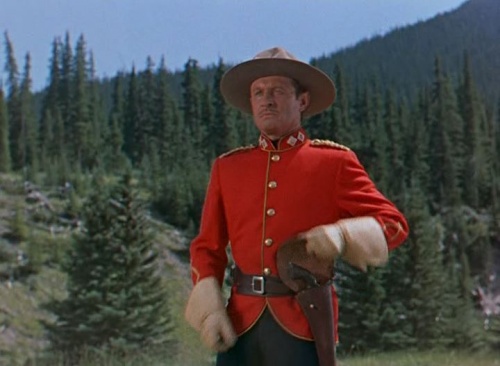 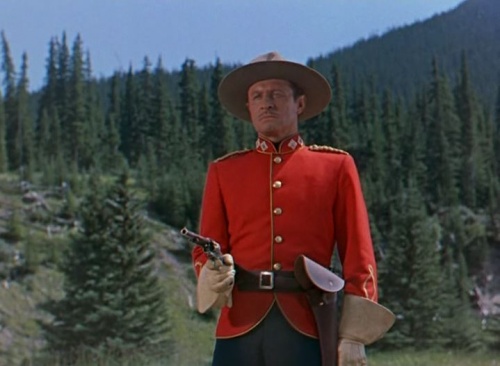 Benton draws his revolver during the conflict with O'Rourke. 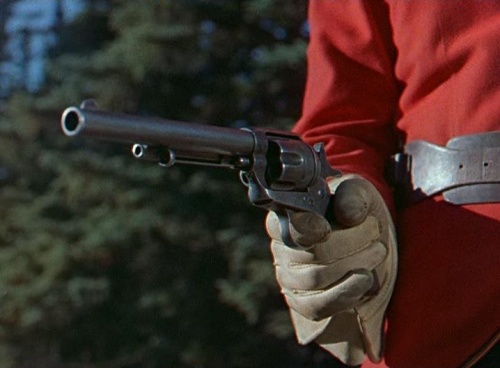 A closeup of Benton's revolver. 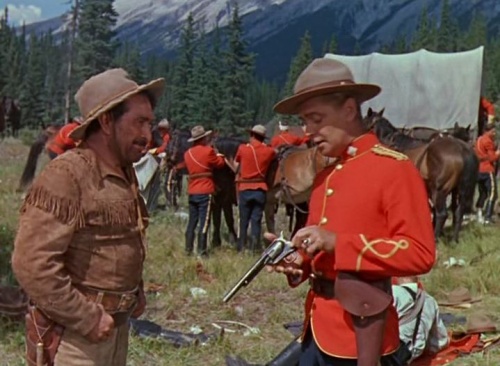 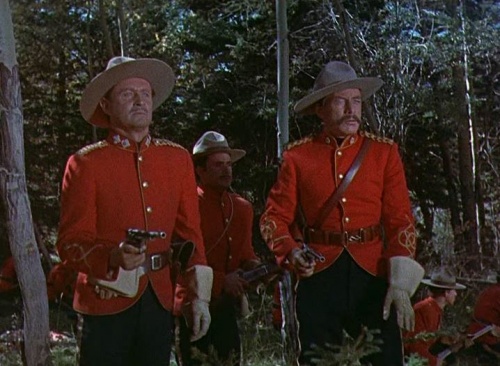 Benton and Banks with their revolver during Sioux attack. 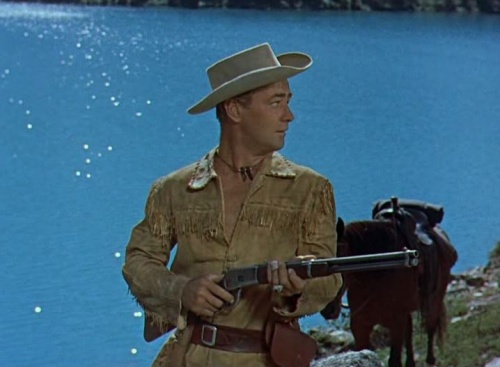 O'Rourke competes in marksmanship with Cajou. 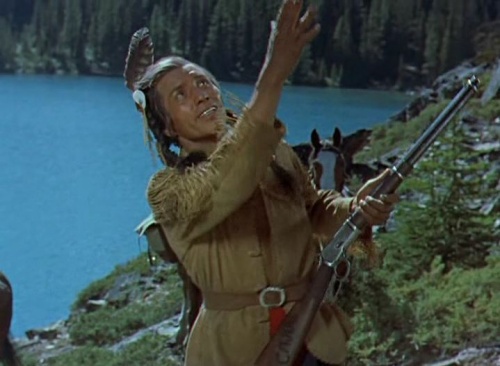 Cajou throws a tree branch in air, and O'Rourke makes a perfect shot. Lettering "Cajou" is seen on the buttstock of the carbine. 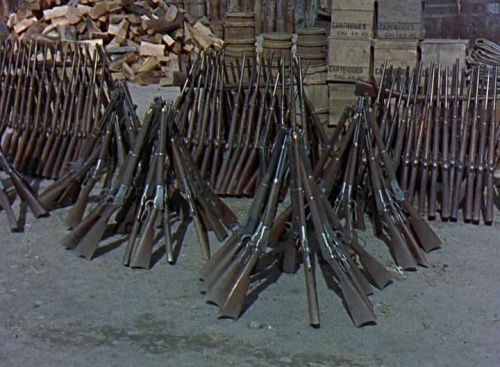 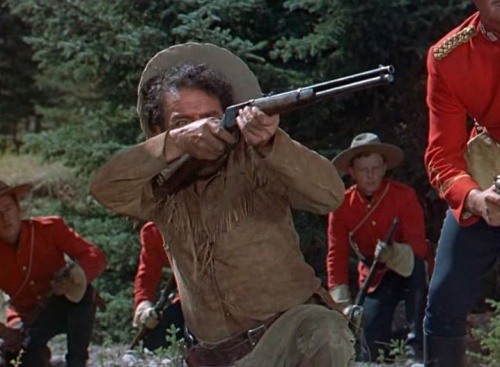 Batouche fires his carbine during the attack of Sioux. 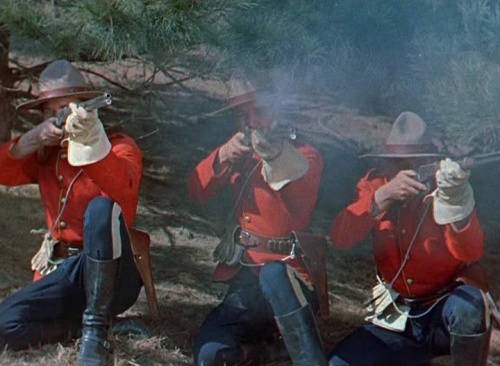 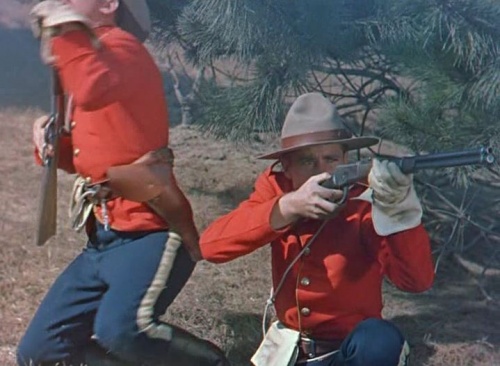 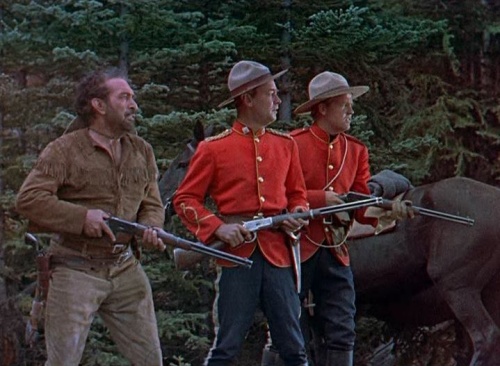 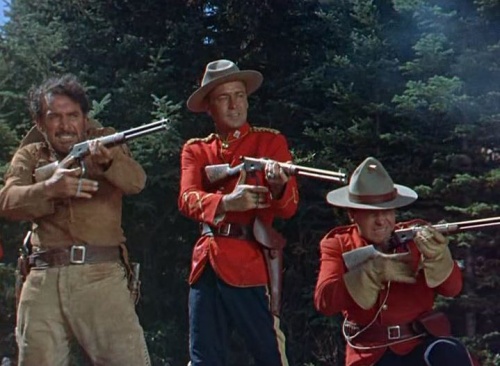 Batouche, O'Rourke and Constable Cook (John Cason) shoot to explode gunpowder in the weapon-loaded wagon that is already seized by Sioux. 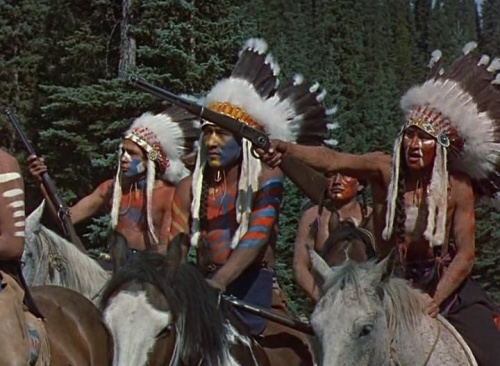 Sioux warchiefs with Winchester carbines during the attack on Banks' unit. Saddle rings are seen. 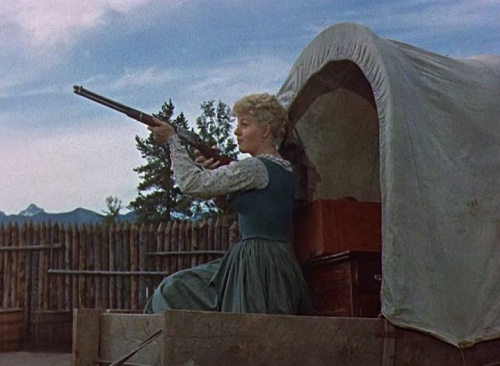 Grace Markey (Shelley Winters) shows that her marksmanship is no lesser than of O'Rourke and Cajou. 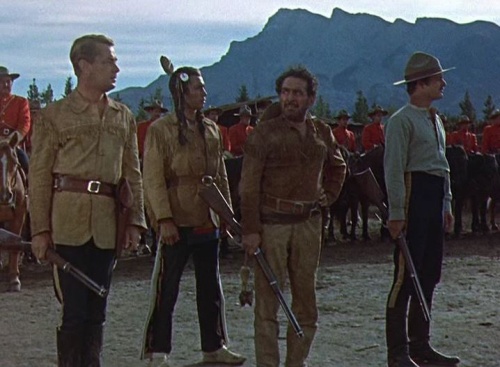 Abbot (at the right) holds a Winchester Model 1892 short rifle while O'Rourke and Bartouche are armed with carbines. 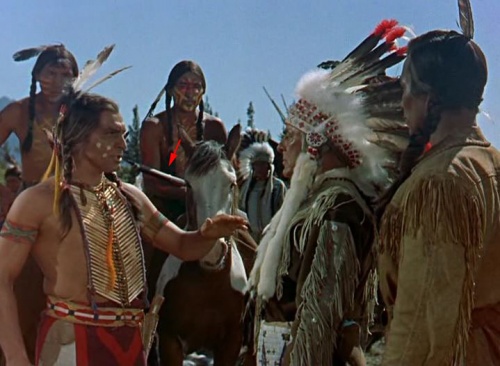 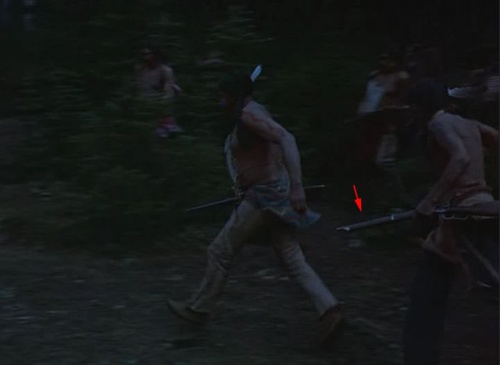 A Sioux warrior at the right holds a visually modified Winchester 1892. 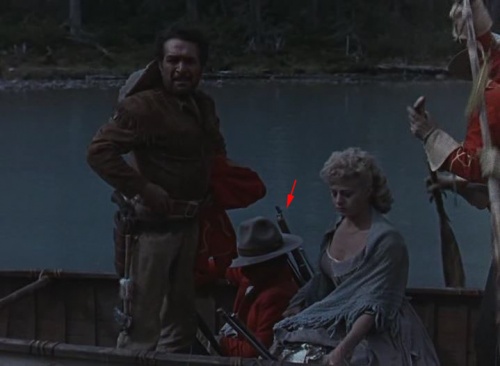 A barrel of visually modified Winchester 1892 is seen in a canoe that transports weapons, confiscated from Cree. 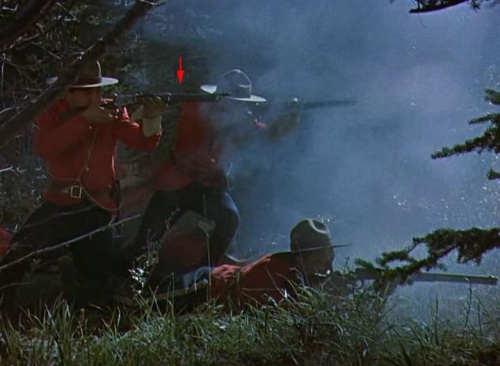 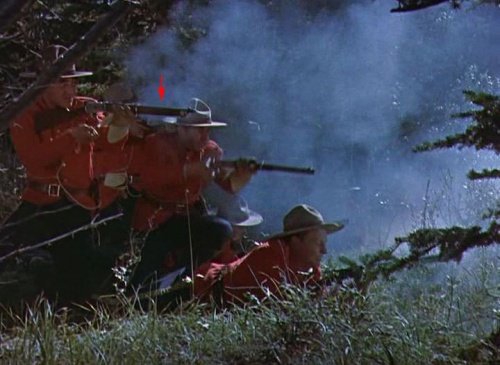 One of the constables of Banks' unit (at the left) fires a visually modified Winchester 1892. 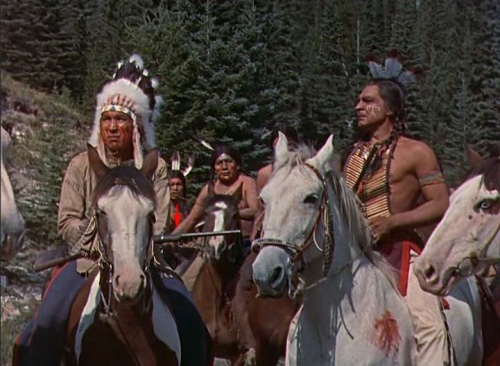 A Sioux warchief with a Trapdoor carbine. 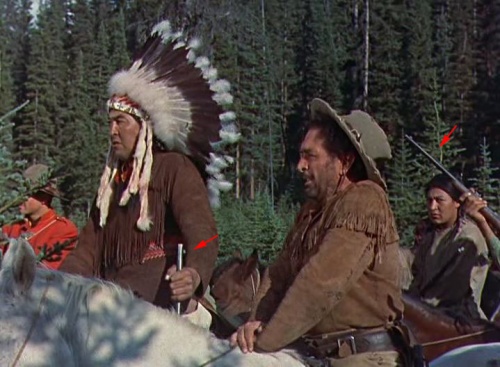 A Cree chief (in center) and one of Cree warriors (at the right) hold Trapdoor carbines. 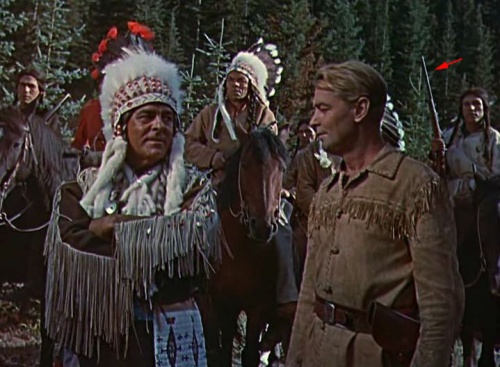 A Cree warrior (at the right) holds a Trapdoor carbine.
Retrieved from "http://www.imfdb.org/index.php?title=Saskatchewan&oldid=1329617"
Categories: