Safe House is a 2012 action thriller directed by Daniel Espinosa (Snabba Cash) and stars Ryan Reynolds as Matt Weston, a low-level CIA agent in charge of a CIA safe house in Cape Town, South Africa who receives a very dangerous "house guest" by the name of Tobin Frost (Denzel Washington), who happens to be a high level agency operative. When the safe house is breached, Weston finds himself on the run with Frost from both government agencies and criminal elements. The cast included Robert Patrick, Brendan Gleeson, Vera Farmiga, and Ruben Blades as well as Snabba Cash stars Joel Kinnaman and Fares Fares.

The following weapons were used in the film Safe House (2012):

Matt chambers his SIG Pro before Kiefer's team arrives at the safe house.

Matt commandeers a BMW at gunpoint.

Matt holds his SIG on Tobin as they have a short-lived mexican stand-off.

Matt fires his sidearm at the shantytown. His SIG has suffered a stovepipe malfunction, meaning that a spent shell casing has jammed vertically in the ejection port.

Matt wields his SIG Pro at another safe house.

Vargas attaches a suppressor on his P226.

Matt holds a P226 after firing it.

Tobin fires a P226 after taking it from one of Vargas' men.

Vargas searches for Frost, his P226 in hand.

South African Police Service (SAPS) officers use Vektor Z88 handguns as their sidearms in the film, most notably seen during the shootout at Green Point Stadium. Tobin Frost (Denzel Washington) takes one from a dead officer, and uses it for a majority of the film. 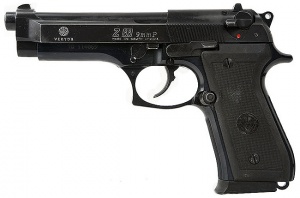 A police officer fires his Vektor in the air at the stadium.

Tobin holds his Vektor on Matt as they have a short-lived mexican stand-off.

Frost fires the Vektor next to Weston's head. It is likely the weapon used for this scene was prop, with muzzle-flash added in post-production, since discharging a weapon this close to one's ear is likely to cause permanent damage to your ear drum and/or loss of hearing.

Tobin reaches for his Vektor Z88.

Daniel Kiefer (Robert Patrick) and his CIA team members, including Agent Miller (Jake McLaughlin), use a Glock 17 pistols as his sidearms in the film. David Barlow (Brendan Gleeson) also uses a Glock 17 in the film.

A Glock 17 is seen holstered on the belt of a CIA operative.

Agent Miller holds his Glock 17 during the shootout at the safe house.

David Barlow holds his Glock as he searches for Tobin Frost.

An hitman uses a Tokarev TT-33 in the film.

The hitman holds his Tokarev before kicking in a bathroom door.

The hitman holds his Tokarev.

Tobin Frost (Denzel Washington) uses a Steyr M9A1 as his sidearm in Cape Town, but dumps it before entering an American embassy. 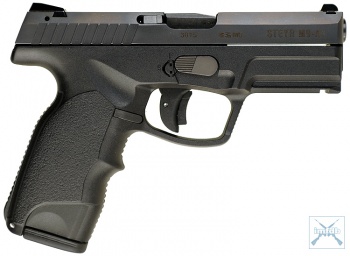 Frost chambers his Steyr. This particular scene was cut from the final film, and is only seen in the trailer.

Tobin fires his Steyr to create a diversion for his pursuers.

Tobin Frost (Denzel Washington) uses a Heckler & Koch USP Compact near the climax of the film at the second safe house.

Frost walks with his USP Compact. NOTE: This scene appeared only in the trailer of the film.

A hitman holds his UMP-9 at the safe house.

A hitman aims his UMP-9 at the shantytown.

"He's on the roof!"
One of Vargas' hitmen opens fire as he spots Tobin at the shantytown.

A dead hitman grips his UMP-9 at the second safe house.

A couple of Vargas' hitmen use IMI Uzis in the film.

One of Vargas' men fires his Uzi at Weston's car.

A hitman goes down holding his Uzi.

Several of Vargas' hitmen are use Heckler & Koch MP5K-PDW submachine guns in the film.

A hitman holds his MP5K-PDW (on the right) during the attack on the safe house.

A hitman cleans his MP5K-PDW.

Another MP5K-PDW is visible on a table (upper left) as a couple of hitmen clean their weapons.

A hitman holds his MP5K-PDW at the shantytown.

One of Vargas' hitmen uses a Heckler & Koch MP5A3s during the attack on the safe house.

The hitman wields his MP5A3 at the safe house.

Vargas (Fares Fares) uses an Olympic Arms K23B as his primary firearm in the film. The rifle is initially equipped with a telescopic sight and suppressor, but is mostly seen with an EOTech holosight.

Vargas fires his carbine at Matt Weston at the shantytown.

Kiefer fires his M4A1. Notice how his M4A1 has been fitted with an XM177-style flash-hider.

Carlos Villar (Rubén Blades), a forger and a friend of Frost's, uses a Vektor R5 carbine to defend his home from Vargas and his men.

Carlos fires his Vektor R5 as he gets hit.

Several of Vargas' hitmen use Heckler & Koch G36C rifles in the film.

A hitman fires his G36C at the safe house.

A G36C is seen on a table (lower left) as a couple of hitmen clean their weapons.

A hitman uses an AK-47 during the gunfight at the shantytown.

The hitman fires his AK-47.

The hitman fires his AK-47.

Several hitmen use Norinco Type 56 assault rifles in the film, most notably during the safe house attack.

A hitman holds his Type 56 at the safe house (on the left).

A hitman exits an elevator, his Type 56 at the ready.

A Type 56 rifle is seen on a table as a couple of hitmen clean their weapons.

Several hitmen use Norinco Type 56-1 (under-folding stock variant) assault rifles in the film, most notably during the safe house attack.

A hitman goes down firing his Type 56-1. Notice the distinctive full-hooded front sight.

A hitman visually checks the barrel of his Type 56-1 as he cleans his weapon.

One of Vargas' hitmen uses a SIG SG 551 rifle during the attack on the safe house.

A South African Police Service (SAPS) officer uses what appears to be a Mossberg 590 shotgun at the stadium.

The police officer holds his Mossberg 590.

The police officer lowers his shotgun.

Keller (Joel Kinnaman), the keeper of the second safehouse, uses what appears to be a Remington 870 shotgun in the film. Matt Weston (Ryan Reynolds) takes the shotgun from him as he surprises him, and is never seen again.

Keller reaches for the shotgun.

Only the stock of the shotgun is visible as Matt holds it behind Keller.

A hitman who breaches the door of the safe house fires a M249 SAW Paratrooper before being cut down by one of the CIA agents.

A flashbang is visible on the floor.
Retrieved from "http://www.imfdb.org/index.php?title=Safe_House_(2012)&oldid=1197435"
Categories: