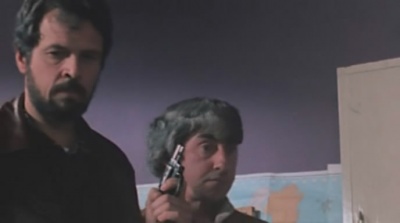 Randy Jurgensen (at the left) holds a Smith & Wesson Model 10 as a police officer in Maniac.

Randy Jurgensen is an ex police officer who is also known as a cult character actor because of his numerous cameos in films such as The Godfather, The French Connection, Maniac etc. including semi-autobiographical for him rare serial killer film with Al Pacino - Cruising, where Pacino played the role, that was based on Jurgensen's real life experience of undercover work in homosexual subculture known as "leather boys" to find a serial killer, who turned out to be Paul Bateson, who was cast in The Exorcist as a radiologist assistant (his real job at the time of filming). Though Pacino in Cruising depicted as a normal man pretending to be homosexual to find killer, Jurgensen was ex-homosexual at the time of his undercover work.