The Parabellum MG14/ 17 machine gun and variants can be seen in the following films, television series, video games, and anime used by the following actors: 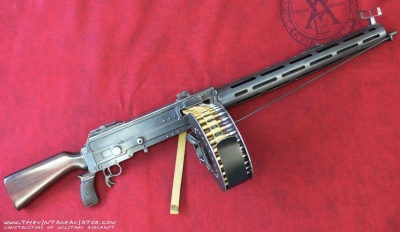 The Parabellum MG14 saw service in World War 1 and were primarily mounted on German aircraft such as a Zeppelin. Basis of the construction was the MG 08, which was revised to reduce weight. In particular, the weapon could do without water cooling, a perforated barrel jacket was attached instead. The ammunition taken from a drum, which was attached to the right side. This cartridge belts were wound up to 250 rounds.

The MG 14 was used primarily in two-seater planes. Here the observer operated the movably mounted weapon and secured the rear, while the pilot fired forward with a fixed MG 08/15. Specimens that were installed in airships were fitted for safety reasons with water cooling.

Initially rarely issued to the infantry, the gun appeared towards the end of the war in larger numbers on the battlefields; for this purpose a bipod could be retrofitted.

In 1917 the model was revised and performed as the MG 14/17. For better handling, the diameter of the voluminous running casing has been reduced and the controls have been redesigned so that they can also be operated with gloves. In addition, the MG received a mounting rail for scopes.