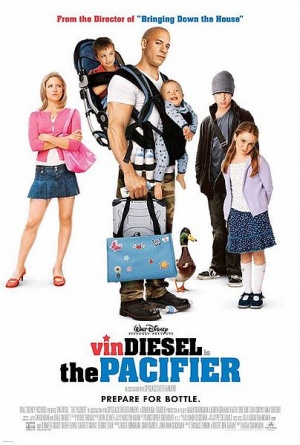 The following weapons were used in the film The Pacifier:

Captain Bill Fawcett (Chris Potter) carries a two-tone Heckler & Koch USP, presumably a USP-45 based on the muzzle diameter during a confrontation with Shane Wolf (Vin Diesel) and Julie Plummer (Faith Ford). In one sequence, the gun's hammer is cocked, but in the next shot, the hammer is not. 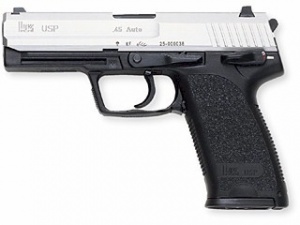 Fawcett with his USP-45.

Fawcett (Chris Potter) holds his USP-45 during a confrontation.

LT Shane Wolf (Vin Diesel) has the pistol pointed at him.

Mrs. Chun (Mung-Ling Tsui) holds a SIG-Sauer P226 during a confrontation. The pistol also is seen in the hand of Lieutenant Shane Wolf (Vin Diesel).

The SIG on the right. A Desert Eagle Mark XIX is seen in the foreground.

Mr. Chun (Dennis Akayama) uses a chrome Desert Eagle Mark XIX in .50 Action Express as his sidearm at the end of the film.

Chrome Desert Eagle on the seen in the bottom foreground.

Mr. Chun with his Desert Eagle tucked in the holster as Seth Plummer (Max Thieriot) delivers a kick.

Mr. Chun aims his Desert Eagle at the kids during the car chase.

The kids drive Mr. Chun off the road by throwing used diapers at him (wouldn't be a kid's movie without some toilet humor).

The Montgomery County (Maryland) police officers responding at the house all carry Glock 17 pistols. Some of these pistols appear to have a more shiny finish, suggesting they are props. The officers are wearing blue uniforms, however, when the movie was made, the MCPD wore khaki uniforms. They have since switched to black uniforms, in 2008.

MCPD police officers draw their Glock 17s on Wolf and the Plummers.

The MCPD officers give up their pistols when ordered to by Mr. Chung.

During a school production of The Sound of Music, several students portraying Nazis hold the Luger P08.

During a school production of The Sound of Music, several students portraying Nazis hold the Luger P08.

IMI Uzi submachine guns are used by a majority of the thugs on the boat at the beginning of the film.

A thug on the boat armed with an IMI Uzi.

One of the thugs circling the boat on a jetski readies a Heckler & Koch MP5K when the Navy SEALs begin their assault.

A thug readies his MP5K.

One of the thugs on the boat is briefly seen armed with a Franchi SPAS-12 shotgun.

In the lower right, a thug is seen on the boat armed with a SPAS-12.

One of the thugs circling the boat on a patrol helicopter is seen armed with a Steyr AUG A1 fitted with a brass catcher over the ejection port.

A thug aims his Steyr AUG A1 that is fitted with a brass catcher.

Mr. Chun (Dennis Akayama) uses a M4A1 Carbine to hold the police and the family at gun point.

Mr. Chun (Dennis Akayama) with his suppressed M4A1. The weapon has a Gemtech suppressor, an M68 Aimpoint sight, an AN-PEQ2 IR designator and a flashlight on a side rail and a laser on the opposite rail. Contrary to common knowledge, red dot sights can be used with the front caps on, using both eyes open as an 'instinctive' point and shoot sight.

Mr. Chun forces the police to drop their guns. Note that the rear cap on the red dot sight is also down.

Underslung on Mr. Chun's M4A1 is an M203 grenade launcher, which seem to have unfamiliar parts seen inside the muzzle (possibly devices created by the pyrotechnical special effects crew).

Mr. Chun points his M4A1 fitted with an M203 launcher. Note the out of place parts seen inside the muzzle.

A better sideshot of the M203 launcher.

During the SEAL mission at the film's beginning, Wolf is seen using a spear gun-type weapon to fire a type of RPG at the boat and then at the enemy helicopter.

Wolf prepares to use the weapon while underwater.

Wolf aims the weapon at the enemy helicopter.
Retrieved from "http://www.imfdb.org/index.php?title=Pacifier,_The&oldid=1291859"
Categories: