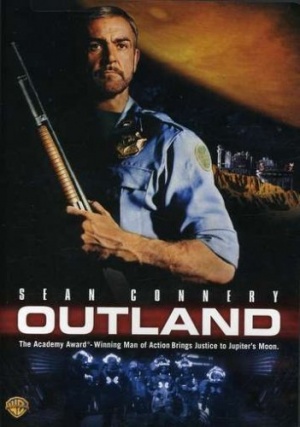 Outland (1981) The shotgun held by Sean Connery in the poster appears to be a Winchester Model 1912, but is not the weapon he uses in the film.

Outland is a 1981 science fiction thriller starring Sean Connery as the new federal marshal overseeing a mining colony on a moon of Jupiter. The film was directed by Peter Hyams and contains similar themes with the classic western High Noon.

The following weapons were used in the film Outland:

The main weapon seen in this movie is a sawed off Browning 2000 shotgun. Federal Marshal William O'Niel (Sean Connery), Sheppard (Peter Boyle), as well as other marshals are seen using the shotgun, but it appears that there was only one practical shotgun used in the film. The two hitmen hired to kill O'Niel use them as well, with infrared scopes attached. In the scenes where multiple guns are present it's likely the others are props. O'Niel's shotgun is tapped for the giant scope mount that the hitmen use. You can see the small screw hole just forward of the loading port. This supports the "one gun" theory.

Browning B2000 shotgun with short barrel and sawed-off stock

O'Niel's Browning 2000 on the floor after getting it kicked away from him in a brawl.

O'Niel firing off a shot to show he means business.

O'Niel loads shells into his Browning 2000 in preparation for the hitmen. Note that this small loading port is on the other side of the shotgun than the ejection port.

O'Niel pulls back the action ...

... and let's it go, locked and loaded. This is the standard side for the ejector port (for right handed shooters).

A side shot of the Browning 2000, you can tell it's a 2000 and not a Double Automatic by the shape of the upper receiver and stock.

O'Niel returns fire on a hitman with his Browning 2000.

The shotguns used by the hitmen who come aboard the mining facility are also custom Browning 2000 shotguns fitted with custom scopes.

Another shot of the weapons being assembled.

One of the hitmen (P.H. Moriarty) walking down a corridor, his Browning 2000 at the ready.

Creeping through the shadows as they stalk O'Neil.

A hitman (Doug Robinson) taking aim with the shotgun.
Retrieved from "http://www.imfdb.org/index.php?title=Outland&oldid=1045848"
Categories: