Our Girl is a 2013 dramatic television film originally broadcast by the BBC. It follows Molly Dawes (Lacey Turner), an 18 year old British girl, through her decision to join the British Army and her training as a Combat Medical Technician. It was succeeded by a 2014 TV series which covers her deployment to Helmand province in Afghanistan.

The following weapons were used in the film Our Girl (2013):

The L85A2 is the most common weapon featured in the film, being the standard issue rifle of the British armed forces. Despite appearing to be set in the current day (as indicated by the used of Multi Terrain Pattern (MTP) camouflage and the Mk IV Osprey body armour) all of the rifles are fitted with the standard polymer handguards and SUSAT or iron sights, as opposed to the contemporary configuration which is normally fitted with a railed Daniel Defence handguard and ACOG sight. 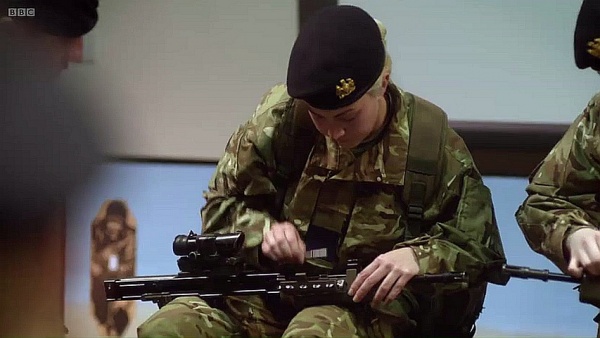 Molly Dawes (Lacey Turner) replacing the gas system on her L85A2. The order in which the L85 is stripped and assembled is incorrect in this film with the gas parts being the last part to be removed, and the first to be assembled. In real life the taught method is the remove the gas parts first and replace them last, as in an emergency if the gas parts are absent the rifle can still be operated as a straight pull bolt action. 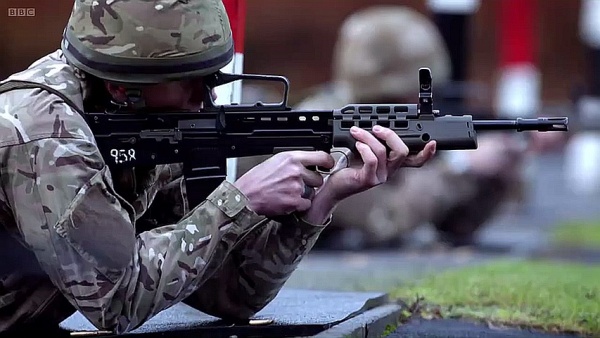 Although most of the L85A2 that appear are fitted with SUSAT sights, several appear fitted with basic iron sights. The rifle is also fitted with the A2 type handguard which despite the name was not fitted to all L85A2 rifles, with the majority retaining the original A1 style handguard unless it was damaged at the time of upgrade. 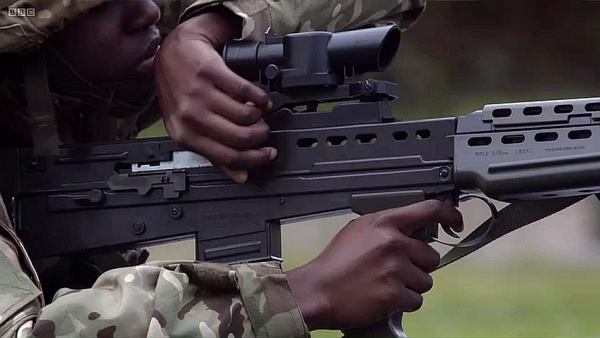 A soldier demonstrating the over arm cocking action mandated by the design of the L85A2. Note that not only does this soldier unsafely have his finger on the trigger whilst cocking the action, the cross bolt safety above the trigger is also in the "fire" position. 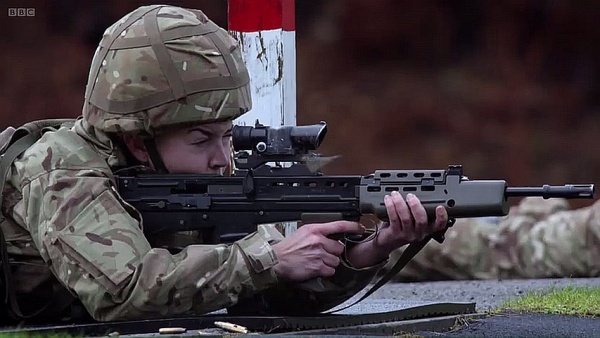 Molly live firing her L85A2 on the range. 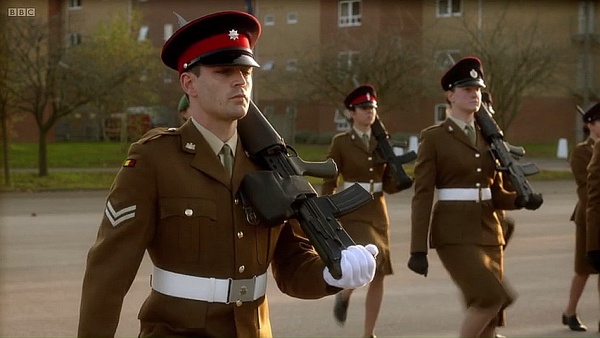 Cpl. Geddings (Matthew McNulty) with an L85A2 during the passing out parade. Note that the handguard and SUSAT are fitted with back covers which are fitted for ceremonial occasions. 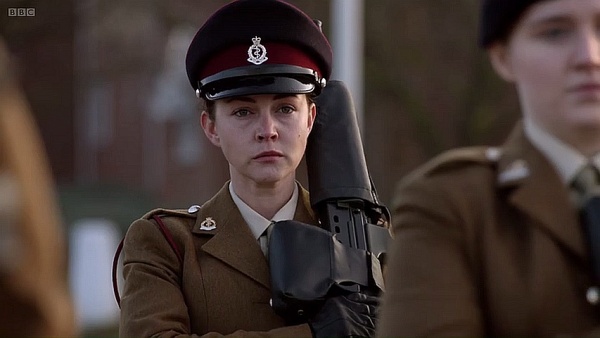 Molly part way through a "present arms" drill with her L85A2. Note that her rifle is lacking a bayonet, unlike all of the other L85A1s and A2s in this scene which are fitted with them. 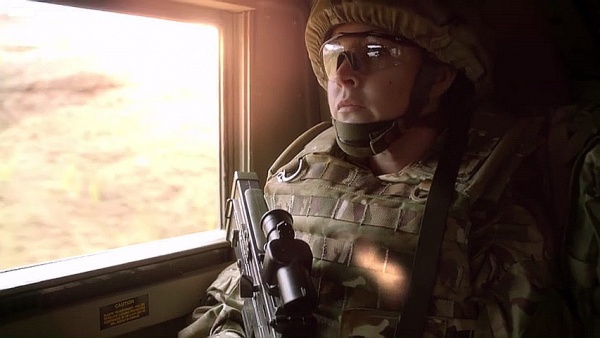 Molly with her L85A2 whilst riding in a Humvee. Note that in this shot as seam is clearly visible on the top of the rear of the receiver indicating that it is a replica of some sort, as on the real weapon this part is a solid piece of stamped steel. 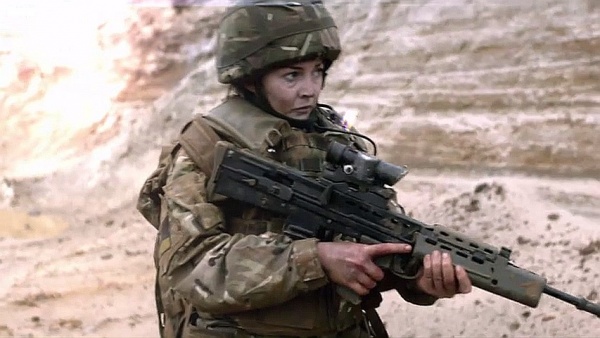 Molly patrolling with her L85A2 in Helmand during the epilogue of the film. Note the use of the Mk IV Osprey vest in MTP camouflage which suggest that the L85A2 being used should be the upgrade Theatre Entry Standard (TES) fitted with railed handgaurd, ACOG sight and improved flash hider. This vest also leads to a continuity error as in the next scene... 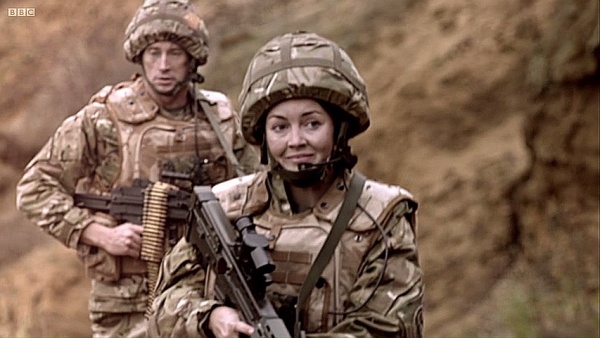 ...it has been replaced by the earlier Mk II Osprey in Desert DPM pattern camouflage.

During parade scenes the majority of the rifles seen are actually the earlier L85A1 variant, all fitted with iron sights. 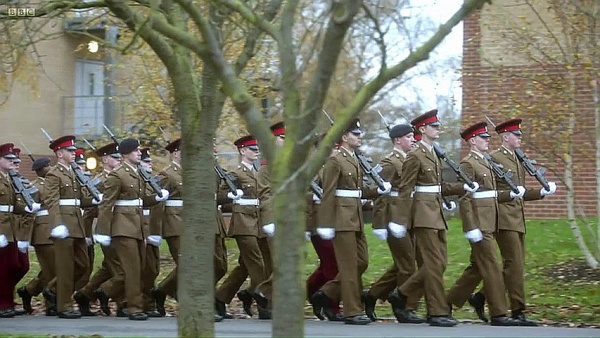 A group of soldiers marching past with L85A1s when the recruits arrive at Pirbright. 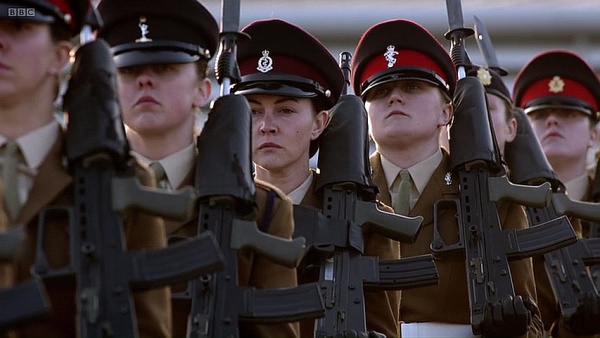 With the exception of Molly Dawes (Lacey Turner) in the center, all of the soldiers in this shot are carrying L85A1s fitted with iron sights, bayonets and ceremonial handguard covers. Also, note that whilst the bolt of the l85A2 has a realistic metal color to it, the bolts on the L85A1s are incorrectly jet black suggesting that they are replicas of some sort.

Lee-Enfield No.1 Mk.III*s appear during stock footage of WWI shown during a presentation on the realities of war. 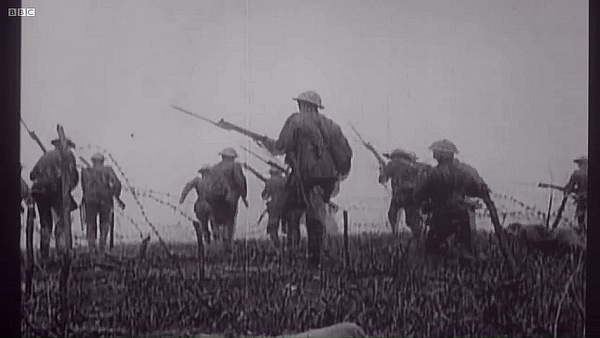 Lee-Enfield Np.1 Mk.III*s can be seen at various point of the stock footage, normally fitted with bayonets.

L86A2 Light Support Weapons (LSWs) appear in several scenes. Although their usage during training in England is not unusual, they are rarely if ever currently carried in Afghanistan as depicted during the epilogue. 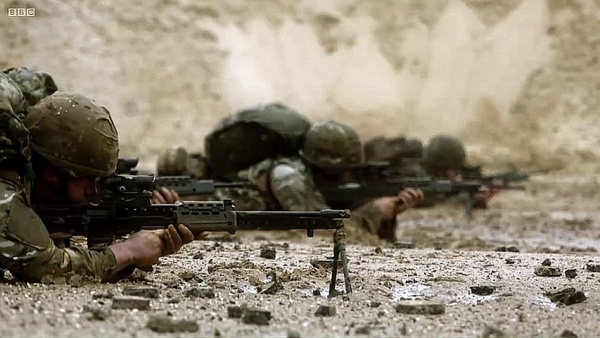 A soldier firing his L86A2 during a casualty treatment exercise. The rifles are not fitted with Blank Firing Adapters (BFAs) suggesting that this may be intended to be a life fire exercise. However it is unlikely that the exercise as depicted would be live fire and it is not depicted as if it is, so more likely it is that due to the fact that these are theatrically blank adapted weapons BFAs are technically unnecessary so were not fitted despite the fact that their use would be correct. 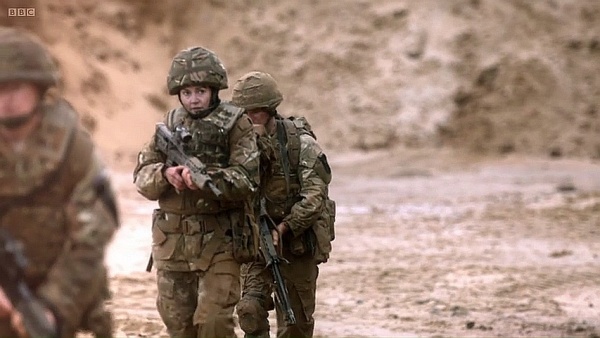 A soldier can briefly be seen with an L86A2 in Afghanistan.

An L7 GPMG can be seen in the background of the casualty treatment exercise. 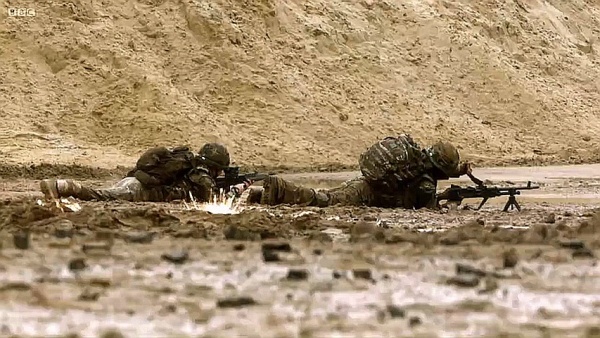 The soldier on the right is reloading his GPMG. Note the sparks in the foreground which are the early stages of a theatrical explosive charge. 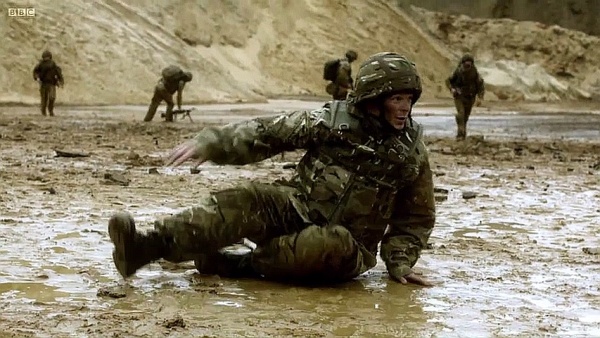 The same soldier can be seen in the background (second from the left) picking up his GPMG after the exercise is over.

An FN Minimi can be seen being used by a soldier in Afghanistan during the film's epilogue. Although the variant of Minimi depicted was adopted by the British Army as the L108A1, it is far more likely that a Para variant (either the original L110A1 or railed L110A2) would be used. 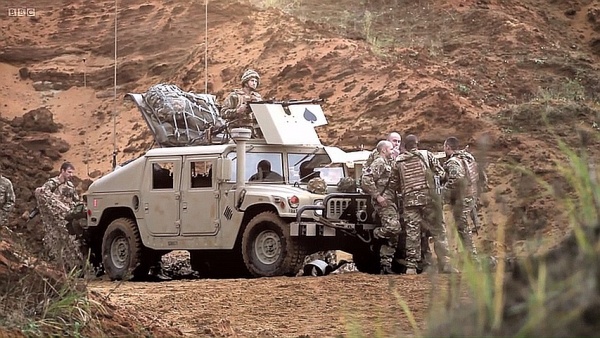 A Minimi is visible on the roof of the Humvee resting on its bipod. 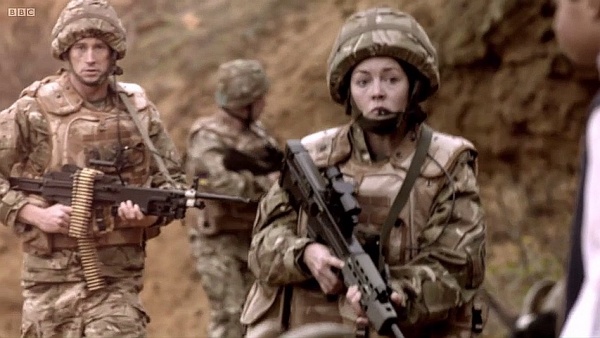 The soldier of the left of the frame is carrying a Minimi with the ammunition belt wrapped around the receiver (in real life a box or pouch would always be fitted for patrol use such as this).

A Browning M2HB fitted with a flash hider can be seen on the roof of a Humvee during a training exercise and in Afghanistan. This vehicle choice is somewhat baffling as all of the soldiers depicted in these scenes are British, and the film was shot entirely in Enlgand. The gun shield of the Humvee is marked with a "Spade" insignia which is used by the 506th Infantry Regiment, possibly indicating that this vehicle is left over from another production. 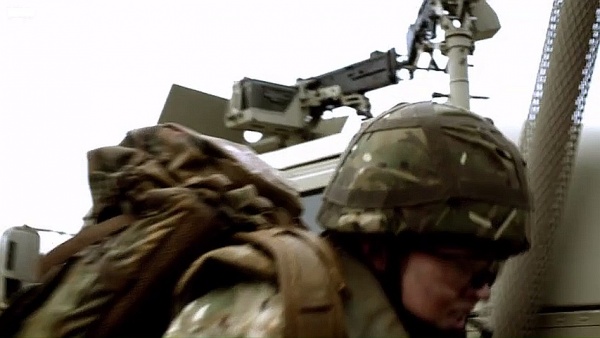 The M2HB can briefly be seen during the casualty treatment exercise in England. 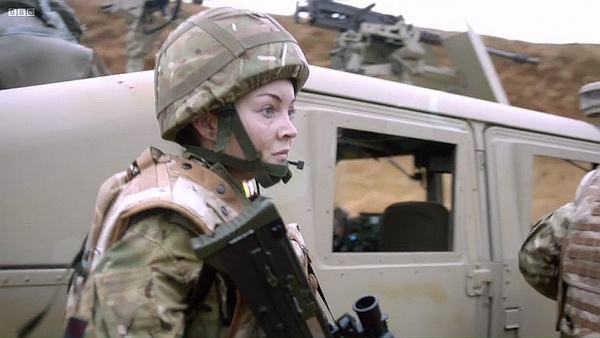 Molly Dawes disembarking from a Humvee in Afghanistan showing the machine guns mounted on the roof. 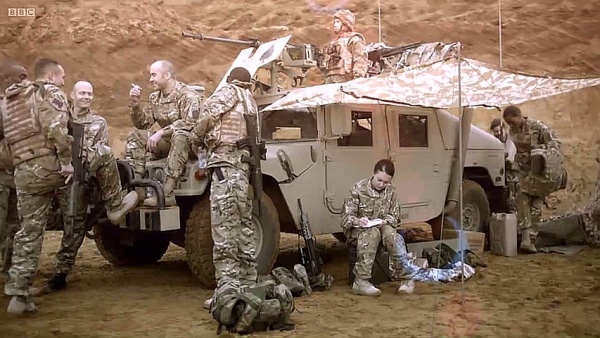 Note the "Spade" on the gun shield. Also, note that there are no American soldiers who this errant Humvee might belong to, and the camouflage sheet fitted to it is British Desert DPM pattern.

An M60 can be seen on a post mount on the roof of a Humvee during a training exercise and in Afghanistan. 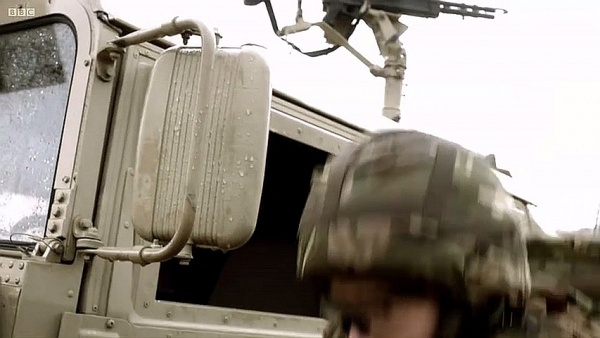 The distinctive barrel, gas tube and flash hider of the M60 can briefly be seen during a training exercise. 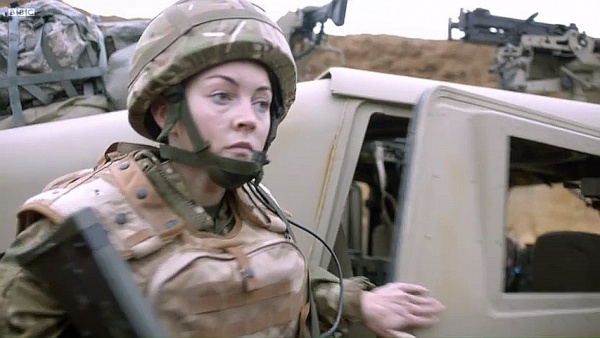 Most likely the same Humvee appears in Afghanistan with the M60 fitted.

A Royal Ordnance QF 25 Pounder can be seen at Army Training Centre, Pirbright. 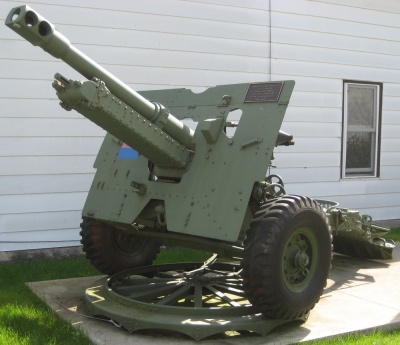 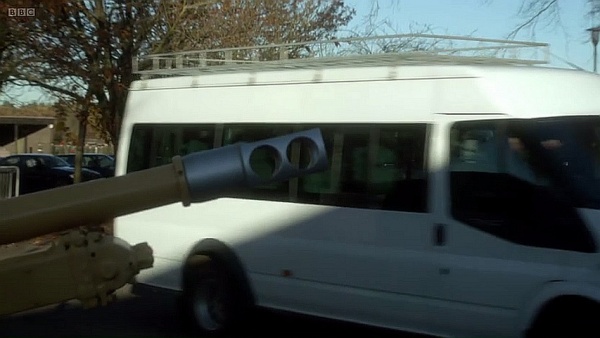 Only the front of the weapon is seen, but it can be identified as a QF 25 pounder by its muzzle brake and the shape of the recoil system.

An L5 Pack Howitzer, the British model of the OTO Melara Mod 56 howitzer, can be seen at Army Training Centre, Pirbright. 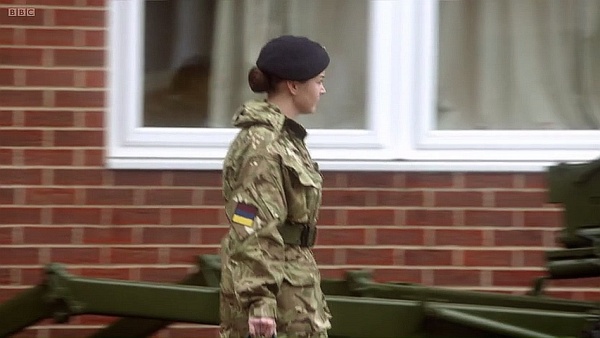 The folding carriage of the L5 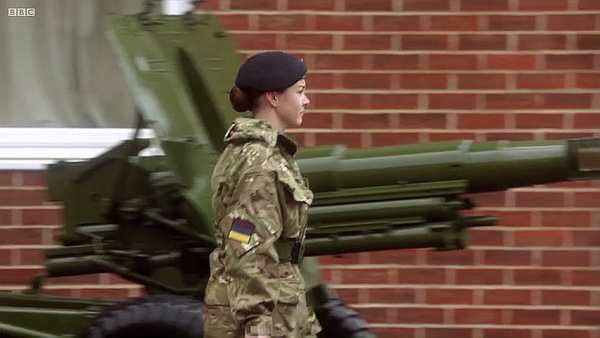 The main body of the L5. 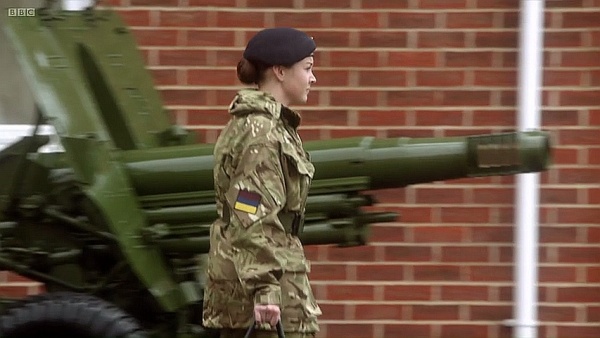 The distincive muzzle brake and short, stepped barrel of the L5.

Several Model 24 Stielhandgranates appear during stock footage of WWI shown during a presentation on the realities of war. 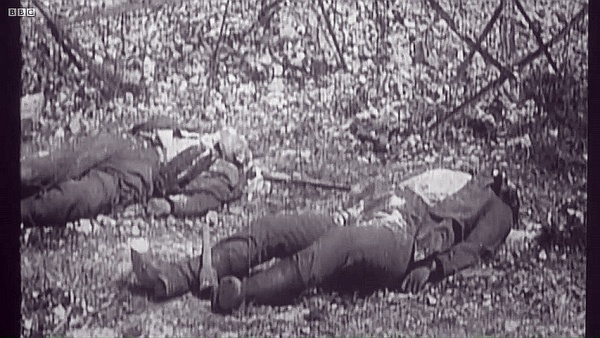 A Model 24 can be seen resting on the leg of the body in the foreground.
Retrieved from "http://www.imfdb.org/index.php?title=Our_Girl_(2013)&oldid=855652"
Categories: