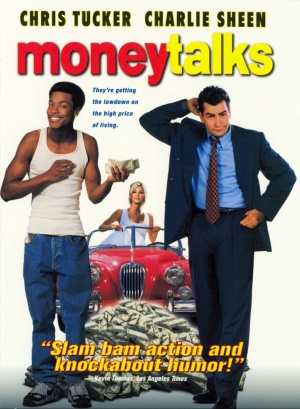 Money Talks is the 1997 comedy that was the feature film directorial debut of Brett Ratner. Chris Tucker stars as a small time hustler in Los Angeles who reluctantly collaborates with an investigative reporter (Charlie Sheen) after a notorious criminal seeks revenge. The film also was the first of Ratner's four collaborations with Tucker (who would go on to be one of the stars of the Rush Hour trilogy).

The following weapons were used in the film Money Talks:

Villard (Gerard Ismael) is seen using a SIG-Sauer P226 pistol at the Coliseum.

A two-tone SIG-Sauer P228 fitted with a Wilcox Industries UITC IR/laser sight is wielded by Franklin Hatchett (Chris Tucker). This is the same pistol first seen in 1995's Virtuosity and later seen in several other films including Ghosts of Mars and Barb Wire. 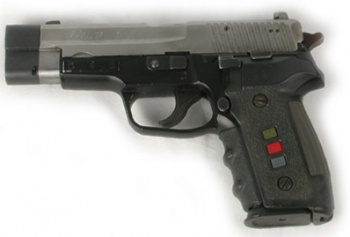 A two-tone SIG-Sauer P228 (9x19mm) with Wilcox Industries UITC laser, as used in the 1995 film Virtuosity. The weapon pictured here is the actual screen-used gun from the movie. (This photo comes from Long Mountain Outfitters)

A two-tone SIG-Sauer P228 fitted with a Wilcox Industries UITC IR/laser sight is wielded by Franklin Hatchett (Chris Tucker). This is the same pistol first seen in 1995's Virtuosity.

The Smith & Wesson Model 10 is used by LAPD officers to fire on Franklin.

Officers use their revolvers.

A Smith & Wesson 3913 is the pistol carried by Detective Williams (Daniel Roebuck).

A Smith & Wesson 3913 is used by Detective Williams (Daniel Roebuck).

A Glock 19 is seen being taken by James Russell (Charlie Sheen) after he knocks out a pilot.

A Glock 19 is seen held by James Russell (Charlie Sheen).

Aaron (Michael Wright) is seen going to a hidden cache of weapons and taking up what appears to be a two-tone Heckler & Koch SP89 made to look like an MP5K by adding the MP5K foregrip as well as "A2" style stock. This appears to be the same firearm wielded by Dennis Hopper in the film Speed. It can be noted as an SP89 instead of an MP5K due to the lack of a paddle magazine release behind the magazine and lack of a push-pin lower receiver. The weapon is seen in the hands of Franklin as well. A different SP89 mockup is also used.

Franklin (Chris Tucker) holds the modified Heckler & Koch SP89 which appears to be the same weapon wielded in the film Speed.

A Micro Uzi fitted with a laser sight is another weapon wielded by Aaron in his hidden arms display.

A Micro Uzi fitted with a laser sight and suppressor is another weapon wielded by Aaron.

Suppressed MAC-10's are also used during the prison bus ambush and the shootout at the Coliseum.

Suppressed MAC-10's are also used during the prison bus ambush.

During the prison bus ambush, several of the operatives are armed with the SLR.

An operative has the rifle slung.

What appears to be a Norinco Type 56-1 fitted with an M203 grenade launcher is used.

Seen on the left.

An AT4 launcher is first seen in Aaron's hidden armory. Aaron is later seen using the launcher at the Coliseum. He is seen firing the weapon several times and a bag of extra missiles are seen nearby, suggesting the launcher can be reloaded. In reality, the AT4 is actually a single use system.

Aaron holds the launcher at the right. Note the bag of extra missiles are seen nearby, suggesting the launcher can be reloaded.

The launcher is used by Aaron.

Aaron (Michael Wright) is seen revealing a hidden room full of weapons to James and Franklin.

The weapons arsenal is revealed.

The firearms for this scene were provided by Ellis Props and Graphics. The Ruger AC556 and Snake Plissken's "Coreburner" without the prosthetic cover were both weapons previously seen in the film Escape from L.A..
Retrieved from "http://www.imfdb.org/index.php?title=Money_Talks&oldid=1327443"
Categories: