Mission: Impossible II is the second installment in the Mission: Impossible film franchise. The 2000 action sequel was directed by John Woo (Face/Off) and once again stars Tom Cruise as IMF agent Ethan Hunt, who this time travels to Australia to locate a deadly bioweapon before it's sold off by a rogue agent.

The following weapons were used in the film Mission: Impossible II:

One of the main firearms used by IMF Agent Ethan Hunt (Tom Cruise) in the film is a Beretta 92FS Brigadier with Hogue rubber grips. He uses it along with a Beretta 92FS Compact, often together at once. Hunt carries the Brigadier in a shoulder holster. It's later held by Sean Ambrose (Dougray Scott) during his final confrontation with Ethan. Hunt does a clean mag change with his Beretta Brigadier.

A close-up of the Beretta Brigadier in hand of Sean Ambrose's (Dougray Scott).

Along with his Beretta 92FS Brigadier, Hunt also carries a Beretta 92FS Compact with a Hogue Handall grip sleeve. He carries this handgun in a lefty Galco SOB holster allowing for a weak-side draw (permitting for a drawn pistol in each hand). 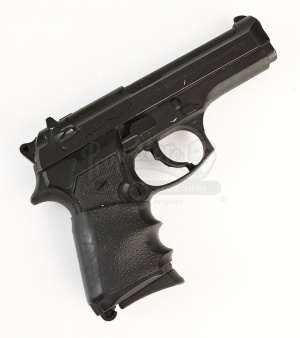 A close-up of the Beretta 92 Compact as Hunt cocks the hammer.

Hunt fires his Beretta 92 Compact from his motorcycle.

Luther (Ving Rhames) is seen with a Beretta 92FS Inox after the surveillance van is blown up by an explosive device.

Luther (Ving Rhames) with his Beretta Inox right after the van is blown up.

Sean Ambrose (Dougray Scott) carries a Sphinx AT 2000 pistol in "duotone" finish as his main sidearm. This weapon is a Swiss-made derivative of the CZ 75, and is chambered for 9x19mm (as are many of the pistols in the movie). 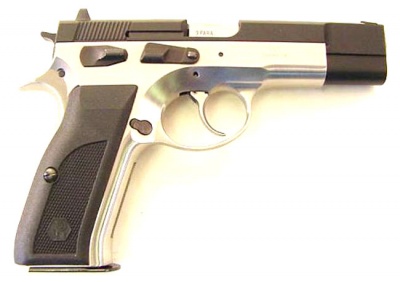 Sean Ambrose (Dougray Scott) with his Sphinx AT 2000.

Ambrose points his Sphinx AT 2000 at Nyah (Thandie Newton).

Ambrose takes out his Sphinx to threaten McCloy (Brendan Gleeson) into signing over shares of BioCyte to him.

Ambrose fires the Sphinx from a motorcycle.

Hugh Stamp (Richard Roxburgh) carries the Vektor CP1 as his main sidearm throughout the movie. The Vektor is an interesting choice for Stamp, since the character appears to have a South African security background, and Vektor as a company is apparently a small-arms division of DENEL Corporation, a group with ties to the South African military and security apparatus.

Hugh Stamp (Richard Roxburgh) fires his Vektor CP1 during the shootout in the BioCyte lab.

Stamp draws his Vektor CP1 as he goes to search for Hunt.

One of Ambrose's men, Ulrich (Dominic Purcell), carries a Steyr GB as his sidearm. 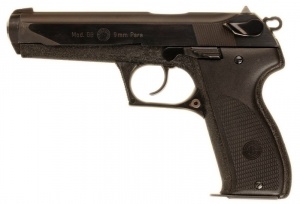 One of Ambrose's men, Ulrich (Dominic Purcell), fires a Steyr GB in the BioCyte lab.

Ulrich fires the Steyr GB from the passenger's side (they're in Australia).

Another of Ambrose's men fires a Glock 17 at the helicopter carrying Luther (Ving Rhames). Glock 17s are also used by the security personnel in the mansion at the beginning of the film.

Security guards in the villa draw Glock 17s on Ethan Hunt and Nyah.

One of Ambrose's men fires a Glock 17 at Luther's chopper.

A Heckler & Koch USP Compact is carried by Sean Ambrose (Dougray Scott) as a backup weapon, along with his Sphinx AT 2000. It is dropped in the sand when Hunt and Ambrose jump from their motorcycles to engage in hand to hand combat, and later used by Hunt. While the full-size USP had appeared in numerous movies and television shows at the time, Mission: Impossible II is the first known cinema appearance of the smaller USP Compact.

NOTE: There was much confusion regarding the origins of the USPc during the movie's release, since Ambrose is never shown carrying or drawing the weapon in the finished film. However, in the script, the fight between Ambrose and Hunt began on a rock shelf overlooking the beach after the motorcycle crash. Ambrose was supposed to draw his backup USPc after losing his Sphinx AT 2000 and then point it at Hunt, before Hunt charged him and sent them both falling to the beach below, thereby causing him to drop the USPc in the sand. This scene was removed in the final cut of the movie, though snippets of the scene appeared in some trailers for the film.

Ambrose drops a H&K USP Compact in the sand during the fight with Hunt.

Hunt kicks up Ambrose's H&K USP Compact from the sand.

The BioCyte security personnel all carry full-size Heckler & Koch USPs as their sidearms.

In the BioCyte lab, Hunt shoots and kills a guard armed with an H&K USP.

A guard patrols the facility armed with an H&K MP5A2. He appears to have a H&K USP in his holster, judging by the notches above the magazine well and the texture on the grip.

At least one of Ambrose's men uses a SIG-Sauer P228 as his sidearm.

One of Ambrose's men pulls back into his car during the chase, with a SIG P228 in hand.

Most of the BioCyte security guards and some of Sean Ambrose's (Dougray Scott) men, are armed with Heckler & Koch MP5A2 submachine guns.

A BioCyte guard fires his H&K MP5A2 during the lab shootout.

Another BioCyte guard fires an MP5A2 at Hunt to prevent him from getting the injection gun containing Chimera.

A guard patrols the island storage facility armed with an H&K MP5A2.

One of Ambrose's men runs out of the island storage facility with an MP5A2 (this one fitted with a dual-mag clamp) in hand.

One of Ambrose's men in a car sticks his MP5A2 out the window to shoot at Hunt.

One of the MP5A2s used in the film is fitted with a Surefire 628 dedicated forend weaponlight.

A guard fires another MP5A2 (this one fitted with a Surefire 628 forend) at the IMF helicopter.

During the final chase, several of Ambrose's men use Heckler & Koch MP5Ks fitted with extended barrels (these are not MP5K-PDWs as reported previously; they lack the folding stock).

One of Ambrose's men fires his H&K MP5K at Luther from the passenger's side window.

The thug with his MP5K as his car is hit by Luther's grenade. Note the extended barrel.

Hunt shoots another of Ambrose's men armed with an MP5K.

One of Ambrose's men fires a SA Vz.61 Skorpion at Hunt during the final chase.

One of Ambrose's men fires a Skorpion SA Vz 61 from his car.

Luther (Ving Rhames) aims a Colt Model RO635 Submachine Gun fitted with a C-More sight mounted in front of the carrying handle and a M16/AR15 brass catcher from the helicopter during the final chase.

During the shootout at BioCyte facility, one of Ambrose's men is armed with a Mossberg 590A1 SBS shotgun.

The guard leaping in the air is armed with a Mossberg 590A1 SBS.

The BioCyte guard fires his Mossberg 590A1 SBS Shotgun.

When the BioCyte guards are responding to the break-in at the lab, several of them run past a dead guard who has an Ithaca 37 shotgun lying on the floor beside him.

A dead guard (partially obscured by another guard running past him) at BioCyte labs lies on the floor with an Ithaca 37 nearby.

After being shot at, Luther puts down his Colt and picks up a DPMS M-37 Flare Launcher to use against Ambrose's men. This launcher is in the pattern of an AR-15 upper receiver, so to be used must be mounted on an appropriate lower. In this case it has been mated with an M4 type lower, giving the launcher a retractable stock, and has a C-MORE sight mounted on the rear receiver. Although in reality this launcher is a 37mm gas/flare gun, in this case it is depicted in the film as firing 40mm HE grenades.

DPMS M-37 as sold, without a lower receiver or sight.

DPMS M-37 mounted on an M4 lower receiver, as in the movie. This example uses an M203 leaf sight mounted on the rear receiver.

Luther (Ving Rhames) loads up his M-37 launcher with a fake HE grenade.

Luther aims the launcher from the helicopter.

In his fight with Stamp, Ethan Hunt (Tom Cruise) tosses an M26 hand grenade through Stamps's legs, distracting him and allowing Ethan to defeat him until the grenade's explosion knocked out Stamp.

Hunt pulls out the M26 grenade.

A closeup of M26 grenade thrown by Hunt.

A custom rocket launcher based on a Dan-Inject JM tranq. rifle is used to fire a missile containing mission information for Ethan at the film's beginning.

The original barrel of the tranquilizer rifle has been removed. The scope base, which has a C-more sight attached, doubles as a launch pad for the missile. Realistically, the missile's backblast would burn the shooters eyes out.