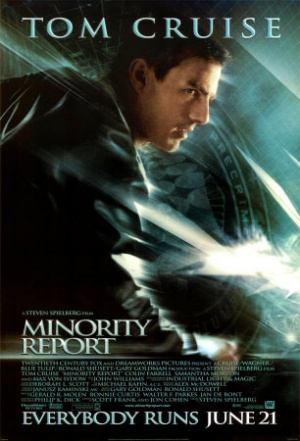 Minority Report is the 2002 science fiction thriller directed by Steven Spielberg and was adapted from a Philip K. Dick short story. Set in a future United States where the crime of murder can be predicted, Tom Cruise stars as John Anderton, a law enforcement officer who is head of "Precrime", the US government agency in charge of apprehending the individuals before they can commit their crimes. Anderton then finds himself on the run where he himself is charged with a predicted murder. The film's cast includes Colin Farrell, Max von Sydow and Neal McDonough. The film's events would later be continued in a FOX television series that premiered in 2015.

The following weapons were used in the film Minority Report:

The Beretta 9000S is the main sidearm of Chief John Anderton (Tom Cruise). 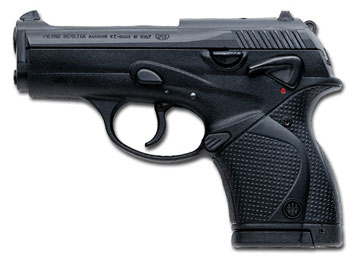 In a pre-cog vision, John Anderton prepares to shoot Leo Crow with his Beretta.

An ornately-decorated Smith & Wesson Model 1 1/2 revolver with ivory grips and gold frame is presented to Lamar Burgess (Max von Sydow). Lamar says it was presented to Generals at the end of the American Civil War. 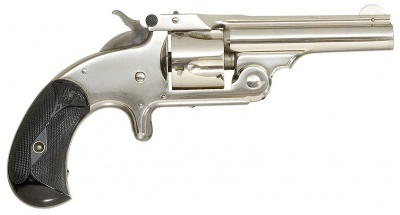 Lamar Burgess is presented with the Civil War revolver.

Lamar Burgess loads his revolver when the commotion starts up.

The agents who chase Anderton into the car factory are armed with "sonic guns", which appear to incapacitate suspects with a strong non-lethal sonic pulse. Anderton is also seen using the weapon. The weapon also appears to be a fabricated prop.

Closeup of an agent holding the "sonic gun".

When the Pre-cops confront Anderton to put him under arrest, they are seen carrying "sick sticks", collapsible batons (similar to ASP batons) that appear to make a target spontaneously vomit when struck.

A Pre-cop prepares to use the "sick stick".
Retrieved from "http://www.imfdb.org/index.php?title=Minority_Report&oldid=1484409"
Categories: