Man Who Would Be King, The 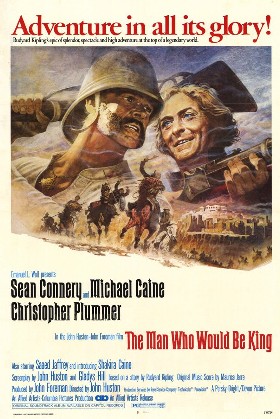 The Man Who Would Be King is a 1975 feature film adaptation of the 1888 Rudyard Kipling short story. Directed by John Huston, the film is set in late 19th century India and follows Peachy Carnehan (Michael Caine) and Danny Dravot (Sean Connery), two rowdy former NCOs of the British Raj, who decide to cross the border through the Khyber Pass into the region of Kafiristan in Afghanistan to become kings and get rich.

The following weapons were used in the film The Man Who Would Be King:

Danny Dravot (Sean Connery) and Peachy Carnehan (Michael Caine) smuggle 20 Martini-Henry rifles in order to fight their way to power when they get to Kafiristan. The rifles are later issued to 20 soldiers of Danny and Peachy's newly trained army.

Peachy shows Rudyard Kipling the 20 Martini-Henrys that they plan to smuggle over the border with them.

Peachy and Danny shoot at raiders.

Danny and Peachy's army during their first battle.

Highlight for Spoilers: Peachy orders his 20 riflemen to fire on the priests after they realize Danny is not a god.

One of Danny and Peachy's riflemen ejects a used cartridge.

Peachy and Danny stand ready to use their Martinis as clubs after expending all their ammunition.

Muskets are carried by the locals in India and later in particular by a group of travelers who try to rob Danny Dravot (Sean Connery) and Peachy Carnehan (Michael Caine).

The muskets seen early on in the film.

A group of strangers look over Danny and Peachy's belongings.

A good shot of the musket from the side.

A boy aims his musket at Peachy and Danny but does nothing.

Peachy spits a .450-577 cartridge he put into his mouth earlier into the campfire, which goes off- giving Peachy and Danny a chance to jump the strangers.