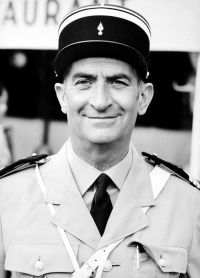 Louis Germain David de Funès de Galarza was born to Spanish parents in France, 31 July 1914. Before becoming famous comic, was only an average actor of theater and film roles. Turning point in his career came at a time when his age already for 49 years with major role in the comedy movie series about the gendarmes. Later in the films about Fantomas he cast Commissioner Juve, played here with Jean Marais. He also met with the director Gerard Oury and made in cooperation with the actor André Bourvil in comedy The Sucker. The result of 11,752,000 viewers enrolled in French film history, as well as the later film The Big Runaround (filmed in the same co), where the result was 17 million viewers over three months (in French cinemas this record until surpassed Titanic). While in France for many years been enormously successful, in the U.S. was almost unknown. He died of a heart attack on the 27th January 1983.