Legend of the Lost

Legend of the Lost is a american-Italian adventure drama directed by Henry Hathaway in 1957. The trio of travelers represented by callous wilderness guide and alcoholic Joe (John Wayne), refined treasure hunter Paul (Rossano Brazzi) and lovely prostitute Dita (Sophia Loren) goes into the desert. Dita is in love with Paul, but only in the harsh desert conditions, reflects the true nature of both men ...

The following weapons were used in the film Legend of the Lost: 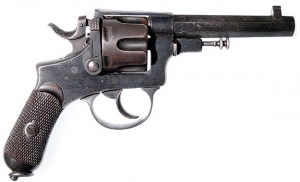 Paul (Rossano Brazzi) shot off a bottle of brandy from Joe´s mouth.

Joe (John Wayne) give a revolver Bodeo M1889 to Dita for a defense.

Dita (Sophia Loren) shot Paul, when attacked at Joe with a knife.