The Last Samurai is a 2003 historical drama that stars Tom Cruise as Nathan Algren, a disillusioned American Civil War and Indian Wars veteran who travels to Japan to take a job training soldiers in modern weaponry in order to help wipe out the Samurai. When he is captured by the Samurai, Algren comes to learn their ancient warrior ways. The film was directed by Edward Zwick (Glory, The Siege), who would later direct Cruise in 2016's Jack Reacher: Never Go Back.

The following weapons were used in the film The Last Samurai:

Nathan Algren (Tom Cruise) uses an early model Colt 1872 Open Top revolver while training the Imperial Japanese army. One memorable scene with this gun is when Nathan Algren draws his Colt to scare a training soldier into shooting him and proving that the soldiers are not ready to battle the Samurai. Algren is later seen packing away the revolver.

"Tell this man that if he does not shoot me, I will kill him."
Algren draws his Colt.

Algren is seen packing away his Colt.

Bagley fires his Colt SAA at the approaching samurai.

Algren uses a Smith & Wesson Schofield during his first battle with the samurai.

Nathan Algren fires a Smith & Wesson Schofield during his first encounter with the samurai.

During one of Algren's flashbacks, Bagley is seen using a Remington 1858 New Army to massacre Native Americans.

Bagley with his Remington 1858.

In the beginning of the film, Nathan Algren (Tom Cruise) shows off and fires a Trapper model of the Winchester Model 1873 at a trade show. His Winchester is fitted with a large lever loop and Algren states it is a '73 trapper, which could hold 6 + 1 in the chamber. Algren is seen using the large lever loop to do a one-handed reload of the rifle, a move often seen performed by John Wayne in several of his Westerns.

Gant armed with his Winchester rifle.

The Imperial Army of Japan uses Springfield Model 1861 muzzle-loading rifles as their standard issued weapons during the first half of the movie. Unlike many muzzle-loaders, some of these guns appear to be able to fire two shots before having to reload, all though this could be incorrect. But this could be a trick of the camera where the line of soldiers reloaded, and fired again, or a another line assembled off camera. Also the use of muzzle loading rifles is Anachronistic, BY the 1870's Japan's Imperial army already adopted the Snider-Enfield a breachloading firearm

The Imperial Army train with their Springfield Model 1861's.

Algren shows an Imperial Japanese soldier how to properly aim his Springfield Model 1861.

Imperial Japanese soldier aiming his Springfield Model 1861. Enfield Pattern 1853's can be seen in the foreground and background.

Along with the Springfield Model 1861, Imperial Japanese troops were also equipped with Enfield Pattern 1853 rifles during their training with Algren.

The Imperial Army train with their Enfield Pattern 1853's.

In the second half of the movie, the Japanese Imperial Army carries German bolt-action Mauser Rifles, in spite of the fact they were supposedly being armed by the US (In actual history it was the Prussians who did arm the Japanese with Mausers). The rifles used on-screen are Mauser M1871/84 models converted in appearance to appear as the earlier period-appropriate (1877) single-shot Mauser Model 1871s.

The Imperial Army fire their Mausers with fixed Seitengewehr 71 bayonets at the samurai.

In addition to the Mauser M1871/84, the standard, period correct, single shot Mauser M1871 rifles are also seen. Primarily in the scenes taking place in Tokyo later in the film. It can be distinguished from the later M1871/84 by the different shaped and sized trigger guard, a cleaning rod instead of a stacking rod, and overall slimmer appearance due to the lack of a magazine tube underneath the barrel. It appears the single shot rifles were used for non-firing scenes while firing scenes were done by the later repeating models. 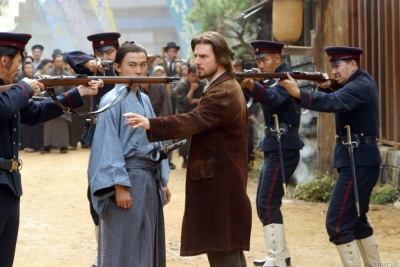 Soldiers train their rifles on Algren.

The Imperial Army is shown training with Howitzers after Nathan Algren (Tom Cruise) comes back from being with the samurai for a few months. The Howitzers are later used in the final battle scene. Both the Mountain Howitzer and the Field Howitzer are the same caliber projectile, but require different powder charges. The movie utilized the Field Howitzer as shown in the screen shots below. 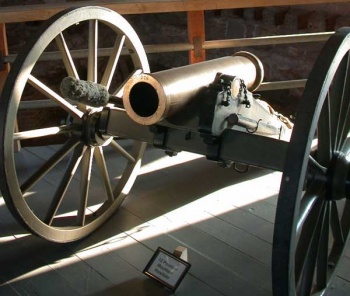 The Imperial Army train with their Field Howitzers.

The Imperial Army uses Gatling Guns to slaughter the remaining samurai in the final charge scene. According to Colonel Bagley (Tony Goldwyn), "These guns can fire two hundred rounds a minute, and their new cartridges have cut down on jamming." These particular guns were heavily repaired by Master Armorer, Gary Harper, onsite, prior to shooting.

A 1874 Gatling Gun on a carriage made by Master Armorer, Gary Harper, as seen in the film.

Master Armorer, Gary Harper, oversees the Imperial soldiers as they prepare to fire their Gatlings.

The 1874 Gatling Guns are unleashed upon the Samurai.
Retrieved from "http://www.imfdb.org/index.php?title=Last_Samurai,_The&oldid=1374781"
Categories: