The following weapons were used in the film Lakeview Terrace:

Officer Abel Turner (Samuel L. Jackson) carries a Beretta 92FS as his on-duty sidearm in the LAPD. County Sheriff's Deputies also carry and use Berettas during the climax.

Turner at the ready with his Beretta.

Turner draws his Beretta on a suspect.

A deputy holds his Beretta.

Abel's partner Javier Villareal (Jay Hernandez) carries a Glock 17 as his sidearm in the film.

Abel Turner (Samuel L. Jackson) carries a Smith & Wesson 6906 as his off-duty firearm. He most notably uses it to dispatch a criminal in Mattson's house. Chris Mattson (Patrick Wilson) later takes and uses the gun. 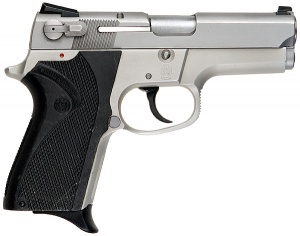 Turner fires at a criminal.

Turner holds his Smith & Wesson after shooting the criminal.

Chris holds the Model 6906 on Turner.

Abel Turner (Samuel L. Jackson) carries a Smith & Wesson Model 36 as his back-up rod in the film. He most notably uses it during the climax.

A Remington 870 shotgun can be seen in Officer Turner (Samuel L. Jackson) and Officer Villareal's (Jay Hernandez) patrol car. A suspect also uses a Remington to fire at the officers, and later threatens to shoot himself with it. After encouraging him, Turner disarms the suspect.

A Remington 870 between Turner and Villareal.

The suspect holds his shotgun under his chin.

To the suspect's amazement, Turner chambers the shotgun.

A police officer on the background holds a Remington (circled in red).
Retrieved from "http://www.imfdb.org/index.php?title=Lakeview_Terrace&oldid=1223388"
Categories: