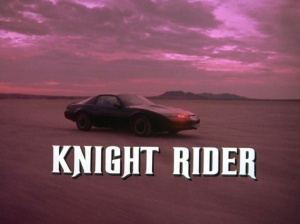 Knight Rider was a television action series that starred David Hasselhoff as a former police detective who after being shot and left for dead, is retrieved by a secret agency, given a new face and a new identity as well as KITT, an ultra-advanced car which houses an artificial intelligence. Now in his new identity as Michael Knight, he drives the car while working for the agency to right wrongs wherever it may be. The series was created by Glen A. Larson, who had a hand in such classic television series as the original Battlestar Galactica, Magnum P.I., and The Fall Guy. The series aired in the US on NBC for four seasons from 1982-1986. The series also would spawn several made-for-television movies, and two television series revivals: 1997's Team Knight Rider and 2008's Knight Rider.

The following lists the seasons of the series Knight Rider: