Killing Them Softly is the film adaptation of Geroge V. Higgins' 1974 novel Cogan's Trade. The film was adapted for the screen and directed by Andrew Dominik and stars Brad Pitt as Jackie Cogan, a mob hitman who is hired to eliminate those involved in the heist of a poker room. The film's cast includes Ray Liotta, Scoot McNairy, Ben Mendelsohn, and James Gandolfini.

The following weapons were used in the film Killing Them Softly:

Dillon (Sam Shepard) is seen carrying a Glock 19 in his short scene. Police officers (the film never specifies a setting, but the books are set in Boston) can been seen with Glock 19s as well.

Dillon with his Glock 19.

Dillon with his Glock 19.

An officer with his Glock drawn.

Steve threatens Markie with his S&W 66.

Jackie Cogan (Brad Pitt) uses a Browning Hi-Power during his first hit. The hit occurs in slow motion, giving the audience some very detailed look into the Hi-Power at work.

Cogan carries a Smith & Wesson Model 36 for his second and third hits.

Cogan checks that his S&W 36 is loaded before swinging it shut. Revolver fans, as always, are appalled.

Cogan uses a Mossberg 500 Cruiser for a hit. Cogan's Cruiser has been modified with a Surefire foregrip and a clamp on LaserLyte tri-rail fitted to the magazine tube. Please see the talk page for more details and discussion on the shotgun's accessories. 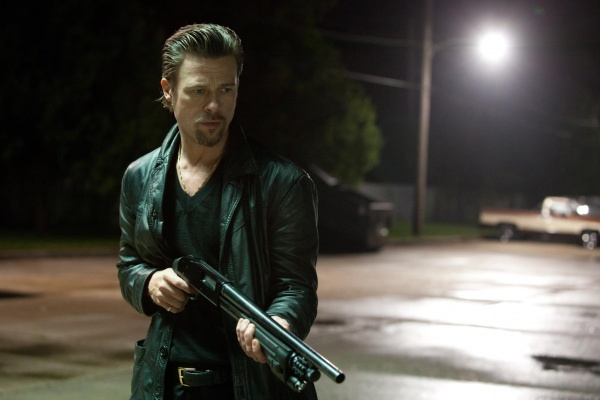 Cogan takes aim at his target.

Short barreled Side by Side (Sawed Off)

Sawn-off Double Barreled Shotguns are also used in the film. The first is seen during Squirrel's (Vincent Curatola) flashback to the first poker game robbery. The second is used by Frankie (Scoot McNairy) during the second robbery. The barrels have been shortened down to where the tips of the shells are exposed. Frankie compares it to a hand grenade.

A DBS at the first robbery.

Frankie with the shotgun during the second robbery.
Retrieved from "http://www.imfdb.org/index.php?title=Killing_Them_Softly&oldid=1394883"
Categories: