Khartoum is a 1966 movie by Basil Dearden starring Charlton Heston as General Charles Gordon and Laurence Olivier as the Mahdi (Muhammad Ahmed). The story is based on the siege of Khartoum during the Mahdist war in 1883-1885.

The following weapons were used in the film Khartoum: 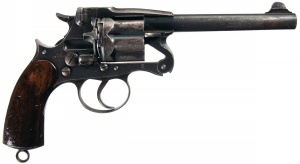 General Gordon holds his Enfield Mk II in front of his troops.

General Gordon with Enfield Mk II after the battle.

Egyptian officer with Enfield Mk II during the final battle.

The Webley .455 Mk VI holds a British officer in battle. This revolver is also used to ignite the fuse of the mine. It's completely anachronistic because Mk VI was adopted in 1915.

A British officer holds his Webley .455 Mk VI in battle with Mahdists.

The part of the revolver is seen outside the box.

A pair of Oriental flintlock pistols are seen in the collection of antique weapons in General Gordon's apartments.

Martini-Henry rifles are the main weapon of British and Egyptian soldiers and the Mahdists. It is hard to identify the model used but they are most likely the MkIII.

A Egyptian soldier holds a Martini-Henry rifle with sword bayonet.

Mahdists with rifles on a boat.

Civilians evacuees from Khartoum fire Martini-Henrys at Mahdists from the river steamer.

A mortally wounded man with Martini-Henry on the steamer.

The firing squad of Egyptian soldiers with Martini-Henry rifles.

Some of the British soldiers are armed with Remington Rolling Block rifles.

In at least one scene British soldiers carry rifles that appear to be M1917 Enfield, visually modified by removing bolt handles and rear and front sights and adding fake rolling block breechblocks.

The shape of stocks allows to identify M1917 Enfield rifles.

Jezail and Ottoman muskets are seen in the collection of Eastern weapons in General Gordon's apartments.

A good view on the lock of the musket.

A different version of Jezail is seen on the wall. It if fitted with a percussion cap lock rather than a flintlock.

One of the weapons mounted on the river steamer which sailed from Khartoum is a Nordenfelt gun. It is supposedly 5-barrel rifle-calibre model. In the final scene Nordenfelt gun is used by Egyptian soldiers during the defence of the Khartoum palace. 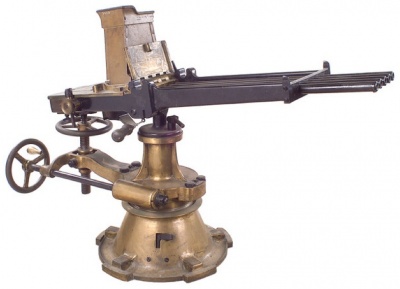 Egyptian soldiers are firing Nordenfelt gun mounted on board of the river steamer.

The Nordenfelt gun is seen on the balcony.

Mahdists and Egyptian soldiers use home made fuse bombs, attached to spears or on cords.

Numerous field guns are seen in the movie. All of them are breech-loading, but strangely enough, the shot is made by a burning torch.

The Egyptian artillery on the march.

The Egyptian cannons outside the walls of Khartoum.

Cannons aboard of the British steamer.

The former Egyptian gun is captured by the Mahdists ...

.... and in the battle of Khartoum.
Retrieved from "http://www.imfdb.org/index.php?title=Khartoum&oldid=1159466"
Categories: