The following weapons were used in the film Karate Kill:

The Heckler & Koch USP Compact is one of the one-armed Keiko (Asami) firearms. While her right arm was amputated, she is a brilliant gunfighter. Kenji (Hayate Matsuzaki) briefly holds her pistol at he one point.

The Beretta 92FS Brigadier is the Keiko's main sidearm. 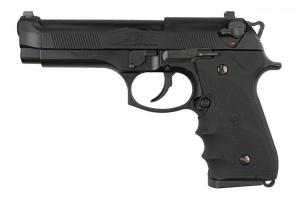 Beretta is seen at the center.

Keiko teach Kenji a correct aiming of the handguns.

Simona aims her Desert Eagle (at the left). The barrel is seen at the right.

Another view of Simona's Desert Eagle.

Simona raises her pistol (at the left). Benning about to draw his Glock at the right. 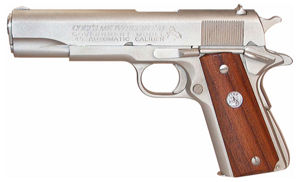 Vendenski threatens Mayumi with his Colt.

The slide is seen.

Keiko captures the pistol from Simona. 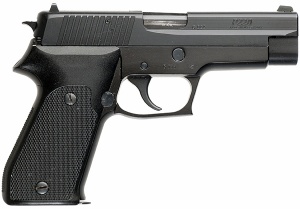 ...but didn't use it, being held on gunpoint by Keiko's Mossberg.

This revolver is seen behind the Keiko only arm.

The grip is seen better.

This revolver is seen under the H&K mag.

Texan Bartender (Jeffrey James Lippold) pulls Single Action Army at the one point. Another SAA can be seen on the table, among Keiko's guns. A single movie prop was used.

Another view of his SAA.

The SAA can be seen aimed at the right.

SAA can be seen at the background, left.

Another view of the same character (second from the right)...

...after he was hold on gunpoint by Keiko.

Capital Messiah member climbs on the container, revolver in hand.

Capital Messiah member (at the left) aims the revolver.

Capital Messiah member (at the left) runs, revolver in hands.

A perfect view of his Colt Python.

Capital Messiah member (at the right) aims the revolver.

A slightly other view of his revolver.

Capital Messiah member (at the center) runs, revolver in hands.

A perfect view of his Smith & Wesson.

..and holds Kenji on gunpoint.

Keiko charges the Mossberg by her only arm.

Keiko uses improvised hook to pulls the trigger. Actually, the gun recoil is to strong, so, such devise are useless.

...only to be gunned down by Keiko.

Another Capital Messiah member tries to grabs the shotgun from the table.

Capital Messiah member holds the shotgun at the background, left.

The same gunman holds his shotgun a few minutes later.

The shotgun is charging.

Muzzle and tubular mag of Kelly's mossberg can be seen.

One-armed Keiko owns a Heckler & Koch G36. Once again, this rifle is a very strange choice for the one-armed gunman.

The Heckler & Koch muzzle is partly seen at the left.

The scope is seen.

H&K is seen at the background, right. Assorted handguns is seen on the table. Keiko holds the Beretta.

The another view of the same rifle. Keiko holds Mossberg 500AT.

The rifle is seen on the table.

The Maruzen APS SR-2 can be seen on the table among other Keiko's guns.

This rifle is seen at the background, left.

The another view of the same rifle. Keiko holds Mossberg 500AT.

A slightly other view of the rifle. Keiko holds Colt Python.

The rifle is seen on the table.

Several Capital Messiah members can be seen armed with the M16A1 Rifles. Most likely, a single movie prop was used.

One of the Capital Messiah members briefly holds Norinco Type 56.

..after being gunned down by Keiko.
Retrieved from "http://www.imfdb.org/index.php?title=Karate_Kill&oldid=1382383"
Categories: