The following weapons were used in the film I Killed Einstein, Gentlemen! (Zabil jsem Einsteina, pánové!):

Various characters in movie are seen with a Roth-Steyr M1907 pistol. 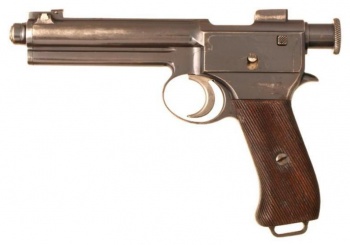 The police commander (Josef Hlinomaz) in one scene pulled out his sidearm from holster.

Some characters use a fantasy pistol from future.

Robert (Radoslav Brzobohatý) drew from his pocket a fantasy pistol.