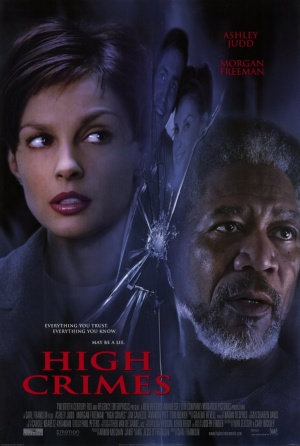 High Crimes is a 2002 thriller directed by Carl Franklin and starring Ashley Judd as Claire, a criminal lawyer whose husband Tom (Jim Caviezel) is arrested and put on trial for possible war crimes in his past life as a Marine that she had no idea he had. She teams with former JAG lawyer Charles Grimes (Morgan Freeman) to defend her husband from the atrocities he says he didn't commit.

The following weapons were used in the film High Crimes:

As Tom Kubik remembers his life as Sgt. Ron Chapman, he and the rest of his Marine team are armed with M16A1's on their mission in El Salvador.

An intruder who assaults Claire Kubik (Ashley Judd) in her home points a Colt New Service revolver at her. Claire is later seen holding the revolver.

A Marine guard is seen with a holstered Beretta 92FS.