Hannie Caulder is a 1971 Western starring Raquel Welch as the title character, a woman who wants to exact revenge on the gang of outlaw brothers who terrorized her and killed her husband. Robert Culp co-stars as a bounty hunter whom Hannie asks to train her in the ways of the gun. The film was directed by Burt Kennedy (The War Wagon) and the cast also included Ernest Borgnine, Strother Martin, Jack Elam, and Christopher Lee.

Hannie Caulder (Raquel Welch) carries an English Tranter self-cocking revolver. Based on the size, this is likely a 54-bore (.442 calibre) model. In the film, this revolver is scratch-made by a gunsmith named Bailey (Christopher Lee). 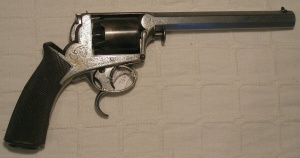 Hannie's Tranter new in the box.

Hannie with the Tranter. 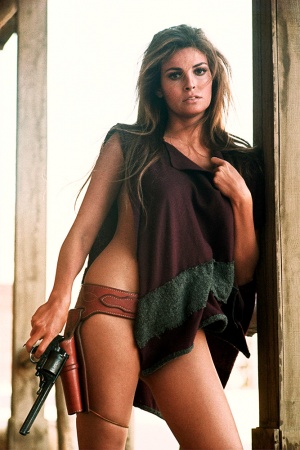 A publicity still of Raquel Welch as Hannie with the Tranter revolver.

Tom Price (Robert Culp) also carries an Adams Revolver on his strong side. He uses it to shoot the bottles that Hannie is missing with his Smith & Wesson and also in the gun fight with a group of bandits. When they arrive at Bailey's home (Christopher Lee) Bailey asks Price if that old Adams has blown up yet. Price replies that it's still holding true. This isn't an implausible scenario. The Confederacy imported approximately 1,000 Adams revolvers and there was a company in Chicopee Falls, Massachusetts that made a copy of the Adams. The Union purchased several hundred of the American Adams during the civil war as well. 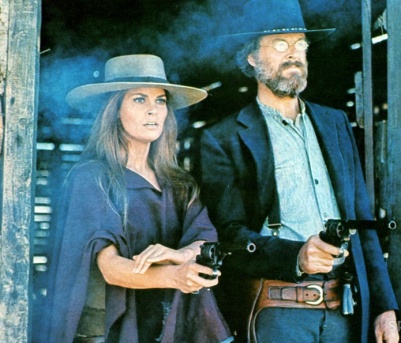 Emmett Clemens (Ernest Borgnine) uses a Remington 1875 throughout the film.

Both Frank Clemens (Jack Elam) and the mysterious Preacher (Stephen Boyd) in black use Colt Single Action Army Revolvers as their main weapons.

Frank grips a leg wound with his gun hand

Thomas Luther Price (Robert Culp) carries two revolvers one in a side holster and one in a cross draw holster. One of these weapons which Hannie takes in order to practice shooting appears to be a Smith & Wesson New Model No.3 with the 6.5" barrel.

Hannie with the revolver.

Price ejects the shells from the revolver after taking it back from Hannie.

Price in action with the Smith & Wesson

Hannie Caulder's husband holds a Trapper Saddle Ring Carbine on the Clemens brothers when they first arrive at his home.

Mr. Caulder looks out his window with his Winchester Model 1892 in hand

Mr. Caulder holds his weapon on the Clemens brothers

After attacking Hannie at her home, the Clemens brothers get involved in a shootout with a group of stagecoach guards who are armed with Winchester Model 1892 rifles.

The coach guards fire at the Clemens brothers

At the beginning of the film, the Clemens brothers rob a bank and are subsequently fired on by the Federales, who appear to be armed with the Spanish Mauser M1943.

Side view of Rufus' shotgun

Though directed by an American and starring well known American actors, "Hannie Caulder" was a product of Tigon British Film Productions, a UK production company famous for such B grade horror movies as Witchfinder General (1968), The Blood on Satan's Claw (1971), and The Creeping Flesh(1972). "Hannie Caulder" came to fruition because Tony Tenser, head of Tigon, had always wanted to make a Western and Raquel Welch was willing to make a western. The movie was filmed in Spain during the winter of 1971 and was distributed by Paramount in North America. In an interview with Gerald Peary, director Quentin Tarantino (famous for his love of cult and grindhouse movies) said the film was one of his inspirations for Kill Bill, stating: "Why I love Hannie Caulder so much is Robert Culp. He is so magnificent in that movie. I actually think there's a bit of similarity between Sonny Chiba and Uma Thurman (in Kill Bill) and Raquel Welch and Robert Culp in Hannie Caulder."

It's obvious that that the script was written by somebody who knew a thing or two about combat. Burt Kennedy ,who co-wrote (un-credited) and directed the movie, served with the U.S. Army 1st Cavalry Division in the South Pacific during World War II. He received the Silver Star, Bronze Star, and Purple Heart, Kennedy was buried at Arlington National Cemetery in 2001.