The CZ 75 SP-01 with a two tone finish appears as the "Kingmaker". It is the only pistol in the game. It is shown as operating in DAO, but the hammer is animated striking the firing pin with each shot. 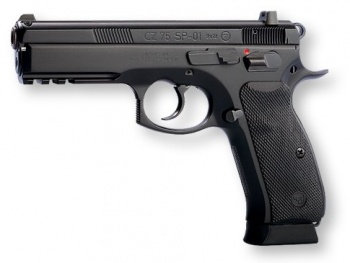 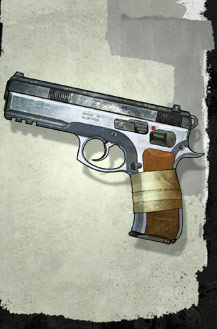 The Micro Uzi appears as the "Desperado".

The icon of the Micro Uzi.

The "Gatekeeper" seems to be a M3 "Grease Gun" with a longer barrel and handguard, seemingly based on that of a pump-action shotgun.

The Ruger Mini-14 GB-F appears as the "Partisan". It incorrectly fires exclusively in three-round bursts. The barrel is modeled with a similar length to that of the AC556k, but the fact that the front sight is mounted on the barrel with a combined bayonet lug implies that this weapon was actually based on a long-barreled gun that has been shortened. It is modeled with a 30-round magazine, but only holds 15 rounds unless the optional "Extended Magazine" is equipped.

The in-game icon of the truncated Mini-14.

The SKS appears as the "Huntsman". It is correctly reloaded with a 10-round stripper clip. If the Extended Magazine option is equipped, it will have the magazine replaced with that of the SKS-D, which in-game holds 20 rounds; reloading will then be accomplished by the insertion of 2 stripper clips. This is the only weapon to visually change with hi-cap magazines.

The SKS in all of its glory.

A hybrid weapon called the "Dawn Patrol" is one of the game's two starter weapons. It has the receiver and stock of an AR-18, with the front end of a Galil ARM attached to it. It is depicted with a 20-round magazine, which incorrectly holds 25 rounds, or 40 with Extended Magazines.

Put the two together, and you end up with... this.

A scoped Marlin Model 336 lever-action rifle appears in-game, known as "The Marshal". As with many of the game's other weapons, it features a left-handed ejection port; somewhat oddly, it still has a right-handed loading gate.

The Marlin as it appears in-game. Note how it features both a barrel band and a nose cap on the forend; normally, the 336 has one or the other.

A 1700s-style musket rifle, possibly modeled on a Kentucky Rifle.

A Winchester Model 1912 with rifle sights appears as the "Persuader".

The Winchester in-game; unlike the reference image, it features a checkered forend and (as mentioned) rifle sights. It also has a left-handed ejection port, like most of the game's weapons.

A variant of the Armsel Striker, possibly the Cobray Street Sweeper, fitted with an enormous muzzle brake appears as the "Chaperone". It incorrectly fires in full-auto in-game, as opposed to the real Striker, which is DAO.

The M60 appears as the "Jackhammer"

The M60 as it appears in-game.
Retrieved from "http://www.imfdb.org/index.php?title=Gotham_City_Impostors&oldid=1420424"
Categories: