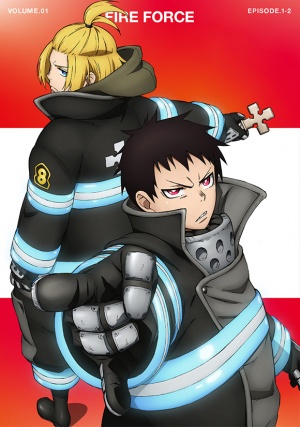 Fire Force (2019). The Japanese title of the show is 炎炎ノ消防隊, which means Blazing Firefighting Corps in English.

The following weapons were used in Season 1 of the anime series Fire Force:

What seems to be the Daewoo K5 is seen in a flashback sequence in "Formation of Special Fire Force Company 8 - The Mightiest Hikeshi". 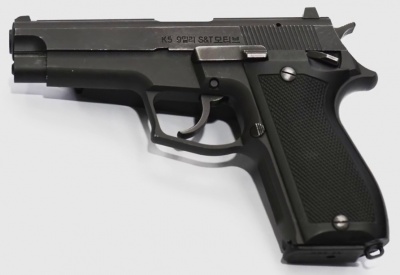 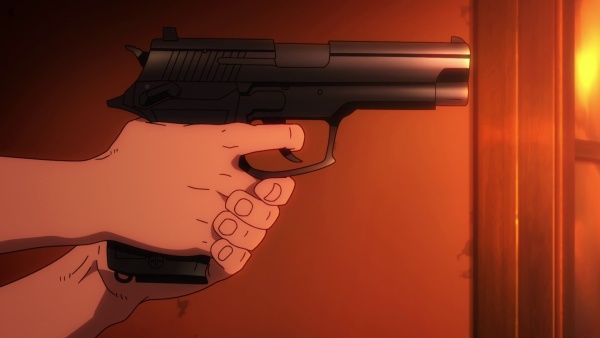 The pistol being used in the first half of "Formation of Special Fire Force Company 8 - The Mightiest Hikeshi". 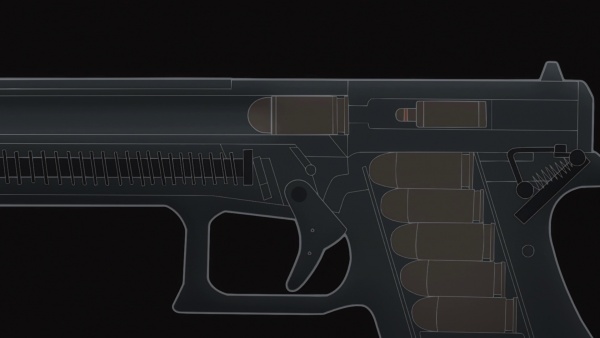 The Glock full-size pistol's X-ray in "The Battle Begins". 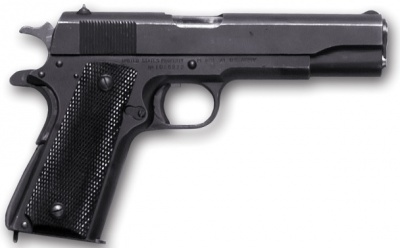 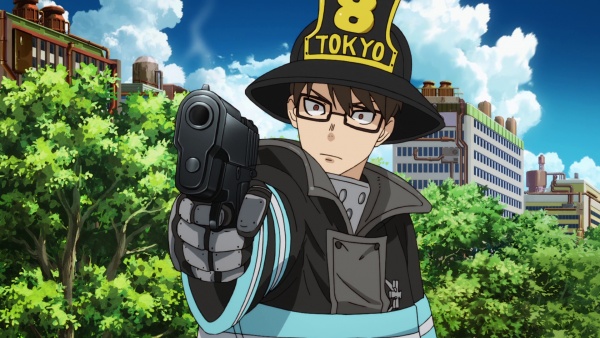 Takehisa aims the pistol in "The Hero and the Princess" during an anti-Infernal op. 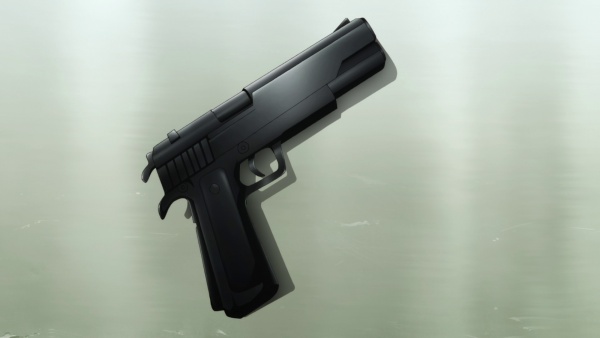 The said M1911A1 in "Formation of Special Fire Force Company 8 - The Mightiest Hikeshi". 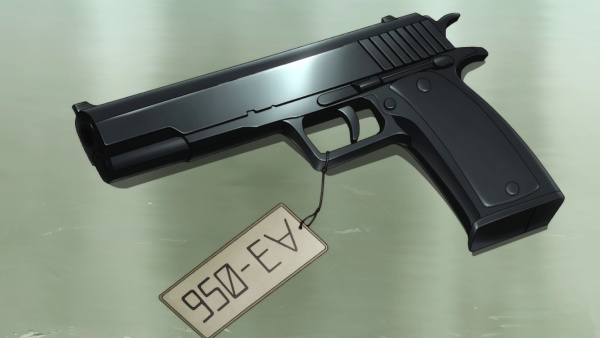 The pistol given to Takehisa after he gets discharged from TA service. 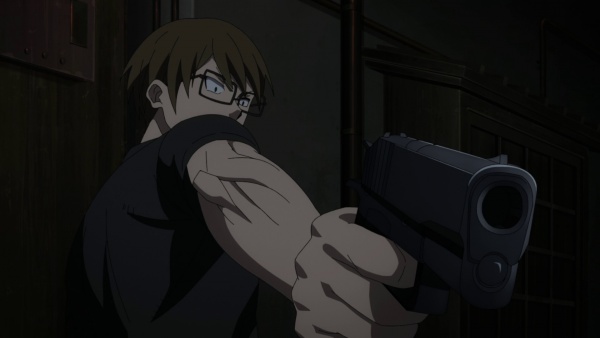 A fake Asakusa local turned Infernal is shot by Takehisa in the middle of "The Trap is Set". 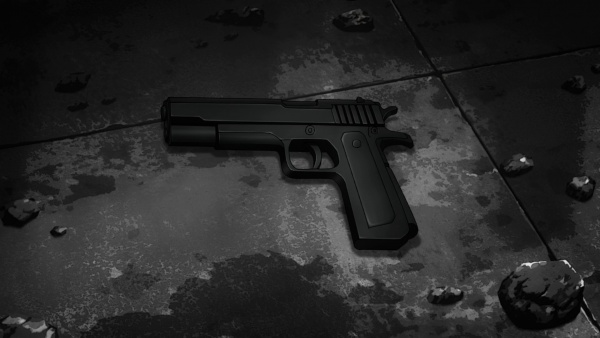 A SIG-Sauer P226 is seen with Vulcan in "Those Connected" when Dr. Giovanni goads him to shoot Akitaru Obi. 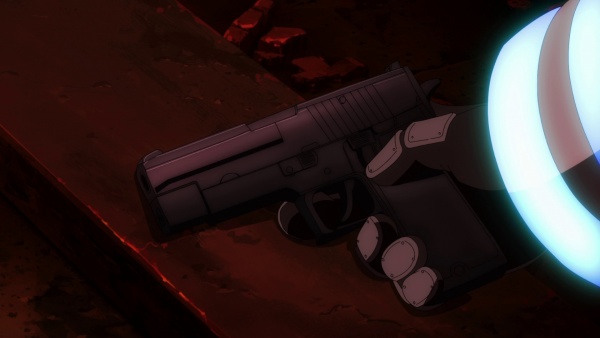 Vulcan takes the loaded P226 in "Those Connected". 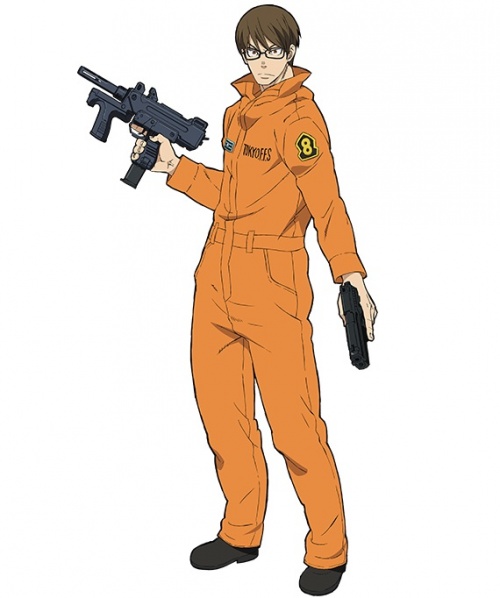 Official anime lineart of Takehisa posing with the PM-9. 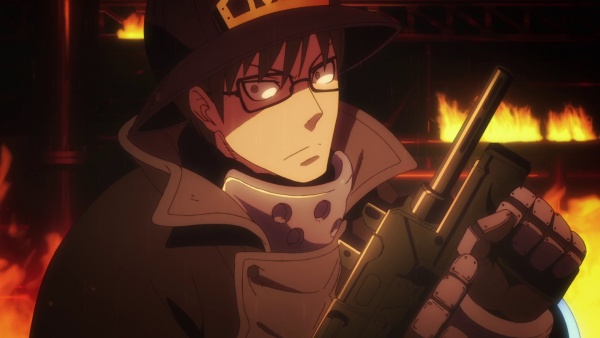 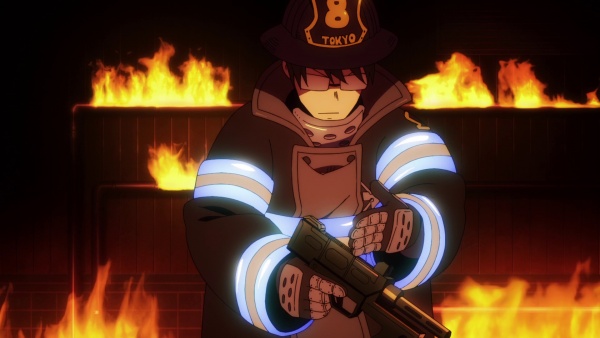 The PM-9 being given a bolt slap during an anti-Infernal operation. 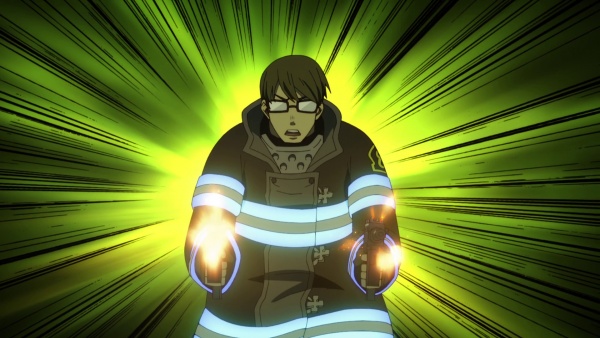 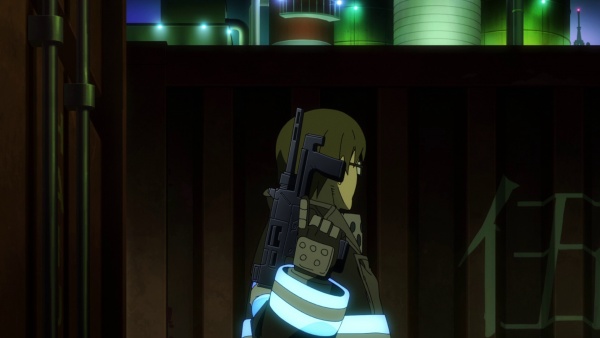 A good shot of Takeshisa's PM-9.

A SMG used by the TA appears to visually resemble something from the MP5SD series in terms of the foregrip. 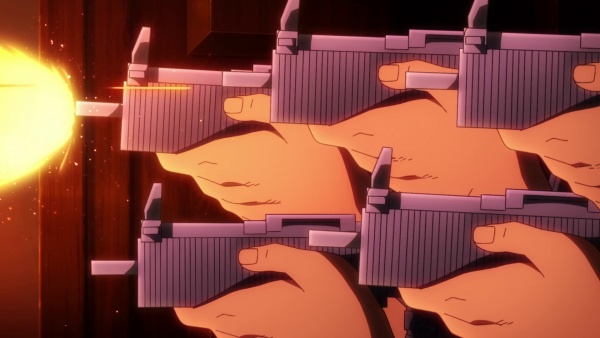 TA soldiers take out Tojo after he turns into an Infernal in "Formation of Special Fire Force Company 8 - The Mightiest Hikeshi".

Hinawa is seen to be using a hybrid rifle that's based on a Double rifle with some parts taken from the Tanegashima when he goes with Company 8 to infiltrate the Tokyo Metro subway platform. 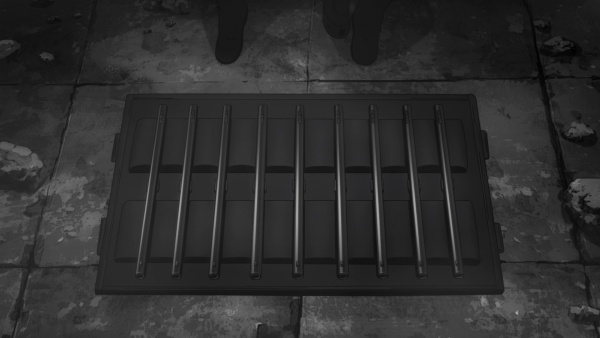 A row of several detachable gun barrels Hinawa brought with him in "Wearing His Pride". 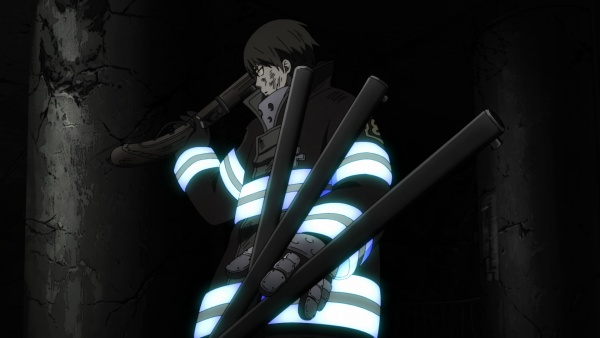 The rifle secured by Hinawa. From the looks of it, it's influenced seemingly by the Tanegashima. 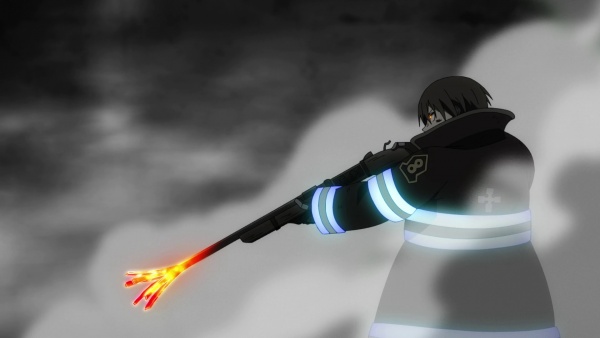 Hinawa lowering the shotgun after the removable barrel gets busted from firing powered 7.62 NATO rounds.

What seems to be an Ithaca 37 is used by Hinawa as his main shotgun of choice. 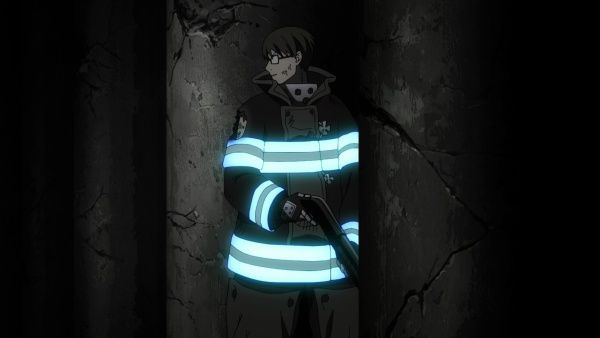 Hinawa with the pistol-gripped shotgun in "Wearing His Pride". Note the design of the pump and the (at least) lack of an ejection port on the receiver. 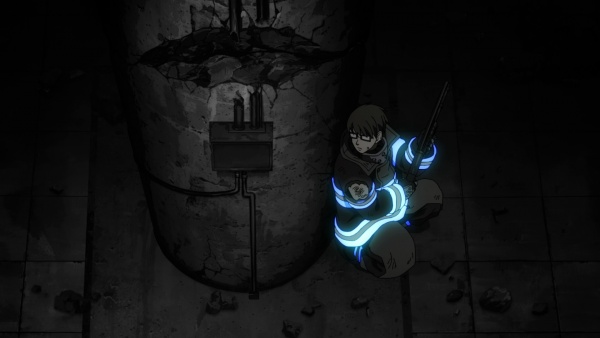 Hinawa taking cover from fighting with Arrow inside the deserted Tokyo Metro subway platform. Note that it's an extended barrel version.

What seems to be a M24 Sniper Weapon System is used by Takehisa as his main sniper rifle. 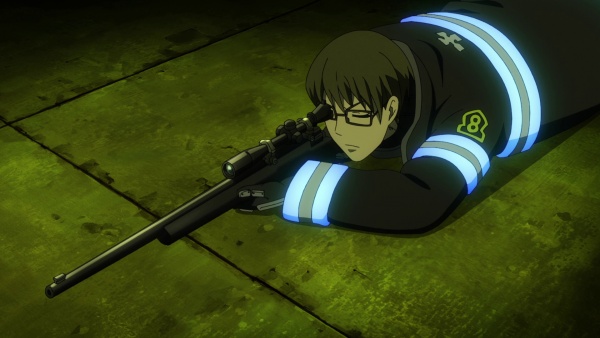 Takehisa snipes at Company 5 firefighters during a raid in "The Battle Begins".

The Extinguisher grenades are first seen in the Special Fire Force Company 8 Arsenal in "The Heart of a Fire Soldier". They're used to quickly subdues flames during anti-Infernal ops, but they were used in "Eve of Hostilities in Asakusa" to extinguish Commander Shinmon (Waka) Benimaru's flames.

A sphere-type grenade is seen with Obi when Company 8 infiltrates the abandoned Tokyo Metro subway system in "Those Connected". 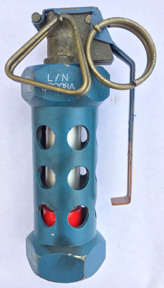 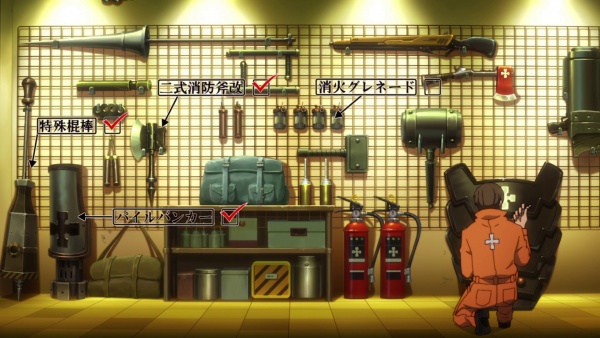 The grenades inside the armory in "The Heart of a Fire Soldier". The Japanese subtitles mention them on screen as "消火グレネード". 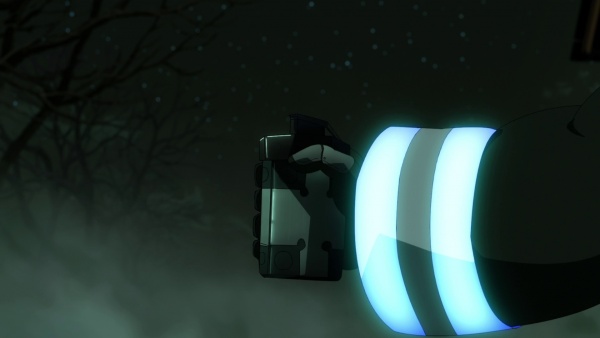 Captain Obi shows off the primed EG in "Eve of Hostilities in Asakusa". Its body appears to be influenced by the M84 stun grenade. 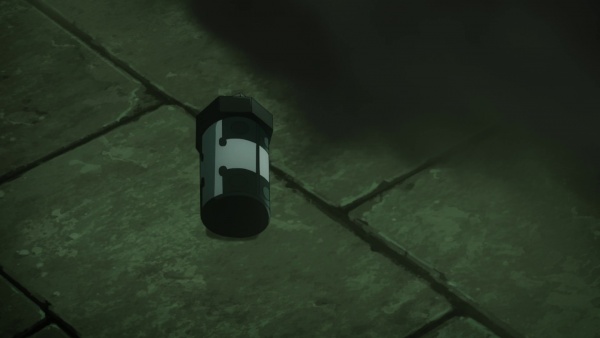 A dropped EG during the fight between Captain Obi and Commander Benimaru. 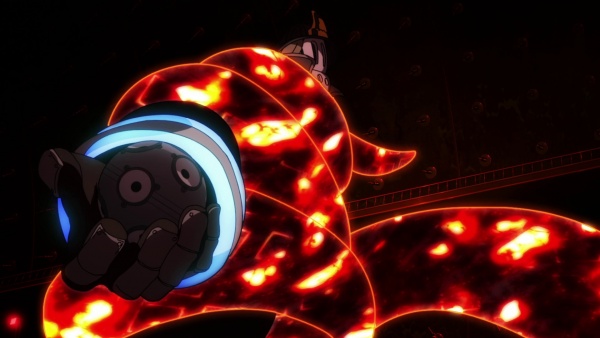 The sphere-type EG used by Obi in "Those Connected". 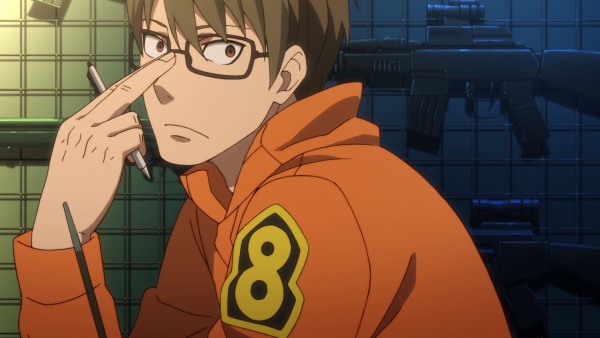 Several assault rifles are behind Takehisa in "The Heart of a Fire Soldier".
Retrieved from "http://www.imfdb.org/index.php?title=Fire_Force_-_Season_1&oldid=1389277"
Categories: