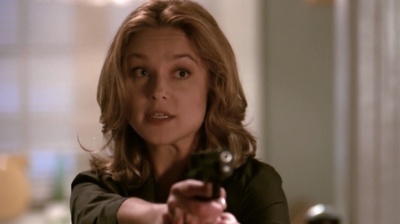 Elisabeth Röhm with a SIG-Sauer P228 as Detective Kate Lockley in Angel.

Elisabeth Röhm is an American actress best known for her roles as Kate Lockley in the series Angel and Assistant District Attorney Serena Southerlyn in the series Law & Order. She shares the record (along with Alana de la Garza) for the most ADA appearances in the original series with 85. She also has appeared in such series as The Last Ship and Hawaii Five-0 (2010).