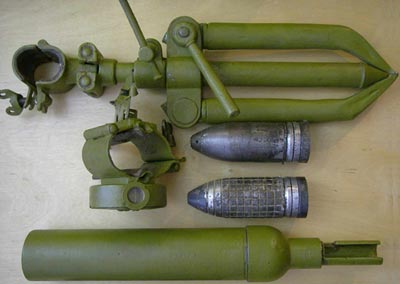 40.8-mm Dyakonov Rifle Grenade Launcher (Russian: "ружейный гранатомёт Дьяконова") was designed in 1916 by Capt. Mikhail Dyakonov. It was successfully tested but due to Russian revolution and civil war it was not put into service until 1928 in a slightly improved version with better sights and improved range. The Dyakonov launcher was used by Red Army until 1942 when it was rendered obsolete. In 1944 a VKG-40 anti-tank shaped charge grenade was designed ("40" designating the caliber, not the year) and an attempt to revive Dyakonov launcher was made, but VKG-40 was not good enough.

The Dyakonov launcher had a rifled barrel that could be attached to the muzzle of a standard Mosin Nagant M1891/30 rifle instead of bayonet. A bipod and sighting device were also attached to the rifle. The main two rounds used were flare and fragmentation rounds, and unlike some other rifle grenade launchers, the grenades were fired by using a live cartridge, not a blank one.

The Dyakonov Rifle Grenade Launcher and variants can be seen in the following films, television series, video games, and anime used by the following actors: