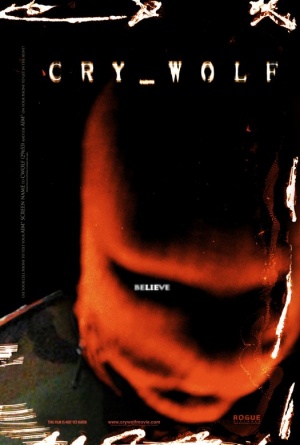 The following firearms were used in the film Cry_Wolf:

"The Wolf" (Spoiler Alert: "The Wolf" is actually Dodger Allen (Lindy Booth).) is seen handling a nickel plated Bruni Olympic 5 with black grips in the film. It later turns into a nickel plated Colt Lawman Mk III, due to a continuity error. The Bruni Olympic 380 is a starter/blank gun that fires 9mm blanks, but in the film it's suppose to act as a real gun as it is only seen for a couple of seconds. 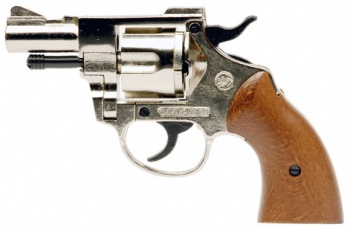 "The Wolf"'s Bruni on a table.

"The Wolf" takes his Bruni.

Owen Matthews (Julian Morris) finds a nickel plated Colt Lawman Mk III with black grips from Rich Walker's (Jon Bon Jovi) office at one point. "The Wolf" is seen shooting Owen Matthews with one in an imaginary sequence, as the main group plays Cry Wolf. He also uses the gun to execute a victim in the beginning of the film. Mr. Walker also handles the Lawman, as does Dodger (Lindy Booth). 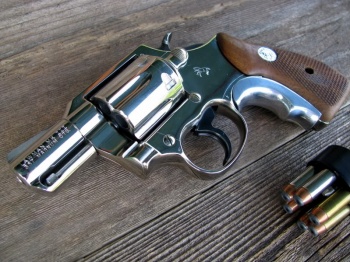 "The Wolf" fires his snubnose revolver.

"The Wolf" with his Lawman in an imaginary sequence.

A cop (Steven Ritzi) pulls out a Glock 19 and aims it at a prankster at one point in the film.

Another cop (Antonio D. Charity) has a Glock 17 in a holster in a police station.

The cop has a Glock 17 in his holster.
Retrieved from "http://www.imfdb.org/index.php?title=Cry_Wolf&oldid=1241307"
Categories: