Chill Factor is a 1999 action film starring Skeet Ulrich and Cuba Gooding Jr. as a pair of ordinary men who are thrust into an extraordinary situation when a dying scientist (David Paymer) entrusts them with a safeguarding a unique chemical weapon from a rogue U.S. Army officer (Peter Firth). The chemical weapon, code-named Elvis, must be kept at temperatures below 50 degrees in order to avoid detonation - which necessitates that the pair transport it across scorching terrain in Montana via an ice cream truck.

The following weapons were used in the film Chill Factor:

Tim Mason draws the Smith & Wesson Model 10 and points it at Arlo.

Tim sits in the ice cream truck with Arlo, holding his S&W Model 10.

Arlo holds Tim's S&W when Tim exits the truck to confront one of the mercenaries.

Deputy Pappas (Jim Grimshaw) uses what appears to be a 4" Taurus Model 689 revolver as his sidearm. It is only seen at the end of the movie, when he roadblocks the tunnel. 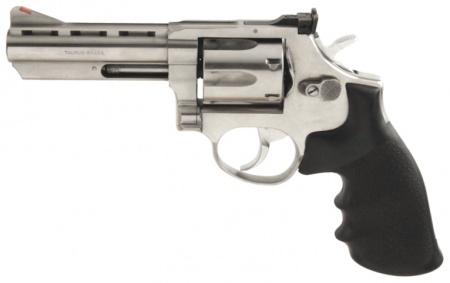 Deputy Pappas draws his Taurus Model 689 at a roadblock.

Pappas listens to Tim and Arlo while holding his Model 689.

Another view, showing the barrel ribbing which suggests that this is a Taurus Model 689.

Rogue U.S. Army Captain Andrew Brynner (Peter Firth) carries a Glock 17 as his sidearm of choice throughout the movie. During the heist of the deadly chemical weapon Elvis, he uses the pistol with a suppressor and a tactical light. His Glock is notable in that it is a 3rd Generation model, which was brand-new on the market at the time of the film's production and release (1999). Along with The Matrix and End of Days (both also released in 1999), this is one of the first-ever appearances of a 3rd Generation Glock in Hollywood.

Brynner points his Glock 17 at Dr. Long in the laboratory. Here, the Glock is fitted with a suppressor and under-barrel light, which do not appear for the rest of the film.

Brynner draws his Glock before chasing Arlo and Tim. This image clearly shows the under-barrel rail on the Glock, which identifies it as a 3rd Generation model (making Chill Factor one of the first-ever cinema appearances of this Glock generation).

Brynner fires his Glock at Tim and Arlo as they flee during the confrontation at the dam.

Most of the mercenaries led by Andrew Brynner (Peter Firth) carry 2nd Generation Glock 19s as their sidearms. Vaughn (Hudson Leick) uses a heavily customized Glock 19 which features a scope mount and a red-dot sight, as well as an under-barrel laser.

Mercenary Burke loads up a Glock 19. Oddly, he is later seen using a two-tone Taurus PT92 instead of this gun.

Vaughn loads up her Glock 19 before the heist.

Vaughn fires her Glock 19 - now fitted with an under-barrel laser and red-dot sight - at Tim Mason during the dam confrontation.

In the tunnel confrontation, Vaughn points her Glock at Tim Mason.

Tim stares down the barrel of Vaughn's Glock. This image shows the under-barrel laser and red-dot optic more clearly.

A two-tone Taurus PT92 AFS is used by Burke (Darcas Macopson), one of Brynner's mercenaries. It is fitted with an under-barrel laser, a nickel-plated suppressor, and a red-dot sight on a scope mount. During the dam confrontation with the U.S. Army, Dennis (Judson Mills) also uses a two-tone PT92, though without suppressor, red-dot sight, or laser. 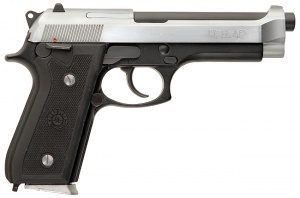 Burke holds his Taurus while accompanying Brynner into the chemical weapons lab lab.

Another view of Burke with his Taurus.

Dennis holds another two-tone Taurus PT92 (likely Burke's gun, minus accessories) during the standoff with the U.S. Army at the dam.

U.S. Army soldiers, including the members of the 75th Ranger Regiment accompanying Colonel Leo Vitelli (Daniel Hugh Kelly), mostly carry M16A1 assault rifles, most fitted with 20-round magazines. At least one of Andrew Brynner's mercenaries is also seen wielding an M16A1 during the confrontation with the Rangers at the dam. The use of the M16A1 - particularly with 20-round magazines - is an anachronistic choice for frontline U.S. military personnel in 1999 (when the movie was filmed and released). By the late-1990s, the U.S. military would have been using the newer M16A2 or (in the case of the Rangers) the M4A1 Carbine; the M16A1 had largely been relegated to Reserve and National Guard units by this time.

COL Vitelli arrives at the lab from which Elvis was stolen; the two Army Rangers accompanying him both carry M16A1s with 30-round magazines.

The Army Rangers ride on helicopters to the dam; the barrel of an M16A1 is visible in the foreground.

Two Rangers carrying M16A1s (one with a scope, both with 20-round magazines) accompany the Ranger Captain at the dam.

The Ranger in the center points at M16A1 at Brynner.

The Ranger on the left points his scoped M16A1 at Brynner at the dam.

Several U.S. Army Rangers in the film carry XM177E2 carbines. As with the M16A1s, these weapons are an anachronism for 1999, the year of the film's release; the Rangers would more likely be using the M4A1 Carbine, or possibly the earlier Colt Model 727 which preceded it.

An Army Ranger stands at attention with an XM177E2 with a 20-round magazine as the military secures the lab from which Elvis was stolen. The soldier to the left of him is holding an M16A1 with 30-round magazine.

Rangers disembark from a UH-1 Huey at the dam; the one about to exit the helo is carrying another XM177.

The Army Captain leading the Rangers during the confrontation with Brynner's mercenaries at the dam is seen using what appears to be an MGC replica of the Remington Model 31, fitted with a top-folding stock.

MGC Replica Remington Model 31 with pistol grip and folding stock from the Remington 870.

The Ranger Captain disembarks from a UH-1 Huey with his shotgun, which appears to be a Remington 31 folder (possibly an MGC replica).

On the right: A better view of the Ranger Captain holding his Remington 31 folder. Note that the cap at the end of the magazine appears consistent with a Remington 31 and not the Remington 870, which would have been more common in U.S. military use in the late-1990s.

Andrew Brynner uses an M72 LAW rocket launcher to blow up a tanker truck and create a roadblock for Tim and Arlo. However, when he asks Vaughn to hand him the launcher, he mistakenly refers to it as an "M79".

Brynner lowers the expended LAW tube after blocking the ice cream truck's path by blowing up a semi-tanker on the road in front of them.
Retrieved from "http://www.imfdb.org/index.php?title=Chill_Factor&oldid=1334154"
Categories: