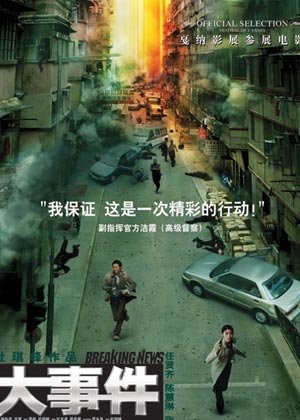 Breaking News (original Chinese Title: 大事件; Cantonese: Daai si gin) is a 2004 film directed by Johnnie To about an attempt by Hong Kong Police to use the media to rebuild their reputation after an embarrassing defeat in a shootout is broadcast all over the news, however, their 'operation' goes horribly wrong.

The following weapons were used in the film Breaking News:

The Taurus PT92 is used by all of the members of Yuan's (Richie Ren) gang, as well as by assassin Chun (You Yong) and his partner. Inspector Cheung (Nick Cheung) later takes a PT92 from one of Yuan's men and uses it when the criminals attempt to escape the apartment building they are hiding in. 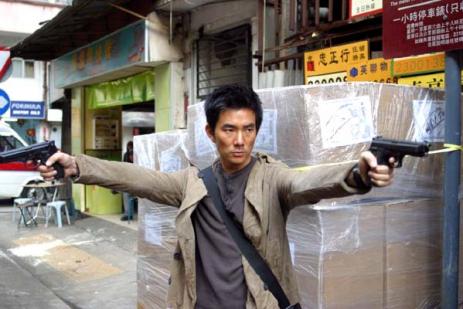 Yuan aims the PT92 at a surrendering police officer.

Chun threatens hostage Yip (Suet Lam) with a PT92 after he tries to flee the apartment.

Inspector Cheung with a PT92 at the end of the film.

The Colt Detective Special is the standard sidearm for all officers of the Criminal Investigative Branch (CIB) in the Hong Kong Police Force, including Inspector Cheung and his partner Hoi (Shiu Hung Hui). Superintendent Rebecca Fong (Kelly Chen) also uses a Detective Special when following Yuan after he escapes from the police cordon.

The Colt Detective Special is seen to the right during the opening shootout.

Hoi readies his Detective Special before entering an apartment.
The last picture is definitely a Smith and Wesson Model 36. The ejector rod is closer to the barrel than the Colt.-saints 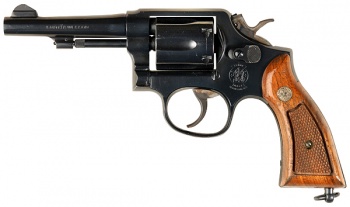 PTU officers aim S&W Model 10s in the final scene of the film. 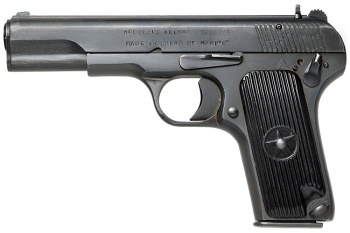 Yuan searches through Yip's apartment with a Type 54 pistol.

The Heckler & Koch MP5A2 is used by Inspector Cheung and another member of his CIB team, as well as by officers of the PTU who initially attempt to raid the apartment that the criminals are hiding in. Due to a continuity error, Cheung's MP5A2 switches from having a Surefire forend during the single-take shootout at the beginning of the film to having none in later scenes.

Cheung notices a blood trail from the criminals' escape vehicle.

A member of Cheung's CIB team advances into the apartment building with a MP5A2.

Officers of the Special Duties Unit (SDU) that arrive to support the PTU units are mostly armed with Heckler & Koch MP5A3 with Surefire dedicated forends. 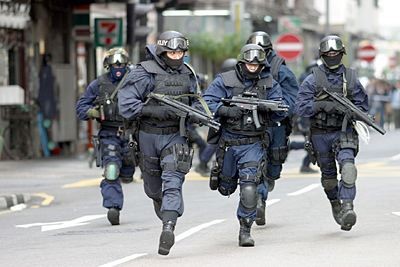 A production photo of SDU operators moving to the target building.

A SDU officer tells Inspector Cheung to pull back.

A SDU officer opens fire on the fleeing suspects.

A SDU officer can be briefly seen with a Heckler & Koch MP5SD3 while securing rescued hostages.

The SDU officer on the far right is armed with a MP5SD3.

A SDU officer with a MP5SD3 secures a hostage.

AK-47 rifles, distinguished by its milled receiver and non-hooded sights, are used by of the criminals during the opening shootout with the police.

One of the criminals leaps from a building with an AK-47.

The criminal lands on a pile of boxes before opening fire on police reinforcements.

Once Yuan's gang flees to the apartment building, their arsenal includes a Kalashnikov with an underfolding stock, possibly either an AKS-47 or AKMS due to its non-hooded sights. When the criminals and the SDU engage in a firefight, the rifle's stock changes from an underfolding one to a Polytech AKS-762 with a Galil-style sidefolding stock.

Yuan's team of robbers, one is holding an AK variant.

Chun and one of Yuan's men surprise each other after the former flees into the hideout.

Chun's accomplice fires at SDU officers with the AKS-47.

A sniper rifle as seen through a video feed.

The same sniper rifle from a different perspective.

Another sniper team with an AR15-style rifle.

Several grenades in a pail full of hot coals that acts as a booby trap.

The M26 hand grenade is also used by the criminals, most noticeably when a wounded criminal tosses one of them at Inspector Cheung.