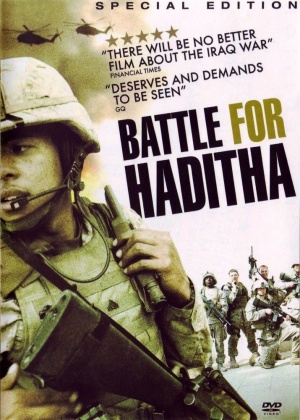 Battle for Haditha is a 2007 British drama film loosely based on the controversial Haditha killings of November 2005. The film was shot in Jordan in 2007, thus keeping an authentic feel with its Middle Eastern locations. The weapons were provided by a British armorer, Bapty & Co. of London, England. Directed by British film-maker Nick Broomfield, the film is shot from the perspectives of U.S. Marines, Iraqi insurgents and the Iraqi civilians caught in the crossfire.

The film stars former U.S. military personnel and Iraqi refugees in many of the main roles. Corporal Ramirez is played by Elliot Ruiz, a former U.S. Marine who was the youngest American serviceman in the Iraq War. Captain Sampson is played by Andrew McLaren, a former USMC sergeant and Iraq War veteran, and the platoon's Navy Corpsman, "Doc", is played by Thomas Hennessy, a former U.S. Navy chief petty officer.

The following weapons are featured in the film Battle for Haditha:

Warning: Some spoilers ahead!

Beretta 92FS pistols (standing in for the U.S. military's Beretta M9) are used by some of the U.S. Marines during their raids. Strangely enough, when an angry mob calls for revenge on U.S. forces after they view an insurgent video about the civilian deaths caused by U.S. Marines, a Beretta 92FS is later seen being brandished by one of the angry Iraqis, when a Russian or Soviet handgun (such as a Stechkin APS or a Makarov PM) would be more appropriate. This may be because the movie's armorer did not have any Russian or Soviet handguns available at the time.

A U.S. Marine (third from left) holds a Beretta 92FS while practicing room-clearing techniques. Note that he maintains proper trigger discipline; his finger is off the trigger.

Corporal Ramirez (Elliot Ruiz) uses a M16A2, modified with a foregrip and front rail system (standing in for the M16A4 MWS), as his main weapon. Other U.S. Marines use M16A2s with ACOG sights attached to the carry handle and vertical foregrips and tactical flashlights mounted on A2-style handguards. Strangely, M16A2s are also seen being wielded by angry Iraqis in the aftermath of the killings; this may be because the movie's armorers may not have had enough AK-47 derivatives on hand.

Corporal Ramirez is armed with an M16A2 while searching a house during a raid. Note that he maintains proper trigger discipline, as the actor portraying him is a former U.S. Marine.

Corporal Ramirez aims his M16A2 following an IED attack. His M16A2 has a vertical foregrip mounted on A2-style handguards, and a tactical flashlight mounted near the muzzle.

Another U.S. Marine aims an M16A2 with an ACOG sight.

Corporal Ramirez fires his M16A2 into a room when looking for the insurgents who had attacked his convoy earlier.

A U.S. Marine holds a M16A2 while detaining an Iraqi man who fired at them earlier.

Strangely, Iraqi militants are also seen brandishing M16A2s. This may be because the movie's armorers may not have had enough AK-47 derivatives to go around.

Some U.S. Marines in the movie, including Sergeant Ross (Eric Mehalacopoulos) carry Colt Model 727s with foregrips and ACOG sights attached to the carry handles. Some of the Colt Model 727s also have front rail systems, standing in for the U.S. military's M4A1 MWS.

A U.S. Marine holds an M727 while standing watch at a forward operating base guard tower. Note the "watch cap" worn underneath his helmet, which is common practice among U.S. Marines.

A U.S. Marine (third from the left) holds an M727 while training.

Sergeant Ross relaxes and uses his M727 as an air guitar while listening to rock music back at the base. To resemble the M4A1 MWS, his M727 is equipped with a front rail system, vertical foregrip, and tactical flashlight.

A U.S. Marine shouts "Reloading!" as he reloads his Colt Model 727 after the IED attack.

A Colt Model 727 is seen slung over the back of a U.S. Marine (in the middle) who is seen evacuating casualties from the IED attack onto a MEDEVAC helo.

A U.S. Marine keeps his M727 aimed at an Iraqi woman (off-screen) who is crying over the body of her deceased loved one (who was shot and killed by U.S. forces), as he covers Corporal Ramirez.

Ahmad points a Type 56-1 at the door of a house adjoining the road where the IED is planted.

Ahmad forces the residents of the house to leave at gunpoint.

Jafar fools around with a Type 56-1 while waiting for the Americans to pass by.

Ahmad and Jafar fire their Type 56-1s as they flee from the attack.

An Iraqi man fires a Type 56-1 after seeing one of his relatives killed by U.S. Marines.

An Iraqi Army soldier returns fire with his Type-56 rifle.

Iraqi men fire Type 56-1s into the air at a funeral.

Ali tells civilians to lie down during a raid.

An Iraqi soldier holds a MPi-KMS-72 while looking for the insurgents.

Angry Iraqis wave MPi rifles. M16A2 rifles are also seen in this scene, strangely enough. This may be because the armorers may not have had enough AK-47 derivatives on hand.

In one scene Cpl. Ramirez examines a FN C9 light machine gun (standing in for the M249 SAW) with a fixed stock, distinguishable by its open sights. The C9 is also seen when U.S. Marines are practicing room-clearing techniques.

A close-up of the barrel shows the distinctive non-hooded sights of the C9 LMG.

A U.S. Marine, second from the left, holds a C9 LMG while training.

A U.S. Marine sets up a C9 before leaving on a mission.

Browning M2HB heavy machine guns are seen mounted on USMC humvees. Note that none of them have any ammunition loaded throughout the movie; this is probably due to the fact that most of the movie's scenes involving M2HBs were shot in crowded public areas, and thus were not loaded, for safety issues, or the film armorer just did not have any ammunition available. The Browning M2HB features in a quite humorous scene in the film, when one mounted on top of a USMC humvee accidentally bumps into the back of a civilian truck, due to the gunner's carelessness.

U.S. Marines man M2HBs while on a desert patrol.

A U.S. Marine mans a M2HB while driving through Haditha.

A U.S. Marine hops into a humvee prior to a mission.

U.S. Marines return to base following a mission. Notice that there are no rounds in the ammo box. This is probably due to the fact that most of the movie's scenes involving M2HBs were shot in crowded public areas, and thus were not loaded, for safety issues.

M203 grenade launchers are mounted on some of the M16A2 rifles used by U.S. Marines.

A U.S. Marine holds an M16A2 with an M203 mounted underneath the barrel while on a foot patrol.

An improvised explosive device (IED) constructed from a propane tank is an important plot point in the film and plays a key role in the story.

An Iraqi insurgent IED, made out of a propane tank.
Retrieved from "http://www.imfdb.org/index.php?title=Battle_for_Haditha&oldid=628554"
Categories: