Batman Forever is the third installment in the Tim Burton-influenced Batman film series. The 1995 film starred Val Kilmer as the Caped Crusader, who is challenged by Two-Face (Tommy Lee Jones) and The Riddler (Jim Carrey). The film also stars Chris O'Donnell and Nicole Kidman. Joel Schumacher (A Time to Kill) took over the directing reins from Burton (who remained as an executive producer on this film).

The following weapons were used in the film Batman Forever:

A chrome-plated Benelli MP95E is the main handgun used by Two-Face (Tommy Lee Jones) throughout the film. 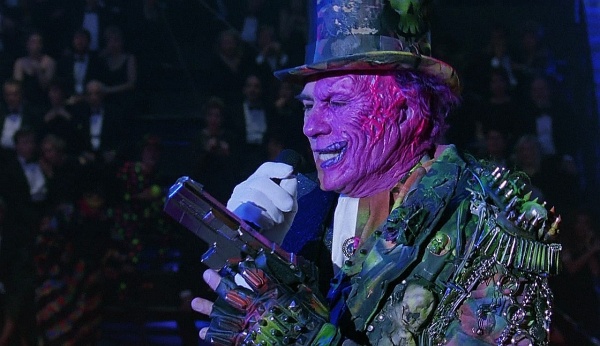 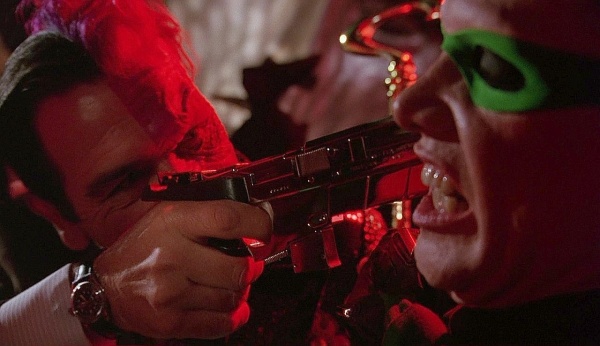 In keeping with his dual personality, Two-Face uses different variants of the .22LR caliber Arminius HW-9 ST, one blued, one stainless, when he crashes the Riddler's reception. It seems the stainless revolver has pearl grips. The one with pearl grips is probably the same used in Hard Rain. 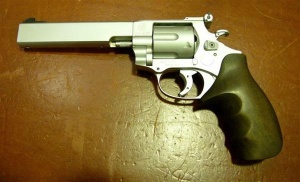 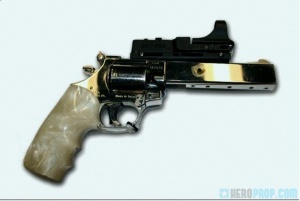 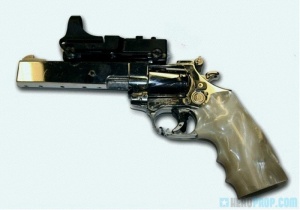 Opposite side view of the hero HW-9 ST from Batman Forever. Image from Hero Prop user "Bill-Q". 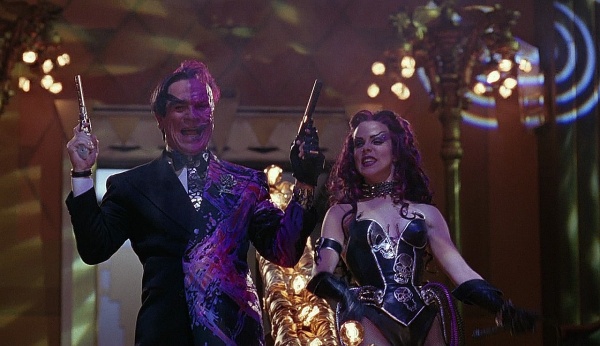 Bruce Wayne (Val Kilmer) experiences a flashback where he sees an assailant shooting his parents with a Colt New Service. The man is credited as "Shooter" (David U. Hodges), but since this film appears to exist in the same continuity as Batman and Batman Returns (since Michael Gough returns in his role of Alfred the Butler, along with Pat Hingle as Commissioner Gordon), the assailant should be Jack Napier aka The Joker, who used a Colt New Service in the original film. 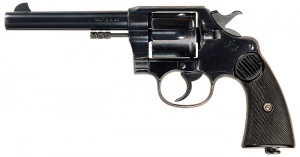 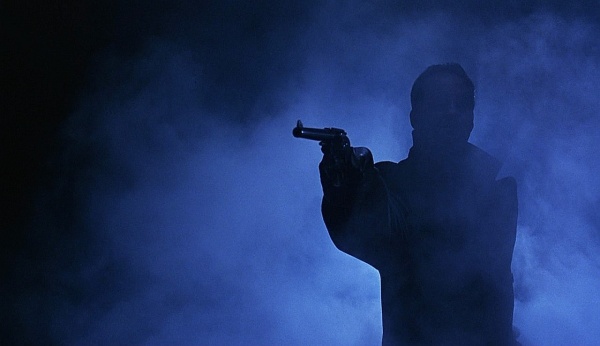 The "Shooter" with his revolver in Bruce Wayne's flashback.

Olympic Arms OA-93 upper receivers fitted on what seems to be M16A1 lower receivers (presumably added to allow the weapons to fire fully automatically in the film) are used by the henchmen of Two-Face (Tommy Lee Jones). The guns are fed from MWG Company "The Ninety Rounder" drum magazines with neon light strips powered by two 9v batteries, which are activated by switches on the rear of the magazines. Two-Face later uses the weapon while at the circus performance. 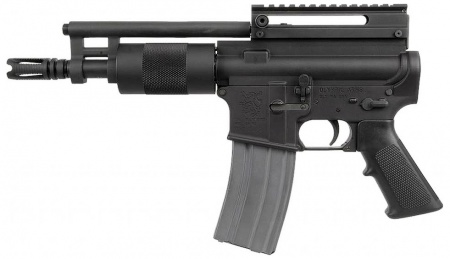 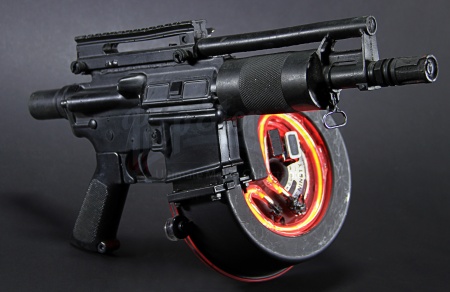 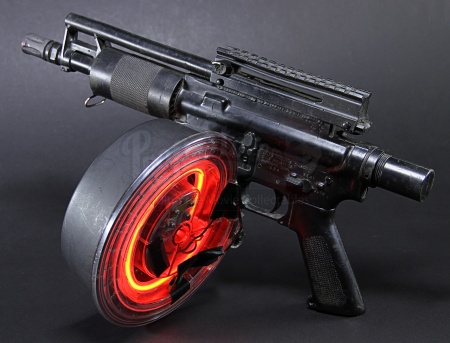 Opposite side view of the stunt OA-93/M16A1 Hybrid from Batman Forever. Image from Prop Store of London. 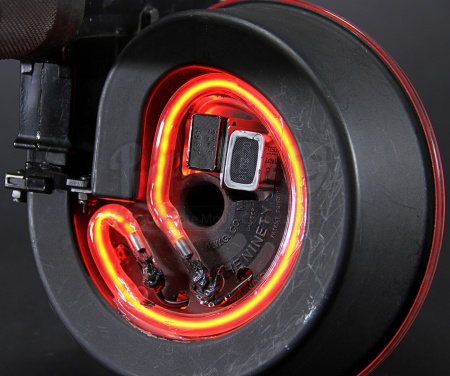 A close-up of the neon detailing of the stunt OA-93/M16A1's magazine (which, unusually, appears to not be made of rubber) from Batman Forever. Image from Prop Store of London. 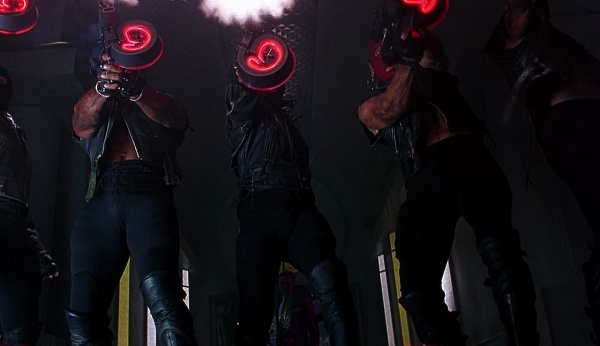 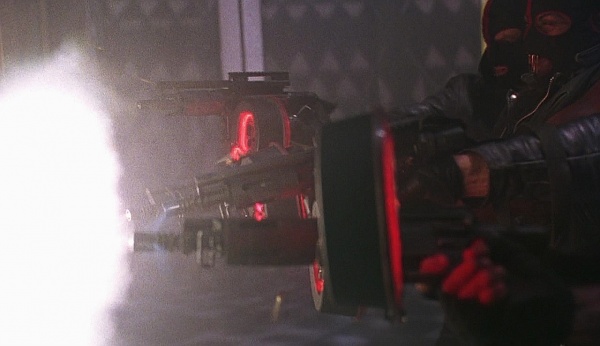 The henchmen firing the OA-93/M16A1 Hybrids. 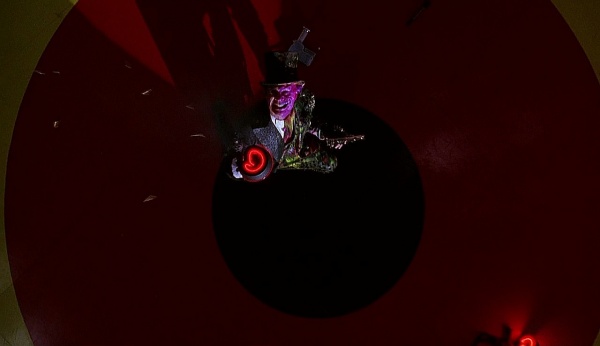 Two-Face (Tommy Lee Jones) later uses the weapon while at the circus performance.

The M16A2 rifles are briefly seen in the hands of the Gotham SWAT team when Batman arrives at the beginning of the film. 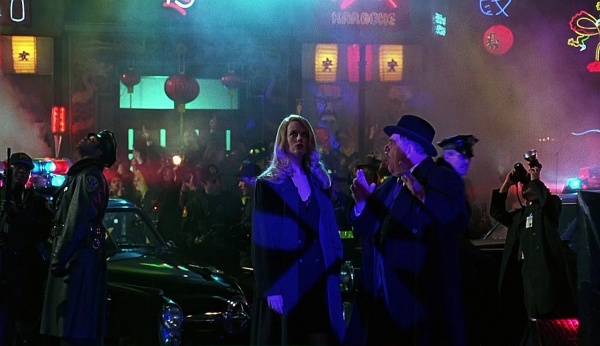 A Gotham officer on the far left is seen with an M16A2 as Dr. Chase Meridian (Nicole Kidman) and Commissioner Gordon (Pat Hingle) discuss the situation.

M134 Miniguns are dual-mounted on the cars of Two-Face's henchmen when they chase the Batmobile. 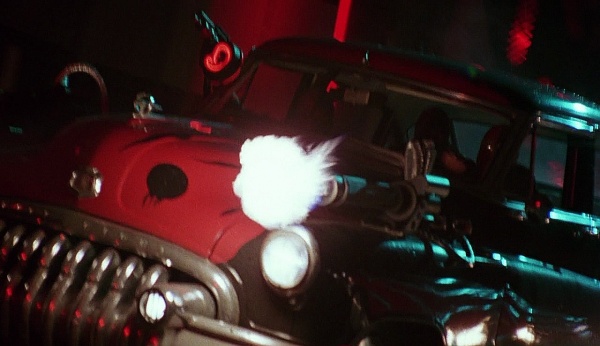 At one point, Two-Face uses a Type 69 RPG (distinguishable by the carrying handle) to try and take out the Batmobile. 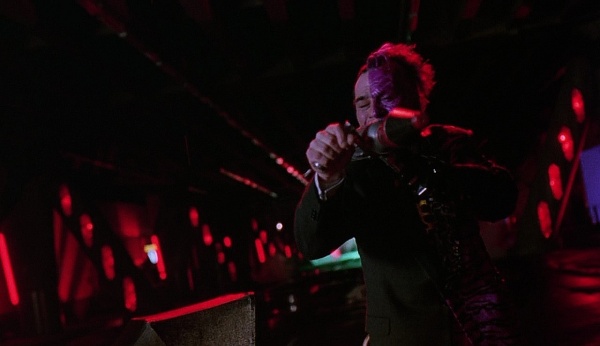 Two-Face launches an RPG at the Batmobile.