Badland is a 2019 Western movie written and directed by Justin Lee. A decade after the American Civil War, a Pinkerton detective Matthias Breecher (Kevin Makely) travels to the West with a mission to track down several Confederate war criminals and carry out the death sentence. But meeting with the daughter of one of those men changes Bricher's plans.

The following weapons were used in the film Badland:

Dandridge draws his revolver during the shootout in the barn.

Breecher carries one of his revolvers in shoulder holster.

Hector holds his revolver in the scene at Cooke's house.

An unnamed Quaid's henchman holds his revolver in the same scene.

Breecher holds his revolver during the shootout with Quaid's henchmen.

Another view of Breecher's revolver.

Breecher grabs Mortenson's revolver from holster and fires it.

Breecher reloads one of his revolvers. The grip of the second revolver is also seen. 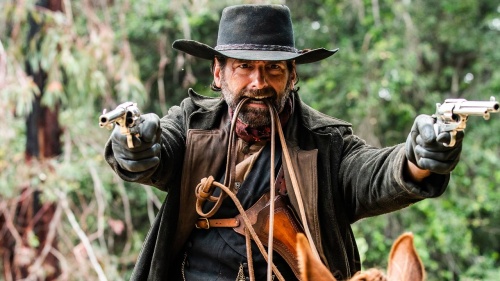 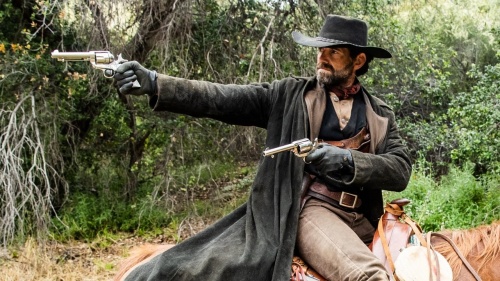 An unnamed Sheriff's deputy takes a prostitute as hostage.

The barrel of the revolver is seen when the man is gunned down.

A townsman carries a "Civilian" (judging by the length of the holster) revolver with deep blue finish and stag horn grips.

A Single Action Army revolver in holster of a man in the saloon turns out to be an Umarex airsoft gun, judging by the screw hole of the CO2 cartridge compartment in the grip. 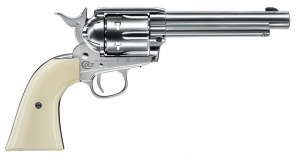 A man at the right carries an airsoft SAA revolver in holster.

In one scene Breecher's revolver is substituted with a mockup gun.

The grip of the mockup, supposedly wooden revolver is seen. 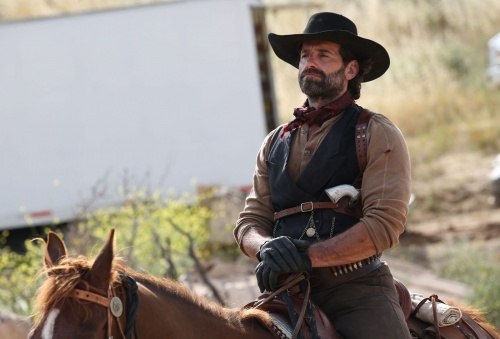 Same mockup gun is seen on a production still.

A good view of Cooke's revolver.

He lowers the revolver.

Sheriff Wainwright fires at a prostitute.

Sheriff carries his revolver in holster.

Sheriff carries his revolver during the showdown. When he draws the gun, it is seen only in far distance. 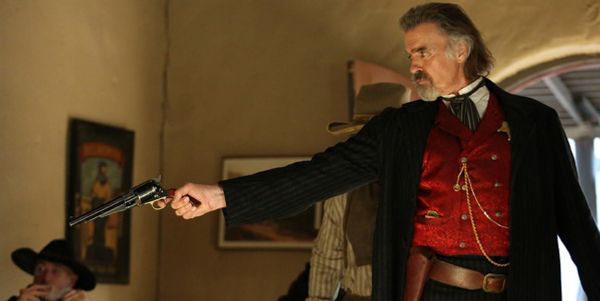 A Smith & Wesson Model 3 revolver is a handgun of a gambler in the saloon.

A Smith & Wesson Model 3 revolver is seen at hand of a gambler.

One of the saloon patrons carries a long barreled revolver that may be a Single Action Army "Cavalry" model or a cartridge conversion 1851 Navy or 1860 Army.

One of Gen. Dandridge's henchmen is armed with an open-top cartridge revolver that may be a Colt 1872 Open Top or some cap and ball revolver with Richards-Mason Conversion.

A man in center draws his revolver.

He has no chance to shoot, being gunned down.

Breecher holds his Spencer carbine. The pearl grip of the revolver in shoulder holster is also seen.

Breecher holds his carbine when he approaches Cooke's house and is met unfriendly.

A close-up of the carbine.

Breecher holds the carbine during the shootout with Sheriff's deputies. 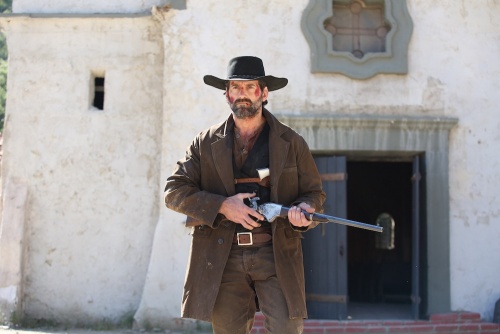 Matthias Breecher holds the Spencer 1860 carbine on a promotional image.

She lowers her gun.

Sarah fires the rifle during the shootout with Quaid's henchmen.

She reloads the rifle. The spent cartridge is seen in the midair.

A deputy holds a Henry rifle.

A Henry rifle is seen in the gun rack in Sheriff's office together with a Colt 1878 shotgun. 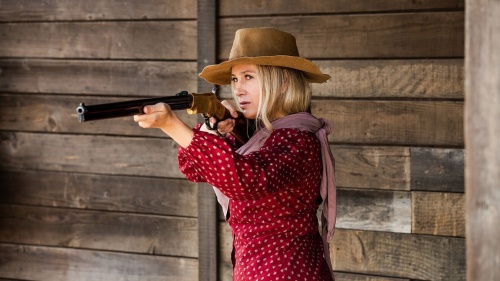 Sarah Cooke holds the Henry rifle on a promotional image.

A shotgun is seen in the gun rack in Sheriff's office together with a Henry rifle.

Sheriff Wainwright holds his shotgun during the showdown.
Retrieved from "http://www.imfdb.org/index.php?title=Badland&oldid=1476593"
Categories: