The following weapons were used in the film A Man Called Blade (Mannaja):

Numerous characters, including Mannaja (Maurizio Merli), Voller (John Steiner) and all of his henchmen, carry Single Action Army revolvers. Voller, one of all, carries two revolvers with pearl grips.

Mannaja draws his revolver during the encounter in the bar.

Three of Voller's men with revolvers.

Ed McGowan's bodyguard holds his revolver during the shootout in mining camp.

A close view of Mannaja's revolver.

Voller draws one of his pearl-grip revolvers. 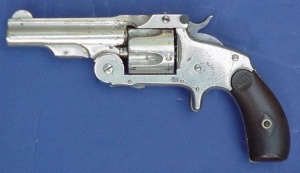 Numerous characters, including Mannaja (Maurizio Merli), use Winchester Model 1866 "Yellow Boy" rifles. As the movie was filmed in Italy, the rifles appear to be modern Uberti replicas.

McGowan (Philippe Leroy) aims his Winchester in a flashback scene.

A guard of the mail-coach fires his rifle at pursuing highwaymen.

Dahlman (Antonio Casale), the chief of highwaymen, fires his rifle.

Mannaja fires his rifle during the shootout in mining camp.

When running dry, Mannaja uses his rifle as a club.

Dahlman and one of his men (Riccardo Petrazzi) with "Yellow Boys".
Retrieved from "http://www.imfdb.org/index.php?title=A_Man_Called_Blade_(Mannaja)&oldid=932909"
Categories: