The Avatar WASP Gun has been used in the following 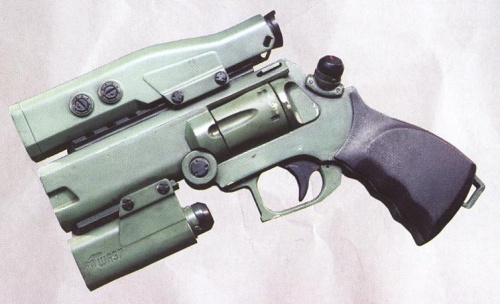 The Sn-9 Wasp uses 9 millimeter hyper-velocity sabot rounds and is loaded from speedloaders. The Wasp includes options for a detachable light and scope with IR, movement sensing, and Gyroscopic-stabilized aiming system accurate to 135 meters. is more powerful then the stander RDA Handgun but can only be acquired privately as a non standard issue weapon.

The original prop was actually assembled around a Ruger GP100 .357 Magnum using CNC machined alloy housings over top of the real weapon. Hammer tang was cut off meaning it could only be fired double action and the prop was design to appear as though it has a break-open action, however it retains the "flip-out" cylinder of the donor weapon (at some considerable technical effort) in order for it to be able to be loaded and fired (blanks). There was only ONE hero prop, and at least one stunt prop (distinguishable by the back of the trigger being filled in as in pic below).