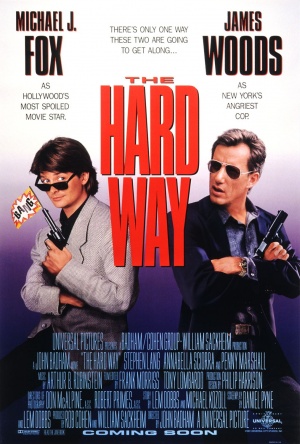 The Hard Way is a 1991 action comedy starring Michael J. Fox as Nick Lang, a spoiled Hollywood action star who thinks he can nab a serious acting role by hanging out with veteran NYPD Lt. John Moss (James Woods) and learning what how to act like a real cop. Moss reluctantly must escort Lang around the city while trying to track down a serial killer who calls himself "The Party Crasher" (Stephen Lang). The film was directed by John Badham (Blue Thunder) and is notable for being one of the first films to feature the Glock 19.

The following weapons were used in the film The Hard Way:

Lt. John Moss (James Woods) uses a 9mm Glock 19 as his sidearm. At one point in the film, the Party Crasher gets ahold of it and shoots at Nick Lang (Michael J. Fox). This is one of the first appearances of the Glock 19 model in any media.

NYPD Lt. John Moss (James Woods) uses a 9mm Glock 19 during a encounter with the Party Crasher at the film's beginning. This is one of the first appearances of the Glock 19 model in any media.

Moss draws down on a subway punk with his Glock.

Moss draws his Glock on the Party Crasher in a movie theater.

The Party Crasher (Stephen Lang) uses a customized Wildey semi-automatic pistol chambered in .45 Winchester Magnum as his primary murder weapon. It is mentioned in the film that the pistol was loaded with hollow point Glaser safety bullets and is fitted with a laser sight.

A closeup of the Wildley.

The Party Crasher tries to acquire a Wildley from a gun dealer.

NYPD uniformed officers are armed with the Smith & Wesson Model 10 with a 4" barrel in the film. This revolver is also seen in the hands of Nick after a crash in an NYPD cruiser.

When Nick Lang explores Moss's apartment, he finds a snubnosed .38 Smith & Wesson Model 10. At one point where Moss tries to grant Lang's wish of knowing what it's like to kill someone, he loads it with blanks and Lang "shoots" a street worker. The S&W is also carried by Detectives Billy (L.L. Cool J), Ben Pooley (Luis Guzmán), Grainy (John Capodice) and China (Mary Mara).

Lang poses in front of the mirror with Moss's S&W.

At the film's beginning, Nick Lang (Michael J. Fox) in his role as Joe Gunn is seen wielding what appears to be a Walther PP in a trailer for his film Smoking Gun II.

At the film's beginning, Nick Lang (Michael J. Fox) in his role as Joe Gunn is seen wielding what appears to be a Walther P38 in a trailer for his film Smoking Gun II.

During a shootout at a subway stop, a teenage mugger (Johnny Sanchez) attempts to shoot Moss with a .32 Walther PP. When Nick thinks that the pistol was out of bullets, Moss shows him that the pistol had a misfire.

The mugger (Johnny Sanchez) tries to use his Walther against Moss.

The SWD/Cobray Street Sweeper is one of the weapons wielded by Asian gangsters who confront Nick.

Some of the officers are seen armed with the Ithaca 37.

The Norinco Type 56-1, noted by the hooded front sight and under-folding stock, is one of the weapons wielded by Asian gangsters who confront Nick. The rifle is fitted with an AKM-style muzzle brake, making it likely that it was a semi-auto Chinese import, fitted with the slanted muzzle by the gun's importer and converted to full-auto for the film.

A full size Uzi is another one of the weapons wielded by Asian gangsters who confront Nick.

The MAC-10 is another one of the weapons wielded by Asian gangsters who confront Nick.