The Armsel Striker shotgun and its variants appears in the following films, TV shows, and video games used by the following actors:

Fire Modes: "Clockwork" tension-operate drum on most models, manual operation only on Protecta

The original Armsel Striker is a South African-manufactured cylinder shotgun, designed by Rhodesian Hilton Walker in the 1980s. Production was financed by the Armsel company, but actual production was done by another company called Aserma Manufacturing. Various versions existed, some with the top-folding stock, and others without.

The Striker featured a unique revolver-like cylinder drum, giving it a rather high capacity for the time at 12 rounds. Unlike a revolver, the cylinder isn't turned by the trigger itself (which would give the weapon an extremely heavy trigger pull); instead, the drum is wound up with a clockwork mechanism, and every time the trigger is pulled, the tension from the mechanism turns the cylinder.

Reloading the Striker is a long and drawn-out process; the Striker lacks an automatic extraction system, and the user needs to manually extract spent casings with an ejector rod, load in new rounds one by one (manually advancing the drum with the rear drum advance lever), and finally wind up the drum with the knob in front of the drum.

Strikers are identified not only by the unique 'knob' that serves as the winding key in front of the drum, but also the drum advance lever on the back of the receiver. The Cobray guns don't have this lever.

The Armsel Protecta is an improved version of the original Striker designed for quicker reloading. It features an auto ejection mechanism, whereby some of the propellent gasses are vented off into the chamber and used to blast the previously fired shell backwards out of the ejection port into a large shell deflector, which is the most obvious external difference between the Protecta and the original Striker (the original Striker had to manually eject its fired rounds via an ejector rod).

In order to prevent a live shell being ejected when a fully loaded Protecta is fired, a special loading gate was added which prevents the first round being ejected, but opens as the drum rotates after the first shot so subsequent empty shells are ejected. Because a used shell is only ejected when the next round is fired, the last shell in the drum still has to be manually advanced to the ejection port position and ejected with the ejector rod.

The clockwork mechanism on the drum was also removed in order to speed up reloading (resulting in the deletion of the winding key and also the rear drum advance lever). The drum of the Protecta is manually advanced after each shot by rotating the entire barrel shroud and attached forwards grip slightly to the right and then back again. Due to this the Protecta is not actually a semi-automatic shotgun so any depictions of it as such are incorrect.

SWD/Cobray Street Sweeper with short barrel and top folding stock - 12 gauge. Note the Cobray logo on the side.

SWD/Cobray Street Sweeper with 18 inch barrel - 12 gauge. Because all legally owned Street Sweepers in the United States are "destructive devices," very few remain in this configuration as there is no law governing the required barrel length of a DD.

The Street Sweeper is the American-made copy of the Striker; the standard commercial version was recognizable by its longer 18" barrel, which was necessary to comply with U.S. firearms laws for over the counter shotgun sales. There were short barreled versions of the Street Sweeper, but like all short barreled shotguns, it required a tax stamp and was a strongly regulated device. When the Clinton Administration declared the civilian version of the Street Sweeper to be a 'destructive device' (like a mortar or a rocket launcher) in 1993, nearly all commercial sales ceased, all existing owners were contacted by the ATF with demands to register their weapons, and the remaining samples in the chain of commerce could only be sold to holders of Federal Destructive Device Permits.

Although it is a copy of the Striker, there is a relatively low interchangeability of parts between the two guns. The Sweeper lacks the rear drum advance lever of the Striker and has its own distinctive key in the front of the drum to wind the 'clockwork' mechanism like the original Striker shotgun. The Sweeper's winding key has an oblong, flat grip, as opposed to the thicker, more squared key of the Armsel or Sentinel Strikers.

The Street Sweeper is usually seen in American action films, whereas the Striker and Protecta are more likely to appear in films made outside of the U.S. 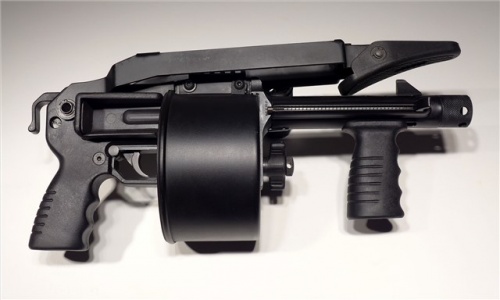 The Sentinel Arms (later Penn Arms, now a part of Combined Systems) Striker-12 is a licensed American version of the Armsel Striker (Cobray's Street Sweeper was a cheap knock-off copy of the Striker). Patent rights to produce and sell the Striker in the United States was purchased from Armsel by Grant W. Stapleton of Sentinel Arms Corporation in the early eighties, who then upgraded the shotgun to commercial U.S. standards.

The Striker-12 improved on the Armsel design, featuring an improved winding key and the addition of a thumb tab on the right side of the drum magazine next to the trigger guard, used to open and close the ejection port (which is the distinguishing feature differing the model from all other variants). Unlike the original Striker, initial models lacked the rear drum advance lever; the manual instead tells the users to advance the drum with the winding key during reloads.

A large number of video games depict the ejection port button as a drum advance lever, following its depiction as such in the 2009 video game Call of Duty: Modern Warfare 2. There is no evidence that this works in reality.