Wolf Warriors is a 2015 Chinese action thriller film. Jing Wu (吴京) is director and the protagonist of the film, and stars Nan Yu (余男), Ni Dahong (倪大宏) and Scott Adkins. The film tells a story of the battle between the special forces operators of Chinese PLA and well-trained foreign mercenaries hired by a Southeast Asian terrorist group. This is the first Chinese film that featured foreign forces and many actors in this film are Chinese special forces operators in active duty.

The following weapons were used in the film Wolf Warriors:

The SIG-Sauer P226 is seen used by "Tom Cat" (Scott Adkins) and his mercenary team members. Wu Ji (Zhou Xiao-ou) also uses a P226R at the beginning of the film to take a hostage. The P226 used in the film appears to be an airsoft gun, judging by the magazine design and the brass inner barrel.

"Tom Cat" with his handgun.

"Tom Cat" with his empty sidearm. Note the brass inner barrel in this model, it may have replaced the real-firing model when put into a non-firing scene.

Wu Ji takes a hostage with his pistol.

The weapon is pointed at the hostage. Note the brass inner barrel in the pistol.

Wu Ji fires his P226R at a downed PLA soldier.

"Cowboy" has his arm with the P226R pinned by a knife, which gives us a good look at the weapon. 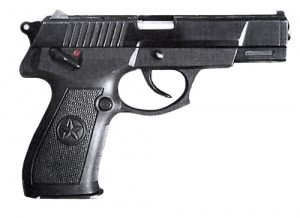 A first-person view of a Chinese police officer with a ballistic shield and his QSZ-92 getting knocked back by an explosion.

Southeastern Asian police officers with the ballistic shield have their sidearms drawn.

A PLA soldier setting up his pistol.

Li Zhijun (Ma Qiang) attempts to shoot himself with his QSZ-92.

Leng Feng (Jing Wu) draws his sidearm and cycles the slide with his boot.

Shao Bing (Zhang Yongda) uses an airsoft Tercel M1911A1 pistol against a mercenary. This is a continuity error as he is seen with the QSZ-92 in the next scene. 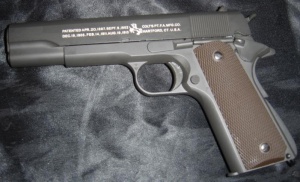 "Assassin" has a Tokyo Marui Desert Warrior 4.3, an airsoft pistol based on the MEU(SOC) pistol, as his sidearm. 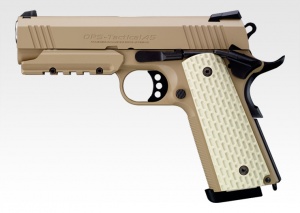 "Assassin"'s Desert Warrior in his holster.

"Assassin" with his Desert Warrior as he's shot. You could see the rails on the bottom of the pistol.

A Southeastern Asian country's police officer in the bust on Minh Deng (Ni Dahong) carries a Glock 17 as his sidearm.

A Southeastern Asian police officer with his Glock 17.

A criminal at the beginning of the film uses a Glock 19 to fight off the police.

A criminal with a Glock 19 gets shot.

The Norinco QBZ-95 assault rifle is seen in the hands of PLA soldiers. Some rifles are modified, with RIS system, foregrips, flashlights and lasers fitted. A custom QBZ-95 with a FAMAS-style railed carry handle and under-barrel rail with foregrip also appeared in the hands of Shao Bing. Leng Feng picks up a regular one with a bayonet during the training exercise to fight off a wolf pack.

A PLA soldier with his suppressed QBZ-95.

A first-person view of a PLA soldier with his suppressed QBZ-95. This one has a laser fitted near the handguard.

The Wolf Detachment, a majority are equipped with the QBZ-95.

Two PLA soldiers on the right guarding the perimeter with their QBZ-95s.

A line of PLA soldiers with their QBZ-95 rifles.

PLA soldiers with their QBZ-95s.

Norinco Type 56 rifles with milled receivers are seen used by Minh Deng's (Ni Dahong) troops as their standard weapon. Leng Feng (Jing Wu) and Minh Deng both use the Type 56 near the end of the film. In the final confrontation, Leng fixed a bayonet that was taken from a criminal on his captured Type 56. However, this would be impossible because the bayonet on a Type 56 rifle cannot be attached or unattached without a tool since the Type 56 normally would have an under-folding bayonet.

Minh Deng's men with their Type 56 rifles. Some seem to be non-firing replicas.

Minh Deng's men about to fire their Type 56s.

A PLA soldier with his Type 56 runs to aid a wounded comrade in the Sino-Vietnam War flashback.

A Vietnamese sniper uses a Type 56 as a marksman rifle against PLA soldiers.

Leng Feng (Jing Wu) fires a Type 56 automatically from behind a human shield. The gun is firing full-automatic in this scene, but the selector switch is on semi-auto.

Leng Feng attaches a bayonet onto his captured Type 56 in a last-ditch attack.

Leng Feng on the right with his bayonet-fitted Type 56.

Two criminals open fire at the police with their Type 56-1 rifles with railed handguards.

"Driver" opens fire at the Southeastern Asian police with his modified Type 56-1 rifle.

"Cowboy" and "Monkey" engage the Southeastern Asian police with their Type 56-1 rifles.

"Cowboy" firing his Type 56-1. Here we see the gun has a flashlight, red dot sight, and an angled foregrip.

Leng Feng's father holds his Type 56-1 with a stamped receiver in the Sino-Vietnam War flashback.

One of Minh Deng's men holds a modified Type 56-1.

A Type 56 Carbine (Chinese SKS rifle) can be seen in the flashback of the Sino-Vietnam War. Minh Deng's (Ni Dahong) men are also equipped with Type 56 Carbines.

The SKS lies next to the downed platoon commander as a soldier tries to get him to safety.

The SKS still on the ground.

The SKS on the bottom left next to the platoon commander. Distinguishable with the three holes in the handguard. On the right, the soldier in the middle also firing an SKS.

Minh Deng's men, most of which have the Type 56 Carbine.

Minh Deng's men with a mixture of Type 56 rifles and carbines. The Type 56 Carbines could be distinguished with the darker wood stock color.

The Southeastern Asian country's police unit sent to arrest Minh Deng (Ni Dahong) are mostly equipped with the Mk 18 Mod 0 carbines with Magpul BUS or LMT rear sight, foregrip, and Crane stock. Most of these guns seem to be airsoft replicas. "Driver" (Sona Eyambe) also appears to use a Mk 18 with an M203A1 grenade launcher. The Mk 18 used by "Driver" might be a Norinco CQ-A carbine with a 10.5-inch barrel, CQ carbines with this configuration can be seen used by Chinese Chongqing SWAT officers in real life.

The police officers with their Mk 18 carbines.

The police officers securing Minh Deng have the Mk 18 carbines. The officer on the left has the 6-position stock on his gun.

The police officers firing at Minh Deng's foreign mercenaries. Here you can see the white trademarks on the Mk 18.

The police officer with his Mk 18 carbine. Here you can see the use of a "hi-cap" magazine used in airsoft by the winding wheel on the bottom.

Another police officer with his Mk 18, which has white "MARINE ENV.M-4" trademarks common in airsoft. Note that a rear sight isn't deployed.

"Monkey" (Kyle Shapiro) on the bottom left with a customized Mk 18.

"Cowboy" keeps overwatch with his Mk 18 with an ACOG sight and an angled foregrip, which he isn't using at the moment.

"Driver" is wounded while firing his Mk 18.

"Monkey", fatally wounded, with his Mk 18 on his side. This gun is equipped with a vertical foregrip.

A scoped M14 rifle is used by "Assassin" (Samuel Thivierge). This rifle is probably an M305, an M14 clone made by Norinco.

"Assassin" with his sniper rifle.

A Norinco CQ assault rifle is used by "Tom Cat" (Scott Adkins) as his primary weapon. The rifle has numerous accessories, including a red dot sight, laser aiming device, tactical flashlight, foregrip and a custom paintjob.

"Tom Cat" aims the Norinco CQ. Here we can see the A1 model forward assist.

Another angle of the Norinco CQ in the same scene.

"Tom Cat" and his empty weapon.

"Cowboy" has a Norinco CQ-A Carbine.

A young Leng Feng is seen holding a toy rifle when he watches his father leave for the Sino-Vietnam War. It cannot be a real rifle because firearms are prohibited strictly in People's Republic of China since its founding. Homemade or commercial toy rifles based on SKS or Arisaka rifles were very popular among Chinese boys during 1960s-1980s. However, these toys are illegal in mainland China nowadays.

A young Leng Feng with what appears to be a toy rifle in his hand.

A young Leng Feng with his toy rifle.

Shi San-ba holds his QJB-95 during an ambush.

A mercenary called "Crazy Bull" (Kevin Lee) uses an M60E4 machine gun. It might be a non-firing replica.

"Crazy Bull" with the minigun.

A heavily modified Norinco QBU-88 is used by Leng Feng (Jing Wu) in a drug-bust at the beginning of the film. A suppressor, a flat-top rail system and a Swarovski scope are mounted on it. He also uses one in a training exercise before it gets shot out of his hand.

Leng Feng with his QBU-88 in a concealed position.

Leng Feng aims at a guard through the scope.

Leng Feng aims his QBU-88 in a new position. In this scene, the QBU is replaced by a rubber prop (note the seam on the scope) as actor Jing Wu had just done some parkour with the rifle slung over his back.

Leng Feng takes aim with his QBU-88. Compare this scene's gun smoothness and finish to the rubber prop in the above image.

Leng Feng with his flat-top QBU-88, where he equipped a scope.

Leng Feng's QBU-88 gets shot by the mercenary sniper.

A Barrett M99 .50 cal long range anti-materiel rifle is used by "Assassin" (Samuel Thivierge) during the rescue of Minh Deng (Ni Dahong). This Barrett M99 is probably a non-firing replica as the sniper is never shown actually firing it, only cycling the bolt.

"Assassin" standing up with his M99.

"Tom Cat" (Scott Adkins) uses a Pansarskott m/86 variant of the M136 AT4 during the rescue of Minh Deng (Ni Dahong). "Crazy Bull" (Kevin Lee) and another mercenary use ordinary AT4s in an attempt to shoot down Chinese attack helicopters pursuing them.

Pansarskott m/86, Swedish Army model of the M136 AT4 with folding foregrip - 84mm

A mercenary prepares to fire the AT4.

The AT4 rocket flies.

"Crazy Bull" fires the AT4 at a helicopter.

A graphic representation of an AT4 rocket.

A Norinco QLZ-87 grenade launcher is seen mounted on a Chinese armored vehicle. 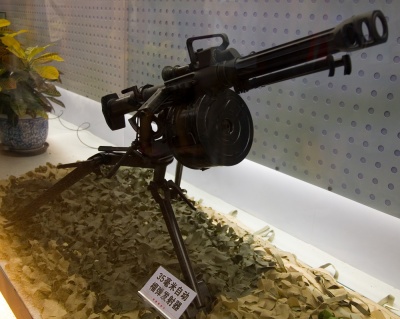 As Shao Bing, Deputy Commander of the Wolf Detachment, gets off the vehicle, we can see the side of the QLZ-87.

Wu Ji (Zhu Xiao) uses two M26 hand grenades at the beginning of the film to fend off the Chinese police and the PLA. M26 grenades are also issued to the PLA and the Wolf Detachment when they hunt the mercenaries. 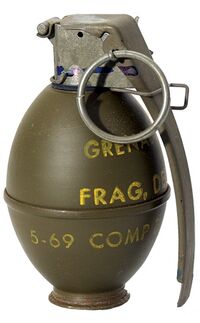 A supply box with M26 grenades.

Type 82 hand grenades are issued to the PLA and the Wolf Detachment when they hunt the mercenaries. 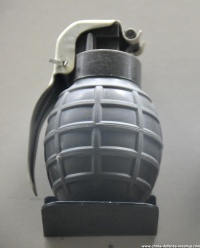 "Tom Cat" uses a few of MK3 offensive hand grenades to set up traps for the PLA.

"Tom Cat" sets up a trap with an MK3 grenade.

"Tom Cat" sets up another trap.

A bounding anti-personnel mine is used by the mercenaries to ambush PLA troops.

The mine bounces into the air.

An M18A1 Claymore lies in wait for the PLA.

"Tom Cat" also sets up an MD-82 mine that was later triggered by Leng Feng.

"Tom Cat" sets up the mine.

An MD-82 under Leng Feng's foot on a monitor.

Leng Feng on the mine.
Retrieved from "https://www.imfdb.org/index.php?title=Wolf_Warriors&oldid=1545161"
Categories: