Do not upload new images of weapons when we already have an image for it. That just takes up unnecessary server space. Please go through the 3rd Birthday page and replace those weapon images with the ones from the weapons pages so that the mods can delete the duplicates you uploaded.--PistolJunkie 09:21, 21 September 2011 (CDT)

My apologies, but could you specify the images that are duplicates? I used existing pics where I could but could not find entries for the AK-101, AK SOPMOD or some of the Remingtons.

Two things; one, when someone leaves you a message, you respond on their talk page so that they are notified of your reply, and you sign your posts using the second-to-last button above the edit window. And second; seriously? The Remington 1100 is the second image here, the AK-101 is here, the XM109 image is already on the site, the AR-10 you uploaded has a near-identical configuration to the Armalite AR-10SB, and we have plenty of images of railed AKs on the AK-47 talk page (that image you uploaded isn't an AK-47 SOPMOD, it's just an airsoft AK with rails. The real AK-47 SOPMOD also has a completely different stock, grip and handguard.)
Also, you need to add text, links and screencaps to the page. A page that contains nothing but some pictures simply doesn't cut it.--PistolJunkie 14:21, 22 September 2011 (CDT)

All right, dear, no need to be a prick about it.

You can be defensive and a smarmy all you want, but the simple fact is that the page is not up to snuff, and when many of us put a lot of effort into pages to make the site look good, and new users show up and create halfhearted pages and expect others to finish them, it tends to rub us the wrong way. Also, you might want to reread my post; namely the part about using user talk pages and signing posts.--PistolJunkie 11:58, 23 September 2011 (CDT)

It's a bit too early to make a page for this film as it's not even confirmed that she'll use this weapon in the film. Thus, the screenshots will be put into the discussion for now until a trailer is released. --Ben41 04:55, 30 September 2011 (CDT)

The images are great for now. We will replace them when they release the game. I did apply for the beta, but it turned out that it is only for French, German and British players :( - bozitojugg3rn4ut 15:26, 10 January 2012 (CST)

Hi. In the future, please do not upload gun pics with copyright logos or watermarks on them. Thanks. bozitojugg3rn4ut 06:37, 9 February 2012 (CST)

Could you add the name and calibre captions to the stock images you're adding, as with the other stock images on the page? That's the standard for gun pages. I would, but I have beer and it's more important. Evil Tim (talk) 08:30, 17 January 2013 (EST)

Sure, I'll change them back.Temp89 (talk)

I'm afraid not, the unnamed weapons are those in the blacked out Classified tabs that can be seen due to a glitch to do with customizing an unlocked weapon in the same menu. Some players have them working in game but the textures and animations are unfinished. Temp89 (talk)

This upload for MGSV: 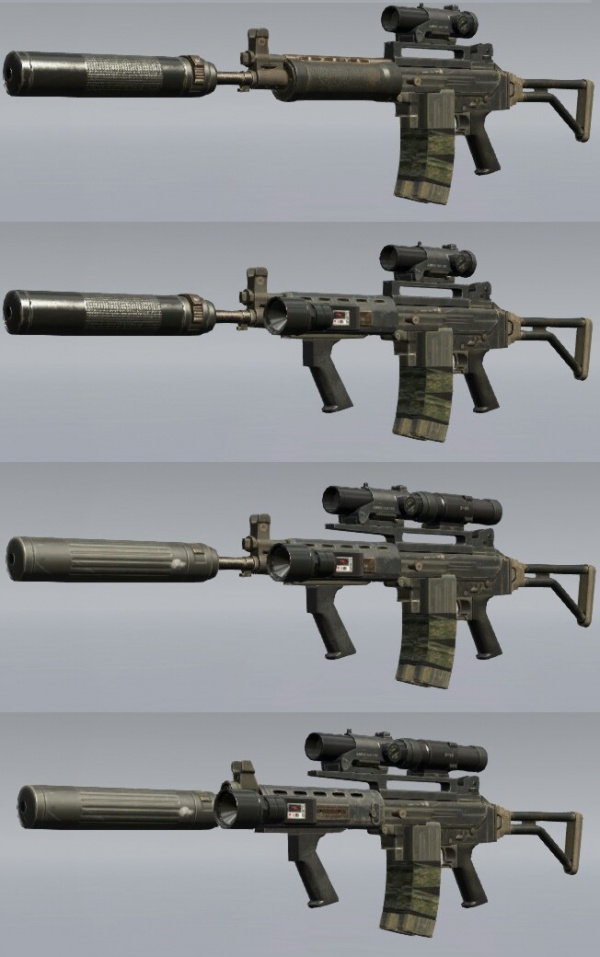 oh dear, so I have. Unfortunately I've uninstalled TPP.Temp89 (talk)